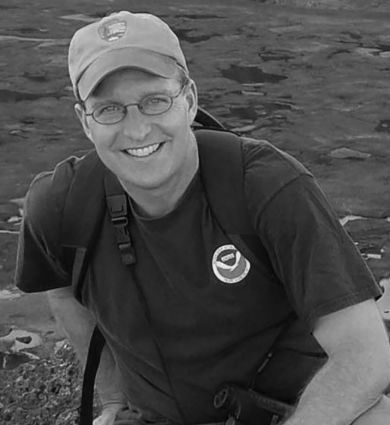 The National Park Service has a fantastic mission, and it’s much more diverse than most people realize. It impacts so many parts of the country and society.”

Jon Putnam (MS '93) has served in several roles over the past nineteen years while in his position of International Park Affairs Specialist at the National Park Service (NPS), including Deputy Field Officer in Puerto Rico, Biologist Detailee in the Biological Resources Division, and a Chief of Natural Resources. Prior to his current position with NPS, he served as an Environment Officer for the US Agency for International Development, was a Park Ranger on the Fire Island National Seashore, and served as a Peace Corps Conservation Officer in Swaziland (known today as Eswatini).

The United States has long been recognized as a pioneer of park development. Yellowstone became the world’s first national park in 1872, and the National Park Service (NPS) was established in 1916 to steward such national treasures. But the NPS also plays an important role in international conservation.

“The NPS has a fantastic mission, and it’s much more diverse than most people realize,” said Putnam, “It impacts so many parts of the country and society.”

Putnam serves as the U.S. program officer for the UNESCO World Heritage Convention, which identifies sites of global natural or cultural significance and promotes international cooperation in their conservation, and he oversees all NPS work in the Western Hemisphere. The scale of Putnam’s position is jaw-dropping, but he thrives on the opportunity to impact conservation projects around the world.

Putnam considers his crowning achievement to be the successful nomination of Hawaii’s Papahānaumokuākea Marine National Monument as a UNESCO World Heritage Site in 2010, making it the United States’ first large marine site and first mixed natural and cultural heritage site. Pronounced Pa-pa-hah-now-mo-koo-ah-keh-ah, the monument’s coral reefs provide a haven for more than 7,000 marine species, including the threatened green sea turtle and Hawaiian monk seal, and their protection is critical as we address the threat of climate change. In addition, islands located within the monument’s boundaries host several sites that are culturally significant for native Hawaiians.

The site’s value was further recognized when, in 2016, President Obama quadrupled the size of the monument to an area twice the size of Texas. It was Putnam’s work that helped bring international recognition to the site, ensuring the conservation of this global treasure.

Putnam also played a critical role in preserving Waterton-Glacier International Peace Park on the U.S.-Canada border when it became embroiled in a long-standing controversy over proposed energy development in British Columbia. Through his leadership of the UNESCO World Heritage Convention and cooperation with Canada, an agreement was reached that permanently protects the Flathead Valley in both British Columbia and Montana, preventing downstream harm to one of America’s beloved national parks.

In the following interview, Jon Putnam discussed what brought him to SEAS and what continues to drive his work—along with some good career advice for students.

What brought you to SEAS?

I'd been out of college for a couple of years and I was thinking about what I wanted to do next. I had started off with an environmental law firm as a paralegal, but I was beginning to figure out that the law wasn't where I wanted to be.

I had a housemate at the time who was also interested in the field of natural resources. He had a University Michigan (U-M) SEAS catalog that was literally lying on the living room coffee table. I looked through it, and I said, “Wow, this looks interesting.”

It's a little more complicated than that, but that’s essentially how I was first introduced to SEAS, and one thing led to the next. I ended up leaving that law firm job and working as a park ranger. My first job with the Park Service helped confirm that this was more like the area I wanted to work in. When I came back from that, I started looking around at grad schools and Michigan was my top choice.

You did some work in Puerto Rico last summer. Could you talk about that?

That was not directly part of my day job, but the National Park Service is part of the Department of the Interior (DOI), and DOI is the lead in federal emergencies. FEMA, of course, is the overall lead. But when a federal disaster is declared, the way it works now is that they have these interagency teams that help in the recovery. There are teams for housing and for transportation and for other parts of infrastructure. But there is also a team for natural and cultural resources, and DOI is the lead agency for that. So, our role in Puerto Rico is multifaceted, but the initial part was to go across the island and help determine exactly what the damage was to the island’s natural and cultural resources.

That meant going to everything from a community basketball court to a beach-front park to the 50,000-acre Commonwealth Forest and determining the damage to the infrastructure or trails, and then coming up with an estimate of what it would cost to fix and repair that damage.

Above and beyond that, the new thinking is instead of just replacing what existed prior to Hurricane Maria, let's consider how we can use this funding to actually make some of these areas more resilient to future storms—including more creative thinking, like how we can help restore coral reefs, and see them as a form of green—or blue—infrastructure to protect San Juan from storm surges in the future. It was fascinating, and I'm very glad I had the opportunity to be of whatever small help I could.

Is there one thing that you learned through your SEAS experience that you still use today?

To be honest I don't think there's one thing, it's more like there's many things that I would give SEAS a lot of credit for. Certainly, Steve Yaffe's course, the policy course that was very real world and very related to what we do here at the federal government on a day to day basis. I think that really helped prepare me for what I do now.

Working on a team while doing my master’s project was also very helpful because so much of the work we do here is through team projects. There is much more that I learned and still use, but those are really two things that stand out for me.

What is the one keystone that you feel would lead us toward a more sustainable future?

Boy, if I knew that… But really, I don't think there is one thing. It's going to be a suite of things that we need to do. We work a lot with the United Nations Educational Science and Cultural Organization (UNESCO). They're the Secretariat for the World Heritage Program which we help coordinate in the U.S. Their motto is: “Since wars begin in the minds of men and women, it is in the minds of men and women that the defenses of peace must be constructed.”

We understand that it's ultimately the human mind that is going to determine whether or not we have a peaceful world or one wracked by warfare. And I would say the same thing is true with the environment. Somehow, we need to get into people's minds and their ways of thinking, and really reshape the way we look at our relationship with the natural world, with the biosphere.

That's no small task. I'd be the first to admit that. But I think until we somehow figure out a way to, again, reshape the way we connect with the natural world, we're going to continue down this unsustainable path.

What drives you to do this work?

When I was younger, I think there were two things that really drove me the most.

One was a sense of adventure, and the other was the desire to do some kind of service. I feel very fortunate that my career has enabled me to have a little bit of both. Through my work as a Peace Corps volunteer, the U.S. Agency for International Development, and now the Park Service International Affairs program, I've been able to go all over the world and work with amazing people who have this shared mission of conservation, of parks, and protected areas.

Do you have any advice for current students?

I would suggest that students seriously consider looking at opportunities with the federal government, or with state and local government, or other ways of doing public service. Certainly, I'm most familiar with the federal government, and I can tell you that we need some youthful energy, some new ideas, the kind we could get from folks coming out of a place like SEAS. There are definitely challenges of being a public servant, I'll be the first to admit. But the rewards are significant as well. And we desperately need the help.

I would add that these times make the importance of SEAS students even more significant than in the past. We need more people trying to help where they can, not fewer. And I'm certainly glad to talk to any current student or recent grad who may be interested in the National Park Service or the federal government more broadly.