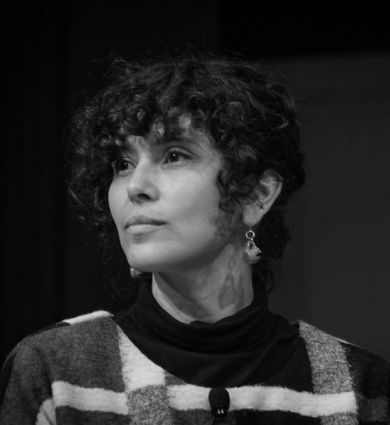 How can we be our best selves in the era of climate change, and what can be done to transform our society?"

Michelle Martinez (MS ’08) is a Latinx-Mestiza environmental justice (EJ) activist, writer, and mother, born in Detroit and raised by the Latino Diaspora. Since 2006, she has worked in local communities of color to build power to halt climate change, and the detrimental effects of pollution in post-industrial Detroit. Working across issues of race, gender, and nationality, she has built and led coalitions using art / media, land-based programming, popular education, voter engagement, and corporate accountability tactics to shape policy solutions.

Currently, Martinez is the Statewide Coordinator for Michigan Environmental Justice Coalition, which advocates for climate justice for communities disproportionately impacted by environmental toxins. She is also the Executive Director of Third Horizon Consulting Detroit—an effort to galvanize the skills, resources and networks working for environmental justice communities over the last decade.

“How can we be our best selves in the era of climate change, and what can be done to transform our society and save lives before it’s too late,” said Martinez, “Amplifying the message that another future is possible helps to inspire those already committed, and motivates people looking to get involved in the greater good.”

Martinez returned to her alma mater to moderate a national panel featuring EJ trailblazers Robert Bullard, Rhiana Gunn-Wright, Charles Lee, and Regina Strong. The panel was hosted by the Michigan Environmental Justice Summit 2020, an event commemorating the 30th Anniversary of “Michigan’s Conference on Race and the Environment.”

A few years before, in 2017, Martinez had approached SEAS Professor Paul Mohai with the idea for a study that would identify “hot spots” of environmental injustice across the state. Three SEAS students took on the challenge as their master’s project—with the goal to develop a Michigan-specific screening tool that would help identify the Michigan communities that are the most vulnerable and hardest hit by pollution. The following year, a second master’s project team built upon the work of their former classmates, resulting in “Environmental Justice Tools of the 21st Century.”

“A growing body of research proves that race and income are determining factors in the placement of toxic facilities,” said Martinez, “and on the broad scale of climate change, those impacted at a disproportionate rate will be the poor and disenfranchised people.”