Panel highlights legacy of original Teach-In on the Environment

Six former members of the U-M student organization that established the original Teach-In on the Environment in 1970 reconvened 50 years later March 11 to discuss how history can inform the environmental movement going forward.

While much of the discussion focused on how the original event coalesced — in terms of outreach, fundraising and bringing people together in a pre-social media era — panelists took time to discuss the legacy of that teach-in against the backdrop of the immense work to be done on environmental issues.

“We carried off the teach-in. We carried off many things in our lives since, but the big failure in society is still there and is going to be there for some time,” said Arthur Hanson, an ecologist and professor, and former president of the International Institute for Sustainable Development. “This is a long-term game.”

The original 1970 teach-in was organized by Environmental Action for Survival — known as ENACT — and formed a model for the first Earth Day five weeks later. The teach-in began with a “trial” and the sledgehammer “execution” of a 1959 Ford automobile, and culminated with a 50,000-person event at Crisler Arena.

The organizers’ reunion panel was livestreamed from the Samuel T. Dana Building. Besides Hanson, it included:

Alexander pointed to disinformation on social media, the hollowing out of local news, growing income inequality and an emerging rural-urban divide as key challenges going forward.

“I think there are new opportunities,” Alexander said. “Our young people need to come to grips with these issues in a way that, frankly, we had a lot of advantages given to us to adopt all of these reforms in the 1970s.”

The event was preceded by a teach-in where current youth and student activists compared strategies with activists from years past. 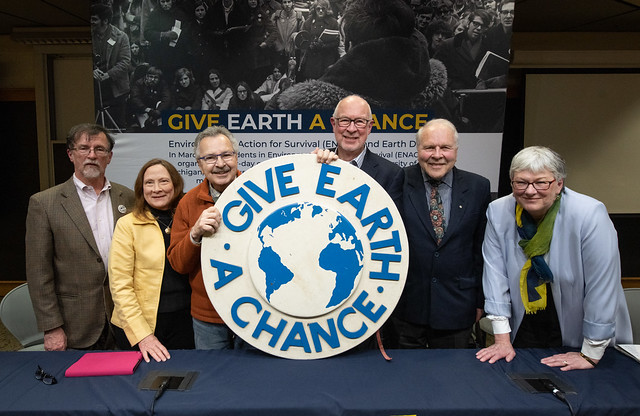 Panelists discussed how climate change and environmental justice are intertwined with various social justice issues. One takeaway: how current youth activists have added a necessary sense of emergency to the environmental discussion. One panelist noted that that urgency needs to be complemented by consensus on action.

The panels are part of U-M’s ongoing commemoration of Earth Day at 50, which notes the history of the environmental movement at U-M while elevating the need to address climate change through a community-driven, multidisciplinary effort.

While most Earth Day at 50 events have been canceled as part of the university’s response to the spreading threat of the COVID-19 coronavirus, organizers are looking to elevate prominent topics, events and speakers either through remote sessions or at later dates.