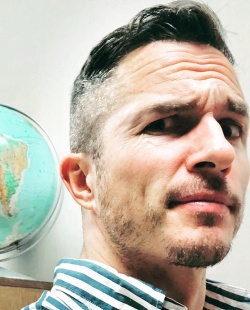 David Baylis is an historical and cultural geographer by training who chose to study geography because it afforded him the space to be eclectic, odd, interstitial, even tentacular in his academic and personal pursuits.

According to Baylis, it helped a "queer kid from rural Michigan discover a conceptual home for the tumult in his head."

Despite being somewhat mercurial when it comes to said academic interests, place/identity/story are almost always at the center of what David does and who he is. David has spent nearly a decade living in an odd collection of places, from rural Anatolia and Ankara to the Mississippi Delta, Little Rock, and Memphis. Each has added its accretions to his sense of self and story. Whether it's mapping neighborhoods and residents erased and displaced by urban renewal policies in Little Rock, restoring historically African American cemeteries in Memphis, or documenting the hybrid landscapes created by the rise and decline of catfish aquaculture in the Mississippi Delta, David is committed to the power of spatial storytelling as an empathic tool for effective coalition-building around issues and advocacy.