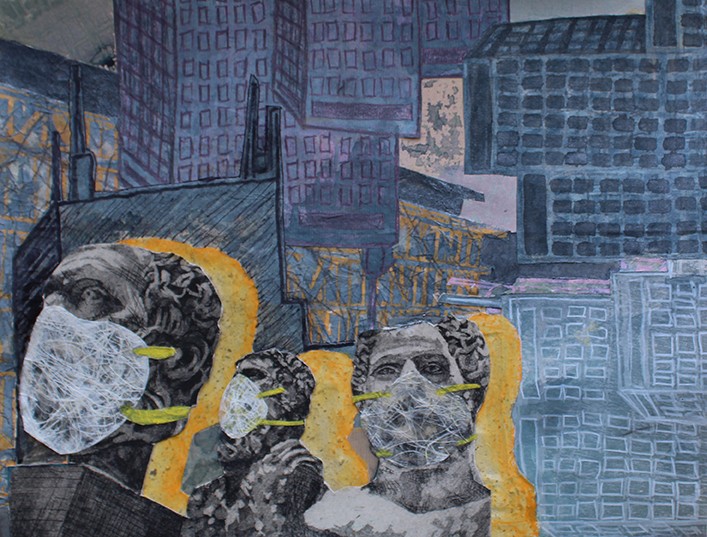 Current Exhibit: "The Remnants of Progress"

Erin Hoffman is a full-time tenured art instructor at Muskegon Community College. She received her BFA from the University of Northern Iowa and MFA from University of Georgia and both degrees are in printmaking. Erin recently completed artwork at two artist residencies, one in Skopelos, Greece at the Skopelos Foundation of the Arts and the other at Corvidae Press in Port Townsend, Washington. Her work mixes different printmaking techniques with painted and drawn components. She uses historical and politically themed imagery to examine contemporary aspects of American society.

"I feel that one experiences and draws conclusions about the world through the assembly of mismatched ideas and sensorial memories. Sometimes the associations of these ideas are seemingly random and other times there are lines that can be drawn between them that may lead to overarching truths or conclusions. Remnants are the remains of something. This ‘stuff’ carries along with it both the essence of what it once was and the potential for what it could become. When combined with other ‘stuff’ an entirely new thing is formed. In printmaking, in addition to the prints themselves you're left with the matrices you used to create the work. Although there is always the possibility for reprinting an edition, in most cases the remaining woodblock or litho plate never has another purpose. The creation process for the remnant series quite literally involves reusing and recontextualizing portions of work that I have made in the past."

The Art & Environment Gallery is sponsored by the University of Michigan School for Environment and Environment (SEAS) and is located in the Ford Commons on the first floor of the Dana Building. Exhibits rotate regularly and are presented in five showcases.The gallery opened in February 2012 to underscore the influence of art in shaping our understanding of science and nature. It features local and national artists whose work speaks to how people interact and understand the environment.

Sara Adlerstein Gonzalez, SEAS Associate Research Scientist, is the gallery organizer and curator. Read more about her in eCurrent Magazine.

For more information about past exhibits featured in the gallery, see the list below.