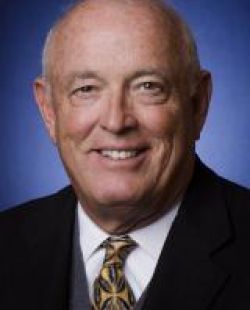 Mark Retzloff is a pioneer in the organic and natural foods industry with a 48-year career starting and managing successful companies. Currently the Chairman of Natural Habitat Group’s Board, Retzloff co-founded Alfalfa’s, a Boulder-based natural foods store, and Aurora Organic Dairy, whose board he currently serves on.

Retzloff started his career in natural foods retail as co-founder of Eden Foods, Rainbow Grocery, and the original Alfalfa’s Market, which merged with Wild Oats Markets in 1996. Retzloff went on to become one of the co-founders of Horizon Organic Dairy. There he served as Chairman, CEO and President International. He then became Chairman of Rudi’s Organic Bakery where he helped execute a successful turn-around.

He lends his knowledge as a board member and advisor to emerging companies which have included Blue Horizon Organic Seafood, Tempt Hemp Milk, Sambazon Acai, Evol Burritos, Boulder Ice Cream, BlueSun BioDiesel, Traditional Medicinals and Crocs Footwear. Retzloff is a founding partner at Greenmont Capital Partners, and serves as Chairman Emeritus of The Organic Center and he is a board member of RSF Social Finance. Retzloff sits on the University of Michigan’s School for Environment and Sustainability, Dean’s External Advisory Board and the Advisory Board for the University of Michigan’s Center for Sustainable Systems. He also serves on the Board of the Deming Center for Entrepreneurship and the Center for Education and Social Responsibility at University of Colorado’s LEEDS School of Business. He is also a member of CSU’s CASE, Center for Advancement of Sustainable Enterprise.

Retzloff received his BS in Environmental Studies from the University of Michigan and has received several awards, including the Organic Trade Association’s Organic Leadership award, the Boulder Chamber of Commerce's Lifetime Achievement Award and Entrepreneur of the Year award, Naturally Boulder’s Lifetime Achievement Award and was inducted into the Boulder County Business Hall of Fame.