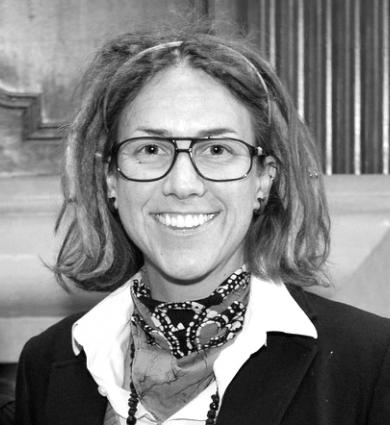 To me, Los Angeles and its river provide the perfect laboratory for exploring how to rebuild cities—humans’ new natural environment—into more inhabitable places.

Urban ecologist and landscape designer Kat Superfisky (BA ’07, MS/MLA ’13) is the founder and director of Grown in LA, which aims to transform the urban landscape by growing and supplying locally-propagated climate-appropriate plants to public green infrastructure projects (such as the Los Angeles River revitalization), while simultaneously engaging Angelenos through educational and vocational training opportunities. Prior to moving to Los Angeles, she planned, implemented, and oversaw ecosystem management efforts for 24,000 acres of parkland in metropolitan Detroit.

In addition to spearheading Grown in LA, Superfisky has been teaching undergraduate and graduate-level courses on ecology to landscape architects and architects at California State Polytechnic University-Pomona, University of California Los Angeles, and University of Southern California. She also serves on the Board of Directors for California ReLeaf and is a science advisor for the City of L.A. Biodiversity Index, as well as for The Nature Conservancy. Superfisky is currently contributing science-based technical expertise to the City of L.A.'s Wildlife Pilot Study, an effort spearheaded by the Department of City Planning that is identifying ecologically significant areas within LA, and developing regulations that will preserve and enhance habitat and connectivity in the city.

PLANTING SEEDS, EMPOWERING PEOPLE, AND TRANSFORMING A RIVER
When she left Ann Arbor in 2013, diplomas in hand, Superfisky moved 2,300 miles across the United States to Los Angeles – for a river. (Yes, Los Angeles has a river.)

“To me, Los Angeles and its river provide the perfect laboratory for exploring how to rebuild cities – humans’ new natural environment – into more inhabitable places,” said Superfisky.

Most Angelenos don’t recognize the L.A. River as a natural one, mostly because it visually resembles a highway. A once free-flowing arroyo, the U.S. Army Corps of Engineers channelized it with concrete in the mid-20th century to accommodate development expansion, provide safety assurance from flooding, and manage sewage-treatment discharge. Public access was prohibited, and it was bound with barbed wire, walls, and fences—transforming it from a beloved resource to one that has essentially become invisible.

For ecologists like Superfisky and many others working to revitalize the river, it has the potential to bring life to the city. But they need plants. Millions of plants. And herein lies the issue: locally, native plants are scarce. Landscape professionals and retail nurseries often truck in plants from as far away as Oregon when they’re needed for projects in L.A., a practice that increases transportation costs and emissions, outsources jobs, and decreases the plants’ survival rate.

Since 2014, Grown in L.A. has been pulling together a diverse and plentiful array of government entities, nonprofits, private organizations, and academic institutions to find ways to meet Los Angeles' urgent need for native plants.

The nonprofit is creating a network of nurseries on underutilized land in the region to grow the plants needed for upcoming river restoration projects. These nurseries will not only grow plants, but will also grow people – by engaging Angelenos in urban conservation efforts via educational and vocational training opportunities.

Superfisky said, “Through my work, I hope to further the budding field of urban ecology, and help humans rewrite the stories we tell about ourselves and the impact we have on the environment around us into positive ones.”

Superfisky’s Advice for Current Students: Design is not the parsley on the pig, but rather an essential component in conserving, preserving, restoring, and enhancing the environment. Appearance matters, and it has the power to make people value and protect the world around them. Use it to your advantage.