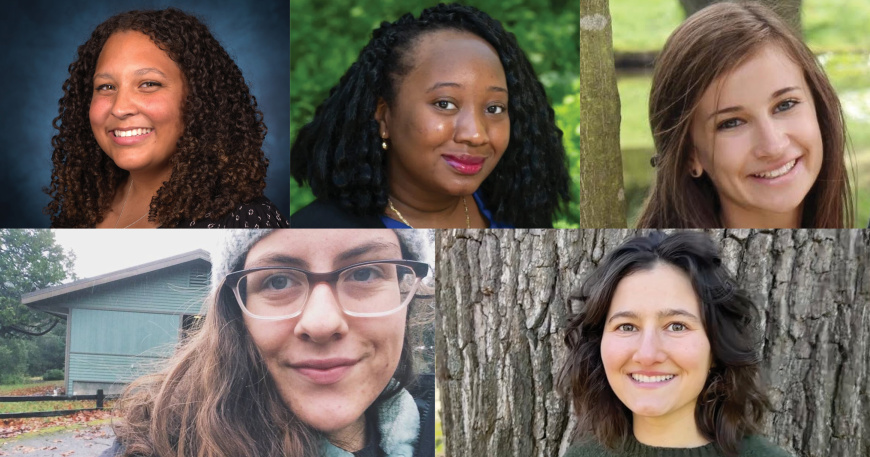 What began as a University of Michigan School for Environment and Sustainability (SEAS) master’s project for the Vermont Natural Resource Conservation Districts (NRCD) led to an invitation to continue their work post-graduation—and ultimately to the launch of New Leaf DEI Consulting, a collective that specializes in supporting organizations in the environmental field as they determine and actualize their Diversity, Equity, and Inclusion (DEI) goals.

“We saw how well our approach worked for the districts,” said Dupre, “and I think it would have been really hard for the districts to coordinate this internally—because they've got so many moving pieces. An outside group of people who can create something based on unbiased analyses can be very useful for organizations.”

“Being SEAS students from the Environmental Justice (EJ) specialization, we are well-positioned to provide help to natural resource management organizations,” said Cone. “We've had some discussion about other districts in the Northeast region that might benefit from our service. And of course, there are conservation districts all over the country—so potentially we could expand further.”

The capstone project that brought the team together was initiated in February 2021—when a group of NRCDs and Vermont Association of Conservation Districts (VACD) staff sought out SEAS students to conduct research to support their efforts in building DEI at their districts, and to learn how to better serve diverse populations.

The project’s focus held a strong appeal for the five EJ students.

“I came into graduate school with the thought of putting more work into making environmental spaces more critically aware of where they fail in integrating EJ issues,” said Dickson. “I've spent so much time in the technical field, and I looked forward to actually working with people.”

Although every master’s project team encounters challenges, there were a few unexpected hurdles that the team faced at the onset.

“When we started this project, we understood that we would be doing this for one of the districts working on DEI that needed some assistance,” said Dupre. “But when we dove into it, we discovered that the project involved ALL of the districts in the state.”

Williams and Rohrer spoke of a few other stumbling blocks.

“In the initial proposal, there was a lot of uncertainty about what the districts wanted and what the final product would be for them,” said Williams. “I think too, that in some spaces there's a lot of fear around making their own decisions. That's something that we grappled with in this project.”

“Going into it, none of us really knew what a conservation district did formally,” Rohrer related. “And all of the districts focus on different things, work at different scales, and represent very different communities—from urban, suburban, to rural and farming. That’s why I'm really proud of all five of us. We were able to bridge those different gaps, and create a product that incorporated all of those differences in their work to unify them. And we also ended up with a powerful methodology that we're really proud of.”

Dupre admits that the team encountered some pushback from participants along the way.

“I think people kind of felt like, ‘Oh, these DEI trainers, they don't know us. Who are they? What are they trying to get us to do?’

“But later on, when they saw what we developed, they said, ‘This feels really personalized, really accessible, and something that's perfect for us—exactly what we needed,’” said Dupre.

She credits that shift in the participants’ experience, in large part, to the team’s ability to listen.

“I came to this project thinking, ‘Oh, we can do this and we can do that for the districts,” said Dupre. “And then I had to take a step back and realize, ‘Oh, we need to listen and really focus on what they’re saying. We need to learn more from them so that we can mold this to fit what they need to do—and not what we think they need to do.”

To assess attitudes, beliefs, and visions for the future of DEI at the NRCDs, the team employed the Delphi model–an iterative process in which a small, committed group of interviewees helps create a well-calibrated survey for their community. After multiple interview and feedback sessions, the team analyzed participant input for consensus on the development of a ﬁnal survey—which was sent to all staﬀ and board members from all 14 conservation districts. The final survey had an impressive 77% response rate.

The team then developed a self-assessment tool, along with a companion piece, the Growth Guide—a document intended to make all aspects of the self-assessment tool clear and accessible, while providing resources and general recommendations to steer districts forward in their DEI implementation work. The Guide is organized by practices intended for “Inward-Facing Community” and “Outward-Facing Community.” The sections address topics such as organizational culture and safe-space practice, hiring and recruitment, collaboration practices, and relationships with Indigenous Peoples.

At the project’s conclusion, the team presented their work to the district managers statewide.

“We really wanted to make sure that the Self-Assessment Tool and Growth Guide were going to be implemented,” said Dupre. “So, we wanted to field any questions and ensure that the rollout would be accessible and meaningful for everyone—and that they could feel like they had investment in it, too.”

The team expressed their appreciation for the guidance they received from the project’s faculty advisor, Kyle Whyte, the George Willis Pack Professor.

“Dr. Whyte was with us every step of the way, and he modeled what it means to be an advisor,” said Cone. “He very skillfully guided us to see that the personalized approach of the Delphi survey helped the participants to understand what they wanted, and to understand the process. We needed to—as (activist and writer) Adrienne Maree Brown has said—‘move at the speed of trust.’”

Several months after the team members graduated, the Vermont NRCD invited them to directly implement the plan they made, and to engage in further work. In October, the team held two training sessions for NRCD and VACD staff from all of the statewide districts to initiate the implementation process. Each district was also asked to nominate at least one member of their staff or board to serve on a DEI Committee.

Dupre emphasized that the districts’ work to incorporate DEI will be an ongoing process.

“The DEI Committee has volunteered to be responsible for ensuring that this process happens every year,” said Dupre. “Both the self-assessment tool and Growth Guide are intended to be ‘living documents,’ and should grow with the NRCDs as they find new strategies to meet their goals.”

Cone related that the team is greatly encouraged by the response to their work.

“It was really amazing to see how many people wanted to engage and be involved,” said Cone. “And we really did see that level of engagement all the way through—in what turned out to be a two-year process. It was also pretty incredible to have that many people—from 11 out of 14 districts—show up for the last multiple hours-long Zoom training sessions. It was a big commitment to make.”

Over the months to come, the five SEAS alumni will be working through business details of their new venture, New Leaf DEI Consulting. Though they now hold positions in the environmental fields in multiple states—with the exception of Rohrer, who has taken time to enjoy her New England home before beginning her job search—they look forward to offering their consulting services through online platforms.

“I learned so much about working as a team through this experience,” said Cone, “and I learned something different from every member. We all have really unique skill sets, and we’ll be bringing those to our future work with New Leaf.”

In addition to their work with New Leaf DEI Consulting, the SEAS alumnae share the following job updates: