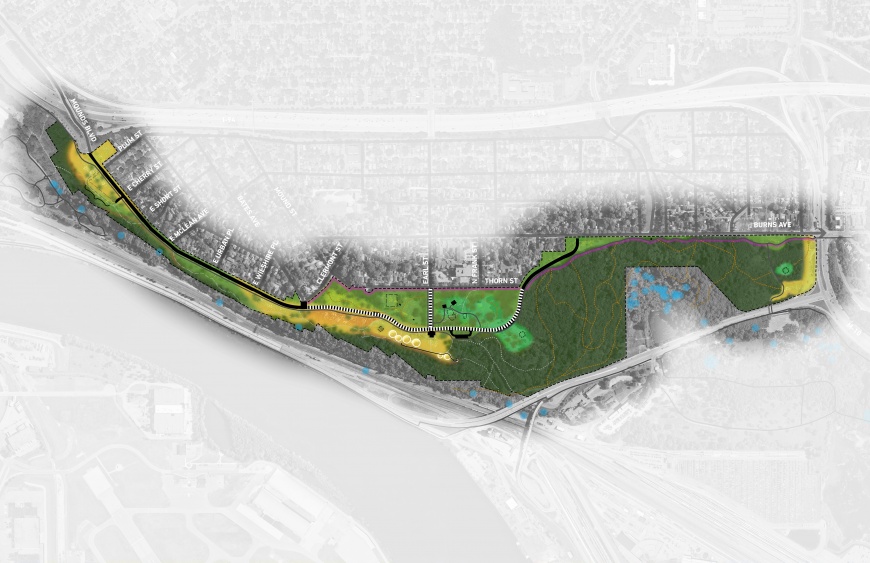 Combining her love of historical research and landscape design with well-honed creative and analytical skills, Stephanie Redding, ASLA (BS ’10, MLA ’13) found her niche at Quinn Evans—a national firm that supplies services in architecture, master planning, interior design and historic preservation, including sustainable design and stewardship. She credits her advisor, Robert (Bob) Grese—well known for his work in historic landscape preservation and now a professor emeritus at the U-M School for Environment and Sustainability (SEAS)—for encouraging her to explore opportunities at the firm’s Ann Arbor office. At the time, Redding was completing her degree in the Master of Landscape Architecture program at SEAS.

Grese recognized that Redding was a natural fit for a career specializing in “cultural landscapes”—an approach that considers the human interaction with the natural environment throughout time, often marked by historic events or cultural heritage. Having earned her undergraduate degree in architecture at U-M, she had also worked at the university’s Bentley Historical Library for seven years.

Redding explained that Quinn Evan’s approach to the study of cultural landscapes typically follows the U.S. Secretary of the Interior’s Standards for the Treatment of Historic Properties.

Their specialized team—of which Redding is a part—often employs geographic information system (GIS) tools and other mapping techniques to analyze the geological and environmental history of how the landscape was formed. They also consider elements that impact usage during key time periods, such as whether soil quality was suitable for farming and the kinds of building materials and water sources that were available—as well as the current condition of the land. Historic events or traditional land uses further inform the team of the cultural significance of the area.

“This kind of in-depth documentation and analysis leads us to consider what is most important to protect, what is important to the landscape’s history but is now missing, and what could be enhanced so that people will understand the value of the landscape,” said Redding. “We try to bring all those threads through to the present—and look at the ways in which the land may be shaped in the future, with careful attention to resilience and sustainability.”

But Redding emphasizes that shaping that future is an intensely collaborative process.

“We’re here as a kind of conduit to help people figure out what should happen to protect these places. It’s critical for us to build teams that include people who are most connected to these environments—and the history that happened there.”

A compelling example of this approach is found in a recent project that Quinn Evans completed: “Indian Mounds Cultural Landscape Study and Messaging Plan.” In 2021, the project earned national recognition from the American Society of Landscape Architects (ASLA)—receiving the Honor Award in the Analysis and Planning category.

The land now called Indian Mounds Regional Park was established as a public park by the City of Saint Paul in 1892. But this place—situated on a bluff overlooking the Mississippi River—has been a sacred burial ground for over 1,000 years, and holds deep meaning for Indigenous peoples* as a place of reverence and respect for their ancestors.

“The biggest learning moment in this process for us was understanding that this land is a cemetery,” said Redding. “There’s a real need to recognize that places like this are living landscapes. They’re important not just for what happened in the past, but for their significance to living cultures.”

Quinn Evans, along with collaborating landscape architects Ten x Ten and Allies Inc., tribal representatives of Dakota communities in Minnesota, and the City of St. Paul Parks and Recreation Department crafted a plan to reclaim the site as a sacred place.

After conducting a comprehensive site analysis and assessment of its historic significance, the major challenge for Quinn Evans was to reframe the community’s perception of the site from one of “recreation to reverence.”

“We had a lot of important conversations with members of Indigenous communities and people from the surrounding neighborhoods who came together to find a respectful way to move forward,” said Redding. “This isn’t a ‘big splashy design project.’ It’s more about taking a light touch to nudge the landscape in the direction that will protect it in the future.”

Before the long-term recommendations for the land’s restoration take place, Redding noted a few of the first steps.

“Our partners are implementing immediate messaging—primarily in the form of signage—to help people understand that this place is a cemetery that deserves respectful behavior, as well as the cultural legacy that explains why these changes are taking place,” said Redding.

Another change begins in the landscape itself.

“Landscape treatment is proposed to begin with a band of native plants and other signaling features that will expand over time into the landscape,” said Redding. “This will bring back plants that have importance not just to the ecosystem, but also as healing and protective plants identified by the people whose ancestors are buried there.”

Redding noted that the use of landscape elements to signal an alignment with cultural values is an approach that carries through from her master’s project at SEAS when she studied with Landscape Architecture Professor Joan Nassauer, FASLA. Nassauer first introduced the concept of “Cues to Care” (CTC) in 1995. Among the messages that CTC communicates are “caring human intentions and a consistency with local cultural traditions.”

Entering the site through a threshold of native plants should achieve that goal, noted Redding, by inviting a deeper connection to the nature that once flourished there—and does so again.

As the 20-year vision for the site unfolds, the reclamation will include the removal of pavement and contemporary additions, along with the reestablishment of water systems and habitats. The team also is considering how the site connects to the landscape beyond its borders, though Redding stressed that the concept of “borders” is not in keeping with Dakota perspectives.

“This site is not something that you can put a clean edge on,” said Redding. “It’s a part of a whole place and a worldview that sees that everything is connected. That’s an important concept for this place.”

*The landscape of Indian Mounds is a sacred place of burial. It is a cemetery built by ancestors of living people. The place has deep significance to the Upper Sioux Community, Lower Sioux Community, Shakopee Mdewakanton Sioux Community, Prairie Island Indian Community, Ho-Chunk Nation of Wisconsin, Iowa Tribe of Kansas and Nebraska, Sisseton-Wahpeton Oyate and other descendants of those who are buried here. It is home to the only known remaining burial mounds within the Minneapolis-Saint Paul urban core.