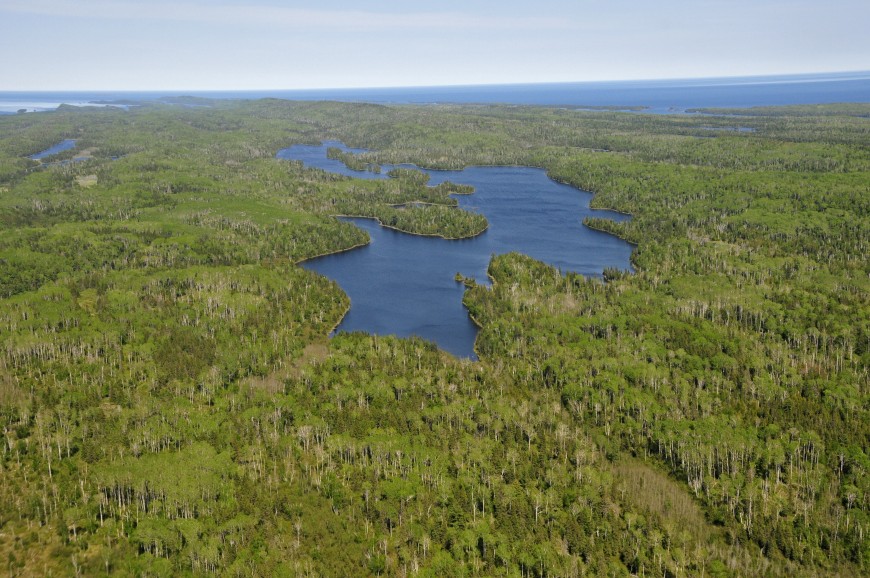 Isle Royale National Park is an archipelago located along the northwest coast of Lake Superior. The series of islands make up the least-visited national park within the lower 48 states because of their remote locations, accessible from the Michigan coast via a six-hour ferry ride. Island ecosystems in general are very sensitive to the impacts of climate change because of isolated organisms and specialized food web interactions. Isle Royale is unique because of its uninhabited status—the island is 99 percent wilderness—historic national protection, and its location at the boundary between boreal and temperate biomes. The animal populations on the island include timber wolves, beavers, and the last surviving species of North American megafauna, the moose.

The National Park Service (NPS) manages the island and introduced more wolves to the Isle after the timber wolf population dropped from an average of 25 to 2 in 2016. The moose population, which the wolves mainly prey upon, tends to be around 700 to 1,200 animals, but has increased to 1,600 in the past few years because of the decline in wolves. This increase in the moose population has put unsustainable strain on the trees that both they and beavers consume, specifically aspen, birch, and red maple saplings. Beavers on Isle Royale also consume balsam fir and other trees and use them to construct dams, which promote a diverse aquatic habitat.

SEAS students have been completing master’s projects with Isle Royale’s NPS staff since 2018. The current group of master’s students will expand this work to analyze the competitive relationship between moose-beaver herbivory, in an effort to “understand the impacts of restoring predation to Isle Royale,” said Lynette Potvin (BS ’04), an ecologist at Isle Royale. “The introduced wolf population will alter the foraging behaviors of the moose and beaver. We want to develop a way to assess how this foraging change impacts the successional trends of the island’s vegetation.”

The student project team will collect and analyze transect data used to measure the herbivory rates of the beaver and moose populations. “We will directly integrate their moose herbivory data with more recent beaver data to effectively characterize any dietary overlap and its possible effects on forest succession,” said master’s student Theresa Dowker.

The larger scope of this project is particularly important because of Isle Royale’s island ecosystem. This allows researchers to control for unseen factors, allowing them to draw conclusions that can be applied to other ecological settings. Isle Royale “is extremely unique because of its location at a biome transition on federally protected land,” said master’s student Luke Skowronek. “The sustainability and success of these animal populations and the health of the ecosystem of this national park is extremely important.”

Students have been preparing for the project by reviewing statistical analysis techniques, the history of Isle Royale, and foraging tendencies, dietary preferences of moose and beaver, and the forest’s vulnerability to disturbances like insect outbreaks and climate change. This work will create the foundation for data collection, organization, and analysis that will take place in May and September 2021 by NPS staff and SEAS students, if Covid restrictions allow.

“I’m excited to analyze the data we collect since materials in our literature review have come to different conclusions about the herbivory relationship between moose and beaver populations,” said master’s student Krysta December. “I’m hoping this study will help us further understand what resources are available on the island, not just limited by changing temperatures, but also by changing soil conditions.”

The team would like to see its research utilized to implement a sustainable management plan to balance the needs of moose and beaver populations within the island ecosystem, which will contribute to the important legacy of scientific studies implemented at Isle Royale.