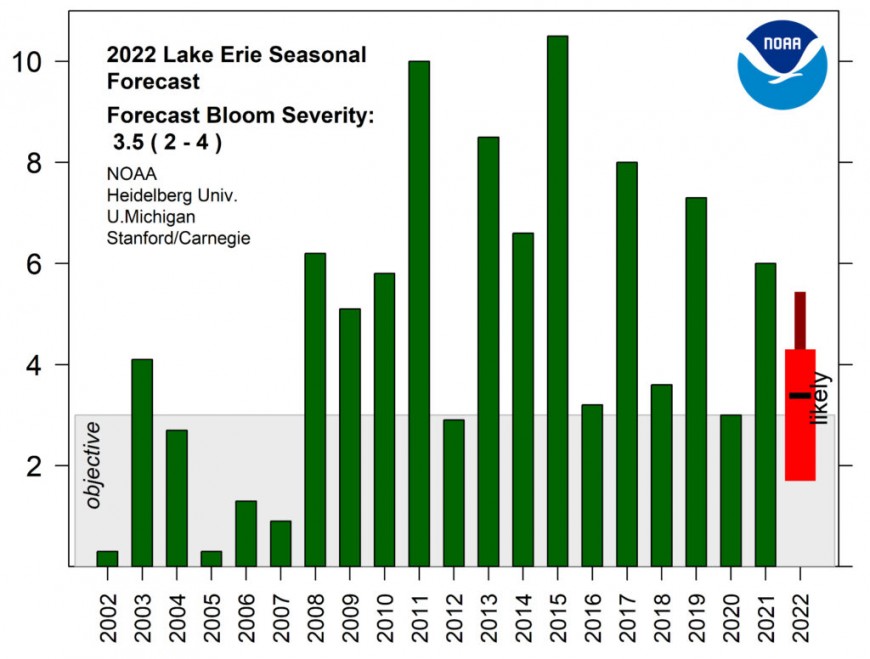 University of Michigan researchers and their partners are forecasting that western Lake Erie will experience a smaller than average harmful algal bloom this summer, which would make it less severe than 2021 and more akin to what was seen in the lake in 2020.

This year’s bloom is expected to measure 3.5, with a potential range of 2-4 on the severity index—whereas last year’s bloom was measured at a 6, according to the annual forecast released today by the National Oceanic and Atmospheric Administration, which funds the research.

“While this year’s forecast is similar to the long-term average, the long-term average is not the goal. We cannot just cross our fingers and hope that drier weather will keep us safe,” said University of Michigan aquatic ecologist Don Scavia, professor emeritus at the School for Environment and Sustainability and a member of the forecast team.

“These blooms are driven by diffuse phosphorus sources from the agriculturally dominated Maumee River watershed. It is promising that Ohio and the Environmental Protection Agency have finally committed to a nutrient-reduction program similar to those that have worked in other watersheds.

“But persistent and aggressive action to control diffuse phosphorus sources within that framework will be required to meet the goals of the Great Lakes Water Quality Agreement.”

Lake Erie blooms consisting of cyanobacteria, or blue-green algae, are capable of producing microcystin, a known liver toxin that poses a risk to human and wildlife health. Such blooms may force cities and local governments to treat drinking water, close beaches and can harm vital local economies by preventing people from fishing, swimming, boating and visiting the shoreline.

“Toxic algae affect not only the health of people and marine ecosystems, but also the health and vibrancy of local and regional economies,” said Nicole LeBoeuf, assistant administrator for NOAA’s National Ocean Service. “Like with the weather, environmental forecasts are an important tool that can empower communities to more effectively prepare for these events and are a huge part of NOAA’s service to the nation.”

The size of a bloom isn’t necessarily an indication of how toxic it is. For example, the toxins in a large bloom may not be as concentrated as in a smaller bloom. Each algal bloom is unique in terms of size, toxicity and ultimately its impact on local communities.

“With 10 years of experience with forecasts we understand more about the blooms, including evidence that big river discharge events in mid-summer may matter more than we thought,” said Richard Stumpf, NOAA’s National Centers for Coastal Ocean Science’s lead scientist for the seasonal Lake Erie bloom forecast. “They create more uncertainty, but our models are improving as a result. We will also have to watch to see if these events become more common in the future.”

NCCOS’s Lake Erie Harmful Algal Bloom Forecast website provides predictions and visualizations of the bloom’s location and movement on the lake’s surface, as well as where the bloom is located within the water column. This information is especially helpful to water treatment plant operators, because intake structures are usually located below the surface, so the risk of toxins in their source water may be greater when these cells sink.

Researchers expect a start of the visible bloom in mid-to-late-July. The duration of the bloom depends on the frequency of wind events in September, which cannot be predicted this far in advance. The bloom will remain mostly in areas of the Western basin.

The Central and Eastern basins of Lake Erie are usually unaffected, although localized blooms may occur around some of the rivers after summer rainstorms. July is expected to have average rainfall, but there is still large uncertainty. Larger rain events could result in increased river flow and a higher severity index.

NOAA will issue a seasonal forecast update in late July based on observed rainfall in the basin. Recent research has found that a long-term increase in the frequency of heavy rainfall events due to climate change may be causing more runoff during spring and summer months because the soil has less time to absorb the rain.

Combined with the increase in bioavailable phosphorus concentration in the early 2000s (as a result of changes in agricultural practices), this rainfall trend may explain the higher-than-average phosphorus loads each spring over the last 14 years.

In addition to the early season projections from NOAA and its partners, NOAA also issues harmful algal bloom forecasts during the bloom season. These forecasts provide the current extent and five-day outlooks of where the bloom will travel and what concentrations are likely to be seen, allowing local decision-makers to make informed management decisions.

Nutrient load data for the forecasts came from Heidelberg University in Ohio, and the various forecast models are run by NCCOS, the University of Michigan, North Carolina State University, LimnoTech, Stanford University and the Carnegie Institution for Science.

Field observations used for monitoring and modeling are done in partnership with a number of NOAA services, including its Ohio River Forecast Center, NCCOS, Center for Operational Oceanographic Products and Services, and its Great Lakes Environmental Research Laboratory, as well as the University of Michigan-based Cooperative Institute for Great Lakes Research, Ohio Sea Grant, Ohio State University’s Stone Laboratory, the University of Toledo and Ohio EPA.

Nutrient reductions are accomplished under the Total Maximum Daily Load section of the federal Clean Water Act, which identifies the maximum amount of a pollutant that a body of water can receive while meeting water quality standards  and develops a plan to achieve those goals.

“While Lake Erie’s TMDL has yet to be formalized, it will hopefully provide a framework for aggressively addressing all phosphorus sources,” said U-M’s Scavia.

Read the release on Michigan News