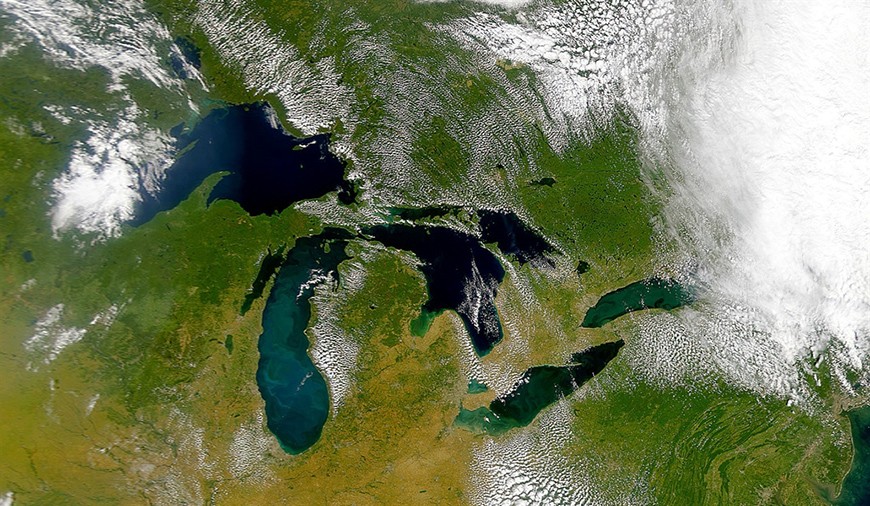 Climate change is causing significant impacts on the Great Lakes and the surrounding region. As the largest surface freshwater system in the world, the Great Lakes have an enormous impact, seen and unseen, on the more than 34 million people who live within their collective basin. Because of their unique response to environmental conditions, Earth’s large lakes are considered by scientists as key sentinels of climate change.

A long-term study published in Nature Communications today from NOAA reveals a warming trend in deepwater temperatures that foreshadows profound ecological change on the horizon. While less visible than the loss in ice cover and increasing lake surface temperatures, this latest index of climate change adds to the growing evidence of climate change impacts in the region.

Using a 30-year dataset of deep water temperature measurements, NOAA Great Lakes Environmental Research Laboratory scientists investigated how Lake Michigan’s seasonal mixing patterns are being influenced by climate change. As it turns out, what’s happening on the lake’s surface during the summer is actually impacting the lake’s deep waters during the winter.

“We found that this long-term data set not only confirms that Lake Michigan’s deep waters are warming, but also shows that winter is vanishing from them,” said NOAA GLERL’s Eric Anderson, the study’s lead author. As climate change has gradually delayed the onset of cooler autumn weather over the past three decades, the deep waters of Lake Michigan have reflected this change by showing shorter winter seasons.

This key finding may indicate some dramatic changes in the foreseeable future, as an increase in a lake’s overall water temperature can lead to permanent changes in the water’s seasonal mixing patterns. This could eventually alter Lake Michigan’s rate of primary productivity, which would inevitably disrupt the structure of its entire food web -- a change that could have negative impacts on fisheries and recreation. “Without high-frequency long-term monitoring of subsurface waters of the world’s deep lakes,” said Anderson, “we will be blind to the impacts of climate change on most of Earth’s fresh surface water.”

Importance of monitoring below the surface

Our ability to collect lake surface data with satellites, buoys, and water samples has come a long way over the past few decades in helping scientists understand how large lakes throughout the world respond to climate change. But since many of them -- including the Great Lakes -- are several hundred feet deep, those surface measurements don’t tell the whole story of what’s going on beyond the sight of satellites. Deep-water measurements at high temporal frequency are much more rare, especially on the time scale of years or decades.

In the new research, NOAA GLERL analyzes a 30-year, subsurface temperature dataset in order to observe what Lake Michigan’s deep waters are telling us about Earth’s changing climate. The scientists used a long string of high-tech thermometers called a thermistor string, which floats vertically in the water and records temperatures at different depths in the lake. This instrument has been recording water temperatures every hour almost continuously for the past three decades. Lake Michigan is likely the world’s only large lake with this type of long-term observations of water temperatures at depth.

This groundbreaking research examines the lake’s year-round temperature changes throughout the water column, rather than just lake surface temperatures in the summer. “For small, shallow lakes, summer surface temperatures are a reasonable representation of what’s happening to those lakes as a whole,” said Anderson, “but for our largest lakes like Lake Michigan, that’s not always the case.”

Subsurface waters in deep lakes can provide an important signal because they integrate conditions across years, providing a “climate memory,” and can help identify the potential for ecological and physical changes throughout the lake.

"One of the most important results of this study is an improved understanding of changes in the subsurface heat content of the Great Lakes,” said study co-author Andrew Gronewold of the University of Michigan School for Environment and Sustainability. Interestingly, scientists have also been looking at changes in the heat content of oceans to better understand impacts of climate change. This study represents a logical and exciting approach to viewing Earth's largest fresh surface waters from a similar perspective,"

An Important Piece of the Climate Change Puzzle

The deep-water conditions of the Earth’s largest lakes are considered a missing piece of the global climate change puzzle. NOAA’s work on Lake Michigan will pave the way for gaining a better understanding of this puzzle piece in the future. For the millions of people who rely on the freshwater lakes for drinking water, fisheries and more, studying the changes that large lakes are experiencing is essential to maintaining our resilient ecosystems, communities, and economies.

Read the story on research.noaa.gov