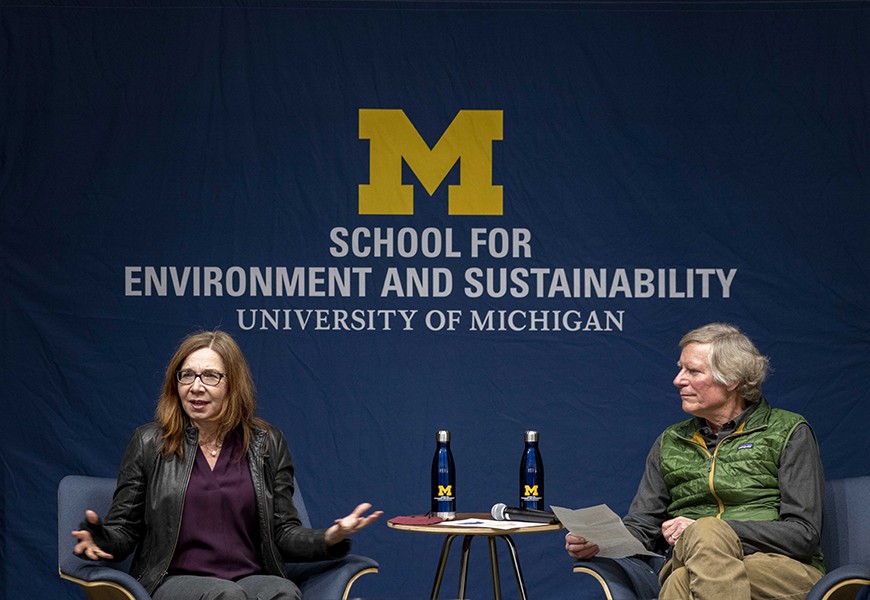 The SEAS community welcomed renowned climate scientist Katharine Hayhoe to campus on Friday, March 4. Hayhoe, who is an atmospheric scientist and professor of political science at Texas Tech University, where she is director of the Climate Science Center, sat down with Dean Jonathan Overpeck for a conversation about climate change, the challenges we face, the plausible actions and solutions, and the hope she holds for our future.

Hayhoe, who in 2021 joined the Nature Conservancy as Chief Scientist and recently published the book “Saving Us: A Climate Scientist's Case for Hope and Healing in a Divided World,” maintains an optimistic view on climate change action and progress. During the conversation, she outlined the issues at hand and why she believes that collective action is the way to solve them. Hayhoe said, “We need to stop putting carbon into the atmosphere. We need to take it out of the atmosphere, and we need to learn how to adapt to the changes that are already occurring. Those are the three things we have to do.” She continued by explaining that we cannot change a system without individuals taking action, stating that, “...the only way a system has ever changed is when individuals were the catalyst for the change.”

She reflected on collective action of the past, such as the Civil Rights movement, and explained that, “It didn't take months, it didn't take years, it took them decades, but they changed the world. And that's the way we can do it again. We've already been doing this for decades, so it's time to get there. And how we're going to get there is, I think, when everybody uses their voice, wherever they are.”

Hayhoe went on to explain that 70% of the U.S. population is worried about climate change, and that 83% of young people are worried about it, but that only 8% are “activated” and making an attempt to do something about it. She said that this is because people do not know what to do, so she tries to convey that using one’s voice is the most powerful way to make change. Hayhoe said that it’s important to keep in mind that 99.5% of elected officials are local, not federal, which makes it a lot easier to have conversations with them and to enact local changes more quickly than we can as a country.

While discussing the political divide that exists on the topic of climate change, Hayhoe explained, “Back in the 1990s, Democrats and Republicans had the same opinions about climate change. Science denial is only about 20 years old. And how old is climate science? One hundred fifty years old or more. So we make the mistake of thinking that they just don’t know the science. That’s not what’s feeding the objections. What’s feeding the objections is solution aversion. People don’t think there's anything we can do to fix it.”

Hayhoe explained that she spends a lot of time helping people understand that hope is everywhere, emphasizing that people tend to act when they feel hopeful. “Hope is all around us. That giant boulder is up at the top of the hill, rolling down the hill in the right direction. I've got my hand on the boulder pushing, and I look around, and there are 20 people beside me here and there are 30 people beside me here. And I look around the corner, there are another 100 people there. And all of a sudden, hope is everywhere. And that is so important—to realize that we're not alone, that action is already happening, and that when we act, that is where we find hope.”

View the full conversation below.