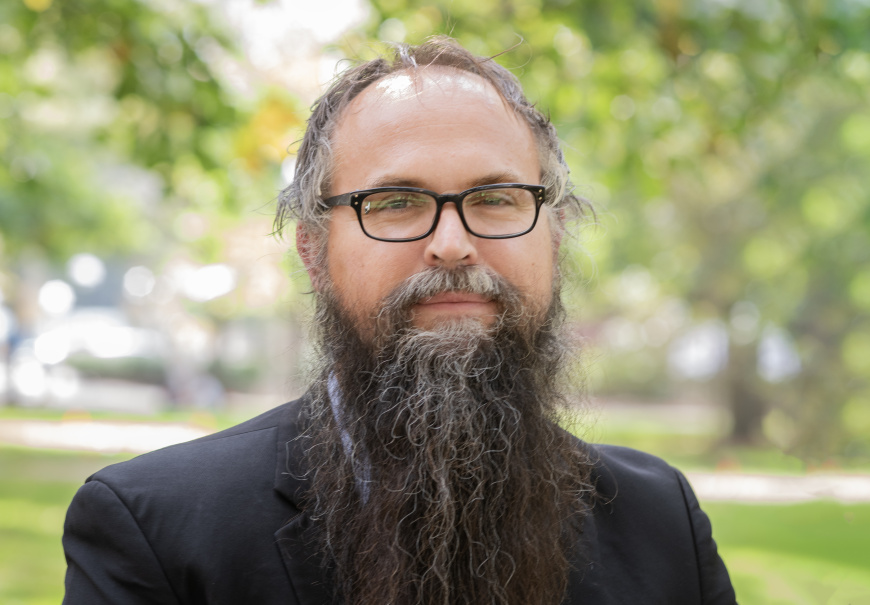 University of Michigan environmental justice expert Kyle Whyte is one of seven distinguished scientists in the country named U.S. Science Envoys by the Department of State.

Through the Science Envoy Program, eminent U.S. scientists and engineers travel to foreign countries as private citizens, leveraging their expertise and networks to forge connections and identify opportunities for sustained international cooperation.

Whyte, the George Willis Pack Professor at the U-M School for Environment and Sustainability, is the first U-M faculty member to receive the honor, according to the State Department.

“I’m inspired by what all my colleagues are doing at SEAS—there’s really no place like it—and I’m thrilled to carry over that inspiration to my endeavors as the first U.S. Science Envoy hailing from our campus,” said Whyte, an enrolled member of the Citizen Potawatomi Nation whose research focuses on Indigenous peoples’ rights and knowledge in climate change and conservation planning, education and policy.

“My selection signals to me that the U.S. is serious about making major transformative changes that uplift Indigenous peoples’ leadership and success in the important scientific fields that address sustainability, climate change, food and agriculture, and biodiversity.

“It’s a rare opportunity, and I will work extremely hard to honor the generations of Indigenous scientists and allied scientists who have fought for scholarly diversity, inclusion, and justice in academia.”

At SEAS, Whyte teaches in the environmental justice specialization. He is founding faculty director of the Tishman Center for Social Justice and the Environment, and principal investigator of the Energy Equity Project.

Whyte serves on the White House Environmental Justice Advisory Council and is the Chapter Lead Author of the Tribes and Indigenous Peoples chapter in the upcoming U.S. National Climate Assessment.

“Professor Whyte is an exceptional interdisciplinary scholar dedicated to making a real difference to society, and in particular to communities and people who need to be heard and at the table when it comes to climate change and other environmental challenges of our time,” said Jonathan Overpeck, the Samuel A. Graham Dean of the School for Environment and Sustainability.

“It is important that both the University of Michigan and the U.S. Department of State share this commitment both at home in Michigan and around the planet—our future depends on it.”

Since 2010, U.S. Science Envoys have made more than 60 trips to dozens of countries across Africa, the Middle East, Central Asia, South America and Southeast Asia and have engaged with a multitude of government officials, including heads of state.

Like their 23 predecessors, the new U.S. Science Envoys are approved by the U.S. Secretary of State and will engage internationally at the citizen and government levels to enhance relationships between other nations and the United States, to develop partnerships and to improve collaboration.

At a kick-off meeting in Washington, D.C., at the end of January, the new envoys will solidify plans for their personal projects and travels.

“My hope is that some of my areas of focus will come into play, including my work advancing the status of Indigenous peoples’ knowledge in scientific assessments, supporting the growth of Indigenous-led research institutions and empowering Indigenous values, research methods and perspectives in climate and environmental science fields,” Whyte said.

During his tenure as a U.S. Science Envoy, Whyte will continue to work at U-M.

“I hope that being both rooted on campus and serving as a U.S. Science Envoy will enrich cross-pollination while I am in service,” he said.

The U.S. Department of State’s announcement includes a list of the seven honorees.

This story originally appeared on the Michigan News website.