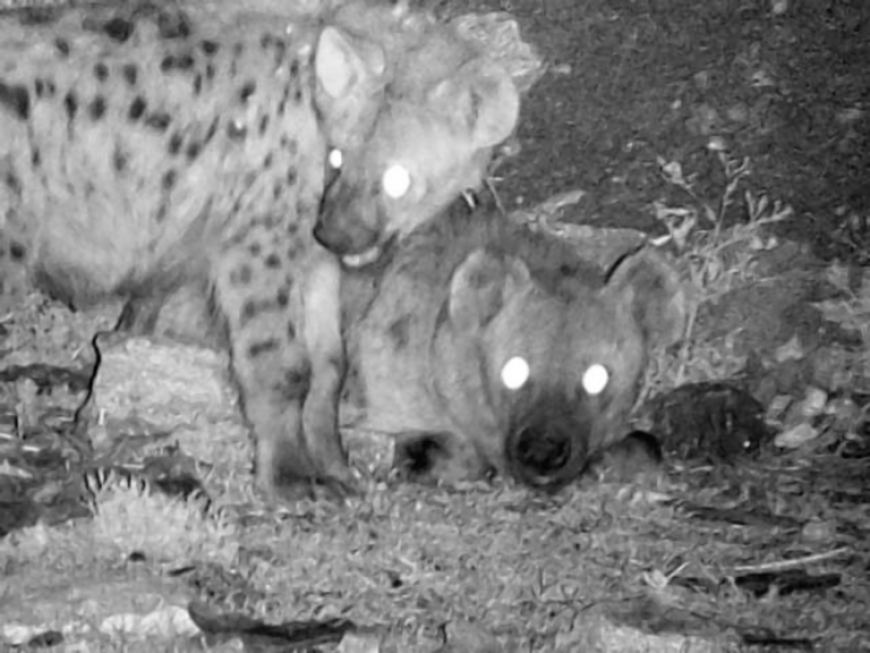 Hyenas are frequently vilified and often feared. Hemingway once described the hyena as a stinking, foul devourer of the dead, with jaws that crack the bones the lion leaves.

But a new study concludes that spotted hyena scavenging provides significant public health and economic benefits to the African cities they roam.

In a study conducted in and around the Ethiopian city of Mekelle, home to 310,000 people and 120,000 livestock animals, a University of Michigan conservation ecologist and two colleagues found that spotted hyenas annually remove 207 tons of animal carcass waste.

Mekelle is the capital of northern Ethiopia’s Tigray region. The carcasses of livestock animals that are slaughtered for food there, or that die naturally, are often dumped at the local landfill or on roadsides, where hyenas feed on the waste. The researchers wanted to know whether hyenas—by removing this waste from the environment—might also prevent pathogens from jumping into people and livestock.

They determined that hyena scavenging annually prevents five infections of anthrax and bovine tuberculosis in Mekelle residents and 140 infections in cattle, sheep and goats. This disease-control service potentially saves the city $52,000 annually in treatment costs and livestock losses avoided.

The study, published online Sept. 26 in the Journal of Applied Ecology, is the first to quantify the public health and economic benefits of scavenging by spotted hyenas.

“Yes, the effects are modest. Even so, this study totally upends the traditional narrative around hyenas—that they are a nuisance and should be removed,” said U-M’s Neil Carter, senior author of the study and an assistant professor at the School for Environment and Sustainability. “This is an important contribution to a growing body of work that highlights the benefits of predators and scavengers, rather than focusing only on their costs to humanity.”

To estimate the benefits of spotted hyenas, the researchers examined their feeding habits and the population size around Mekelle. During the daytime, the Mekelle hyenas rest at sites outside the city to avoid human disturbances; they come into the city at night to feed.

The field data were collected and analyzed by study lead author Chinmay Sonawane, a former student of Carter’s who is now a doctoral student at Stanford University.

Those data were integrated into a disease transmission model used to predict the number of anthrax and bovine tuberculosis infections arising in humans and livestock from infected carcass waste, as well as the costs associated with treating those infections and losing livestock. The researchers compared these public health and economic outcomes under two scenarios: hyenas present and hyenas absent.

“In comparison to the large cattle enterprises in the Global North, the benefits that we found are quite small,” Sonawane said. “However, losing even a single cow to anthrax or bovine tuberculosis can cause significant financial stress to cattle owners in Ethiopia, who tend to own much smaller herds of cattle than cattle owners in other parts of the world.

“In addition, we only estimated the benefits accrued from hyenas within 5 kilometers of the city. It is very, very likely that hyenas much further than 5 kilometers are coming into Mekelle and consuming even more waste.”

For Sonawane, the fieldwork involved spending nights at the Mekelle landfill and recording the number and type of animal carcasses (mostly cattle, horses, chickens, sheep and goats) available to the scavengers.

He counted the hyenas and watched them feed, using night-vision binoculars that operate at infrared wavelengths. The black-and-white photos and video clips he captured are haunting: the eyes of the hyenas glow with an unearthly fire.

The study authors determined that an individual Mekelle hyena annually scavenges about 2,100 pounds of carcass waste around the city. For hyenas feeding at the landfill, horse carcasses accounted for about 80% of that total, while poultry waste was the most frequently consumed type of animal carcass waste.

The researchers estimated a population size of 210 hyenas around Mekelle using “call-in surveys.” This field method involved broadcasting prerecorded hyena distress calls with a 45-watt megaphone from the top of a vehicle at five locations around the city. During each hour-long survey, the researchers counted the number of hyenas attracted to the sounds and visible with the night-vision binoculars.

Waste generation in Mekelle is expected to increase with the exponentially growing human population there, Carter and his colleagues wrote: “Given the financial constraints on waste collection and disposal services, sanitary conditions are expected to deteriorate further.” Hyena scavenging may, therefore, be even more valuable in the future.

The authors note that the benefits of hyena presence must be weighed against the costs. A 2011 study reported 10 nonfatal hyena attacks on humans annually in Mekelle, along with an estimated economic loss of $2,928 from 33 fatal attacks on cattle and small ruminants annually.

To preserve the public health and financial benefits provided by hyenas into the future, nonlethal management actions that minimize risks and enable hyenas to coexist with humans are necessary, according to the authors.

“By maintaining the hyenas’ access to waste, human-hyena conflict can be mitigated in Mekelle, and the sanitation and disease control benefits provided by hyena scavenging can be preserved or even increased,” they wrote.

But excluding hyenas from scavenging animal carcass waste may compel them to hunt livestock and could increase human-hyena conflict, as a previous study in Mekelle has shown.