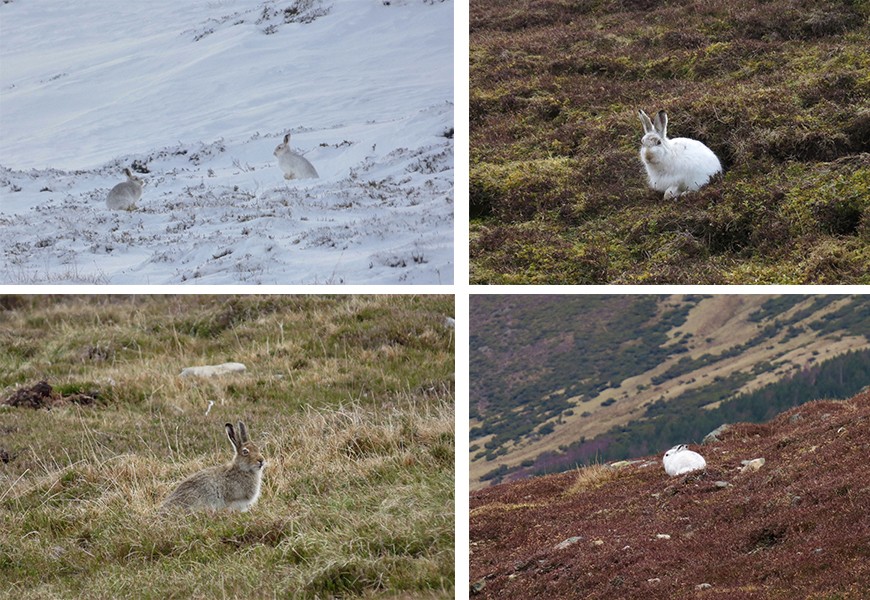 Mountain hares in Scotland show increasing camouflage mismatch due to less snowy winters, a new study shows. Mountain hares are one of 21 species that molt from a dark coat in summer to a white coat in winter to maintain camouflage against snowy landscapes. But due to climate change, the duration of snow cover is decreasing—creating a “mismatch” in seasonal camouflage that exposes the hares to predators.

Marketa Zimova, an evolutionary ecologist at the University of Michigan’s Institute for Global Change Biology and a post-doc at the School for Environment and Sustainability (SEAS), is the lead author of the new study, "Lack of phenological shift leads to increased camouflage mismatch in mountain hares," published in the scientific journal Proceedings of the Royal Society B (Dec. 16, 2020). Zimova, who is also a member of SEAS Professor Brian Weeks' lab, explains that the observed lack of change in the timing of important life events, or “phenological shift”—an organism’s ability to adapt the timing of their life events such as molts to changing environmental conditions—can endanger a species’ survival.

Zimova further explains, “Our earlier research on another color molting species—the snowshoe hares in Montana—showed that camouflage-mismatched hares suffer much higher predation rates. We also found that the increase in mortality due to mismatch will, in the absence of an adaptive shift, lead to population declines by 2100.”

Key to the mountain hare study were published historical datasets by Adam Watson and John Flux that describe the seasonal molt of wild mountain hares in the Scottish Highlands during the 1950s and 1960s. Zimova and her coauthors note that, according to their best knowledge, these earlier studies represent the longest running systematic historical survey of molt phenology in any species.

The authors of this study returned to the Scottish Highlands to carry out surveys and record the pattern and timing of molt over multiple spring and fall seasons. This allowed them to compare the present and the historical timing of the color molts. Further, by employing statistical analysis, the researchers calculated the change in temperature and snow cover over the past 65 years within the study region.

Despite the dramatic change in climate, there was little evidence of an adaptive shift in molt phenology in Scotland’s mountain hares—resulting in a mean of 35 more days a year when white hares are found on dark, snowless background since the 1950s. Scott Newey, an animal ecologist at the James Hutton Institute in the UK and a co-author of the study, said “The camouflage mismatch of mountain hares is really surprising and worrying, and suggests that some wild animals can’t adapt quickly enough to match the rate of climate change.” Concerns shared by L. Scott Mills, a professor at the University of Montana and a co-author of the study: “These are important findings because they indicate that some color-molting species are not responding as we’d expect based on what we’ve seen in other systems.”

The reason that the mountain hare molt phenology has remained relatively static is not clear, but Zimova hypothesizes that the reason might be due to the reduction in the number and diversity of predators associated with land management in large parts of the study area. Sean Giery, an Eberly fellow from the Pennsylvania State University and coauthor of the study, adds: “It’s an interesting scenario playing out in the Highlands. We saw this really distinct increase in camouflage mismatch that didn’t conform to findings in other ecosystems like Montana. It took us a while to realize that what we were seeing—steadily increasing camouflage mismatch in mountain hares—might be the result of an ecosystem subject to climate change, and a history of predator control. Without many predators, fitness costs of camouflage mismatch might be minimal.”

Zimova notes that recent climate change has already subjected wild populations to large change in environmental conditions, and failure of a species to adapt to these changes will ultimately result in decline and extinction. “If we want species to persist in a rapidly changing world, we need to understand their responses to climate change. This challenge includes considering a suite of anthropogenic changes, and how they interact.”

Read the full study on the Royal Society Publishing site.