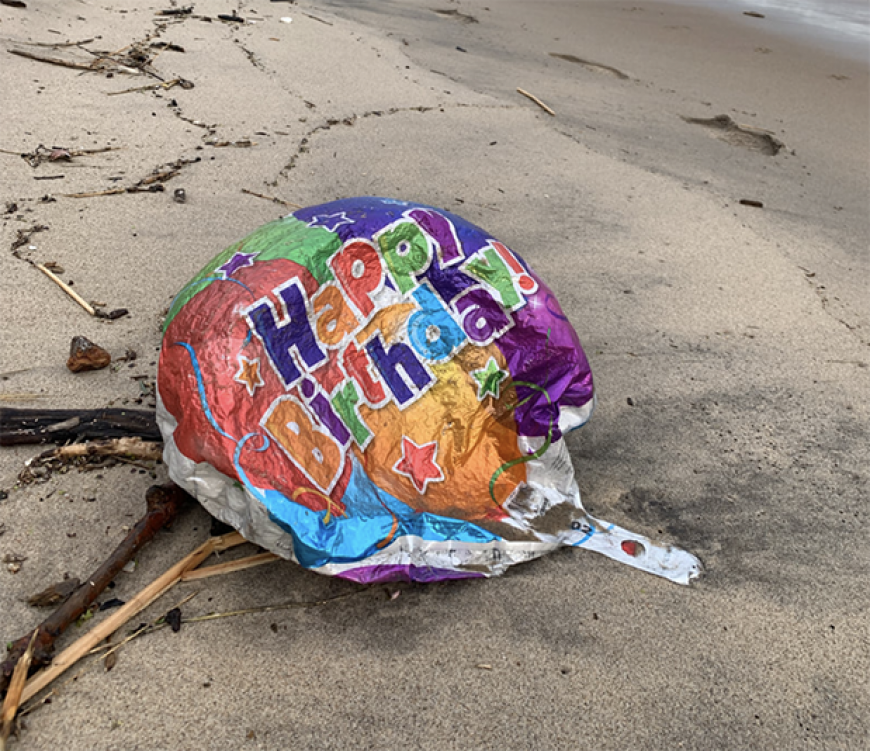 The environmental problem of balloon debris now has a bigger spotlight on it thanks to the efforts of Michigan high school sophomore Nisha Singhi and her mentors at the U-M School for Environment and Sustainability.

In October, Rep. Mari Manoogian of District 40 and Senator Mallory McMorrow introduced bills in the Michigan House (Bill No. 5373) and Senate (Bill No. 675) banning the intentional release of balloons into the outdoors.

“It’s exciting,” said Singhi, who attends the International Academy in Bloomfield Township. “It helps us spread more awareness about this issue. There’s so much more work that needs to be done, and this is just the tip of the iceberg. I’m really excited to see where this can go, knowing that these two bills have been introduced.”

The introduction of the bills was a complete surprise to Singhi and her parents, which was done on the same day that Singhi was shadowing Rep. Manoogian. Singhi had brought the issue of balloon debris to the attention of her state representatives last summer, but she walked away from the meetings without knowing if any action would be taken.

“Nisha did a full presentation on the balloon issue explaining what it was and trying to convince them of why it would be good thing for Michigan to pass this legislation,” noted Nisha’s father, Amit Singhi (MScEng ’89, MBA ’94). “They all said it was a relevant issue and they definitely were interested, but they didn’t commit to anything. We’re very proud of Nisha and what she’s done, and how she went about doing it.”

The bills have now been referred to the House Natural Resources and Outdoor Recreation Committee and the Senate Environmental Quality Committee for review.

Singhi first learned about the harmful effects of balloon releases on the environment in early 2020 after reading about them as an eighth grader. “About 18,000 pieces of balloon debris were found in the Great Lakes between 2016 and 2018,” she said. “That was really shocking to me.” Balloons that are released at weddings, graduations, and other celebrations can cause power outages; create litter that winds up in oceans, lakes, rivers, and other natural areas; and kill wildlife.

The young activist reached out to SEAS graduate Lara O’Brien (MS ’20), whose balloon debris research was cited in the article, so that she could learn more and get advice on how to spread awareness of the issue at her school and in the local community.

“I was extremely impressed that Nisha, an eighth-grader, had read about the issue and felt inspired to do something about it,” said O’Brien, who created the Balloon Debris Survey that collected data on more than 3,000 pieces of balloon debris from all over the world, including the Great Lakes, Canada, United Kingdom, and Australia.

“María and I shared information about my balloon debris research, plastic pollution in the Great Lakes, and community engagement and outreach. We also talked about various things that Nisha could do to raise awareness at her school,” O’Brien explained. This included giving presentations about the dangers of balloon releases, creating a pledge that students could sign stating that they would not release balloons and would use safe alternatives instead, and organizing a successful beach cleanup.

At the suggestion of O’Brien, Singhi eventually contacted her local officials and state representatives to bring greater attention to the issue, which led to the introduction of the balloon bills in October.

O’Brien and Dabrowski are quick to note what a delight it’s been to mentor Singhi, whose passion for the issue inspires and energizes them.

“Nisha has incredible drive and ambition and is always pushing herself to do more and go further,” said O’Brien. “I hope this will inspire other SEAS students to mentor young students like Nisha, who are interested in becoming more involved with the environment and climate change. These young people are our future leaders, and SEAS can help amplify their actions and their voices and help them make a difference.”

“Mentoring Nisha has been invigorating,” added Dabrowski. “It's been inspiring to see the passion and energy she has, and she is an incredibly strong public speaker. What I like most about working with Nisha and Lara is the emphasis on the group effort—knowing that all three of us bring a wealth of experiences and perspectives and drive to this project, and that it is paying off.”

As for Singhi, she said she has no plans to stop her advocacy and wants to “widen the circle” of people who become aware of the issue of balloon releases.

Her advice to other young people who want to make a difference in the world? “Choose a problem that is near and dear to your heart, something that is small enough that you can tackle full-heartedly, and encourage other people to get involved with you.”