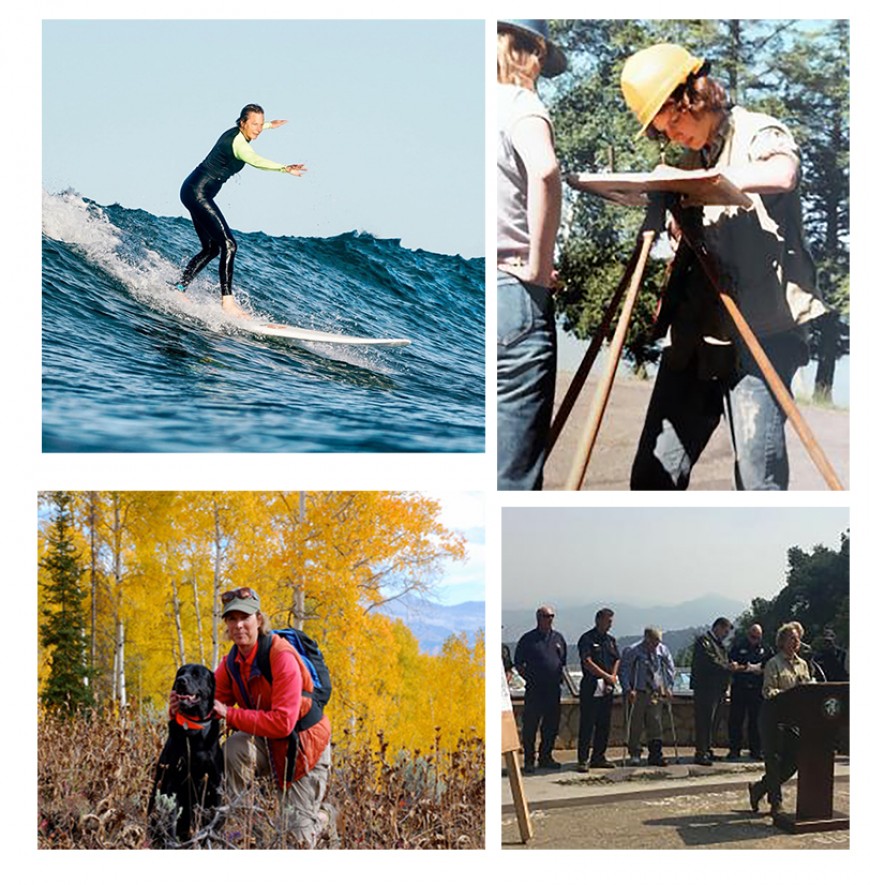 When trying to find a time to meet via Zoom, alumna Nancy Arkin remarked that it all depended on the tides. But no, Arkin—who recently retired from a career spanning four decades—is not a hydrologist or an aquatic scientist. She’s a surfer. And the “swell” was especially good that week.

In some ways, Arkin (BS ’82, MLA ’84)—a landscape architect who spent much of her life in the mountains of Colorado, Wyoming, Montana, and California, has always been “catching the next wave.” While Arkin credits her escalating roles at the National Park Service and the U.S. Forest Service to professional experience and education, she relates that it was also due to her willingness to embrace new challenges—and take a few risks along the way.

“My sister once said, ‘Gosh, you're really lucky. Everything always works out for you.’” Arkin recalls, “And I answered her, ‘Well, maybe. But I also was open. I was open to opportunities as they presented themselves.’”

That first opportunity came when Arkin, as an undergrad at U-M, landed a seasonal job on a five-woman survey team on the logging roads of Montana’s Deerlodge National Forest for the U.S. Forest Service. That experience helped her to win a place as a co-op student at the National Park Service (NPS) in Denver—which funded her thesis as a master’s student at the School for Natural Resources (now SEAS). After completing her Master of Landscape Architecture degree in 1984, she earned a permanent position at NPS as a landscape Architect/Planner.

“That was my first real job,” says Arkin. “We were the specialists that came in to do the project work all over the country—Yosemite, Alaska, all over the place. I also did a long-term detail for 18 months at Sleeping Bear Dunes in Michigan.”

After seven years based in Denver, Arkin was off to the Santa Monica Mountains National Recreation Area to serve as the Chief of Land Use Planning.

“At the time that this opportunity opened up,” says Arkin, “I didn't want to live in Southern California, and I didn’t want to move. But it turned out to be probably the best job I ever had—a great learning experience. It was awesome.”

After three years in California, Arkin set her sights on Jackson Hole, Wyoming, and voluntarily took a small step “backwards” in her career to fulfill her dream. In 1993, she transferred to Grand Teton National Park, taking on the role of Park Planner.

Five years later, in 1998, Arkin made a decision to leave the Park Service, a choice that confounded her fellow “Parkies.”

“That was unheard of—because I had 17 years in,” says Arkin, “But I didn’t want to leave Jackson, and an opportunity dropped in my lap.”

That opportunity was a position as Senior Planner and  Current Planning Manager for Teton County—a role that she kept for five years before “jumping over to the private sector”—for an associate position at Verdone Landscape Architects. After seven years at the firm, an opening came up on the Bridger-Teton National Forest, and Arkin returned to the U.S. Forest Service—coming full-circle to the federal agency that had jump-started her career 30 years before.

It was in this role of Recreation, Wilderness, and Trails Program Manager that Arkin recalls a project in which she takes special pride: leading the Comprehensive River Management Plan (CRMP) for the vast Snake River system—shortly after its designation as a Wild and Scenic River.

“I think it was one of the largest designations—with over 400 miles of rivers—including the headwaters of the Snake with 12 tributaries,” says Arkin. “It was a particularly interesting project because it was so big, so complex, and involved so many agencies and people—the Forest Service, the Park Service, and others. “There were also controversial issues to contend with—including elk feeding grounds.”

Arkin notes that completion of a CRMP is required within two years of a new designation—a mandate that virtually no one had achieved.

“It took some serious work,” she says. “But we finally got everyone on board. And we got it done—on time.”

Arkin points out that landscape architects bring special skills to projects of this scale, particularly those involving multiple agencies with dueling protocols and industry-specific terminology.

Arkin relates that her ability to act as translator across disciplines often came as a surprise to those who didn’t grasp the scope of landscape architecture.

“Most people don’t understand what landscape architects actually do—the holistic and interdisciplinary nature of the work,” she says. “It's artistic, it's science, it's biology, it's engineering, it's planning, and it's being able to bring people together, and run a meeting. It’s being able to build coalitions, being able to work with people through a process to optimize the outcome. In the private sector, it’s also about dealing with entitlements and public hearings on a project’s viability. And in all of these cases, it comes down to speaking different languages.”

Like many who are drawn to the Park Service, Arkin loved the outdoors as a child, and cherished the dream to work in public lands management. But when she came to U-M as an undergrad, she initially considered pursuing art or science. “Back then,” she says, “I had no idea that landscape architecture existed.”

Fortunately, Arkin happened to take a course in environmental design.

“I thought, ‘Wow, this combines art, science, the outdoors—everything I love,” she recalls. “It was a great fit, and they actually let me into the MLA program in my senior year, which was a real gift.”

Like many SEAS alumni, Arkin counts the “Woody Plants” course, taught at the time by beloved professor, Burt Barnes, among her favorite memories. She remembers his Halloween tradition of teaching in costume, as well as the “Flight of the Bumblebees” (alumni from the era will understand the reference). Arkin’s 1984 graduating class was also among the last to spend time at Camp Filibert Roth in the summer. (Established in 1929, the camp served as a summer field experience for SEAS students until its closure in 1987.)

Arkin returned to California in 2014 to continue her work for the U.S. Forest Service at Los Padres National Forest as a Public Services & Engineering Staff Officer. In 2017, she began her final role as a Service Line Manager for the Forest Service Enterprise Team and retired near the close of 2020.

In her home in Santa Barbara, Arkin apologizes on the Zoom call that her hair is still damp from the sea, admitting that retirement (surfing in the morning, yoga in the afternoon) suits her very well.

When asked if she has any advice for today’s students, she returns to the driving philosophy that shaped a remarkable career, as well as an interesting life.

“On that first seasonal job at the Forest Service, I was surveying logging roads,” she says. “That was not my dream job. But then, that job led to something more interesting. It was the same when I came here to Santa Barbara in 2014. I didn’t want to move, but I thought, ‘Well, why not?’ And I love it here. It's kind of been that way all along.

“So, if I have any advice, I’d say that you should keep open to what presents itself. There's always something good that comes out of it—and usually a lot of good. At least, that’s what I’ve found. So, I'd just say ‘go for it.’ Whatever shows its way, just go…”

The U.S. Forest Service featured Nancy Arkin in HerStory, a series highlighting the contributions that women have made to the agency. Read HerStory: Nancy Arkin (Nov. 6, 2020)