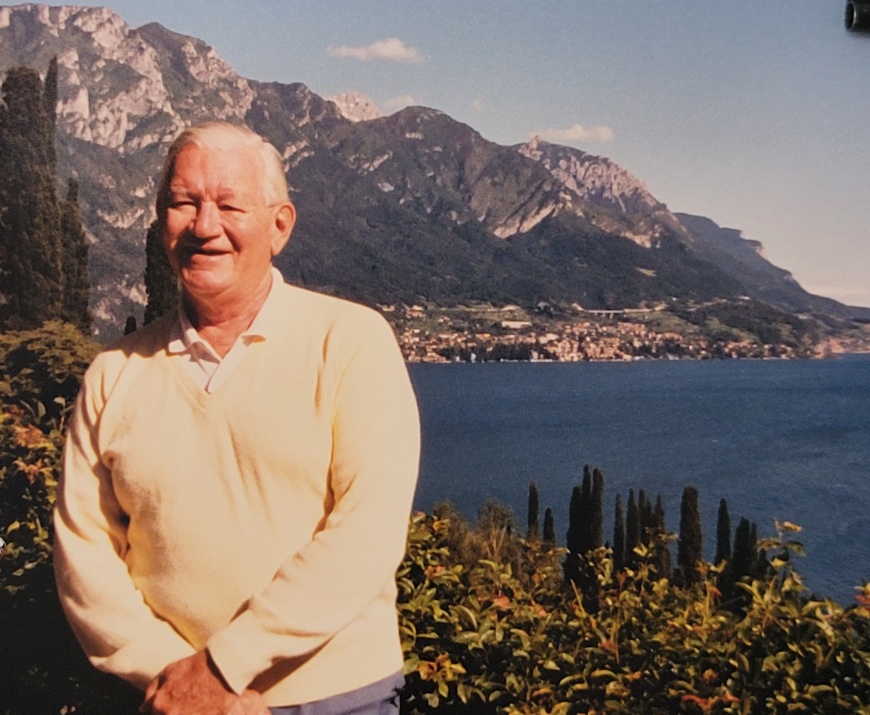 Caption
Leonard B. Dworsky (PhD ’56), father of Donald L. Dworksy and Richard F. Dworsky (BSF ’65), pictured at Lake Como. The Dworsky Award in Water Resources Governance is named after the three Dworsky family members, who all graduated from SEAS and went on to administer natural resources policy in a variety of governmental organizations.
By Matthew Kasten |

The University of Michigan School for Environment and Sustainability (SEAS) is pleased to announce the establishment of the Dworsky Award in Water Resources Governance.

The endowed award, established through a philanthropic gift from alumnus Donald L. Dworsky (MS ’71), supports a unique area of study. The Dworsky Award will provide an annual monetary prize to a student who has submitted the highest quality paper on water resources management. Topics include institutional governing arrangements, management of water quality and supply, water policy and more.

The award has been established to encourage scholarship in this field and to inspire students to consider careers in the public administration of American water resources.

The award is named after the three Dworsky family members who attended SEAS, known during their time here as the School of Natural Resources. Each of the three Dworskys went on to administer natural resources policy in a variety of governmental organizations.

After graduation, he was a regional civil engineer in his home state of Illinois, where one of his first tasks was to control a cholera outbreak at Manteo State Mental Hospital. He next became the chief engineer for Cook County, Illinois, before serving in the U.S. Army during World War II as a sanitary engineer and malaria control officer. After the war, as a commissioned officer in the U.S. Public Health Service, he was the first employee of the federal Water Pollution Control Administration (precursor to the Environmental Protection Agency) from 1948 to 1962. He shaped the initial organization, administration and policies of an emerging federal role in water resources that, due to his leadership, treated river basins as ecological entities rather than a resource subject to the management of every local and state entity. Also in this position, he served as the director of the federal Missouri River Basin Interagency Committee as well as the Columbia River Basin Interagency Committee—new federal roles in comprehensive river basin management—where he initiated water quality monitoring programs, administered sewage works construction programs, developed regional plans for water supply and pollution control, and initiated legal action against interstate pollution sources.

Leonard designed and prepared the first national report on water pollution for the President’s Water Resource Policy Commission that identified 22,000 major pollution sources in 1950, and included industrial water use for the first time in the national census (1955). He proposed policies that led to the Water Pollution Control Act of 1956 (authorizing stream flow regulation following proper waste management), the Water Supply Act of 1958 and the Safe Water Drinking Act of 1974. He was a member of the federal Water Resources Council and the United States Advisory Commission on Intergovernmental Relations.

Upon retirement, Leonard directed the Cornell University Water Resources and Marine Sciences Center, retiring as Emeritus Professor in Civil Engineering (1964 to 19994). As a professor, he established the Great Lakes inter-university policy seminars with other American and Canadian universities. As a member of the Expert Committee on Societal Affairs under the Great Lakes Water Quality Agreement, provided critique and program assistance to the International Joint Commission which administers Canadian-American water resources policies from 1973 to 1980. He conducted the first environmental training programs for the U.S. Army Corps of Engineers in the 1960s, and published a documentary history of Water and Air Pollution in the United States in 1970. He also served as the water resources advisor to President Lyndon B. Johnson from 1967 to 1968.

His son, Richard F. Dworsky (BSF, U-M School of Natural Resources, 1965; MS, Outdoor Recreation, University of Colorado, 1972; PhD, Water Resources, University of Massachusetts, 1986), served as the chief forester of Puerto Rico, and worked at the Interstate Commission on the Potomac, the Lake Champlain basin study of the New England River Basins Commission, and the Genesee Finger Lakes Planning Board before becoming the career chief planner for the U.S. Department of Interior’s Bureau of Land Management in Alaska, the State’s largest land management agency.

Another son, Donald L. Dworsky (BA, Cornell University, 1970; MS, Natural Resources Administration, U-M School of Natural Resources, 1971; JD, University of Wisconsin, 1974), was the policy, legislative and budget examiner for unquantifiable natural resources such as fish, wildlife, historic preservation, and parks and recreation, including wilderness, trails and wild and scenic rivers, at the Office of Management and Budget, Executive Office of the President, under Presidents Nixon, Ford and Carter, before working as an environmental protection specialist in the Office of the Secretary of the Department of the Interior, where he was a member of the National Response Team for environmental emergencies.