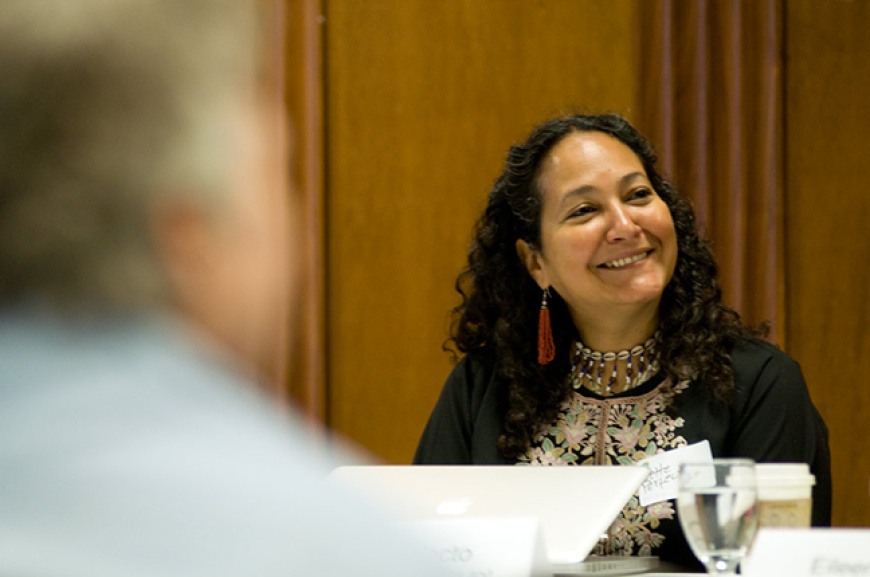 The University of Michigan recently held its fourth talk in the Real-World Perspectives on Poverty Solutions speaker series. Professor Ivette Perfecto of the U-M School for Environment and Sustainability (SEAS) was the keynote speaker for the talk, and presented a lecture titled “Biodiversity, Coffee Production and Dignified Livelihoods Under a Globalized Economy.”

Perfecto is a James E. Crowfoot Collegiate Professor of Environmental Justice at SEAS, and is a widely recognized leader in the environmental justice movement with research in sustainable agriculture, biodiversity and food sovereignty. She is a major leader in the ecology and agroecology fields, and is the founding member of the “Alianza de Mujeres en Agroecología: Alliance of Women in Agroecology.”

Perfecto noted the importance of coffee, as about “400 billion cups of coffee” are consumed every year, and coffee provides livelihoods for at least “60 million people across many countries in the Global South,” including Indigenous peoples. She then addressed the importance of shaded coffee landscapes in promoting biodiversity. Shaded coffee farms are important for biodiversity, says Perfecto, as they “represent a high-quality matrix through which wildlife can move” and “provide habitat for a wide-range of biodiversity.” These coffee farms thus create a “refuge of biodiversity” for organisms such as trees, epiphytes, ants and other insects, reptiles, amphibians, birds and mammals.

Perfecto then discussed the history and implications of coffee production in the Global South. In 1980, there was a “technification” process that moved throughout Latin America due to a debt crisis from colonial development. The USAID came to relieve these countries of their debts, investing 81 million in a program to intensify coffee farms production in northern Latin America. This technological package included “higher-yielding coffee varieties, reduction of elimination of shade trees and increased application of herbicides, fertilizers and fungicides.” These high-yielding plantations were stripped away of shade as they became intensified for coffee monocultures, leading to a decrease in biodiversity in these areas, Perfecto explained. The International Coffee Agreement was then abolished in 1989, allowing any entity to produce as much coffee as they want. As a result, coffee production in Vietnam grew exponentially, coming only second to Brazil. This led to a “dramatic decline in the price” of coffee internationally.

Perfecto then asked the audience who gets to decide what the landscape is going to look like—whether it is going to be a “monoculture or shaded system.” She revealed that it is, in fact, the farmers who are living there who get to decide how to pursue these systems. However, these are mainly small-scale and local farmers, and “more than 90% of these farmers have less than 10 hectares” of land. Additionally, every time the price of coffee decreases, it puts millions of these farmers below the extreme poverty level. One of the solutions to emerge from the decrease in coffee prices was the “Alternative Trade in Coffee,” including Certified Organic, Fair Trade, and Shade-Grown, said Perfecto. Certifications such as Fair Trade set a long-term agreement with farmers and guarantee a minimum price to ensure farmers receive a fair value for their crop. However, Perfecto noted that “only a few studies have been able to find important income increases or prove tangible effects in terms of reduced poverty and increased food security” with regards to certification initiatives. Small-scale farmers have had more success in reaching security with the rise of “cooperatives,” or alternative markets. For example, in 2021 the Pachamama Coffee Cooperative received the Sustainability Award for Business Model Category Winner. This cooperative owns both the roasting and processing plants, and are engaged from production to consumption, ensuring maximum profits go to farmers.

Perfecto closed her talk by focusing on how shaded coffee farms can improve farmer livelihoods. These types of coffee systems contribute to “self-sufficiency and indirectly promote agency among farmers,” she noted. Additionally, diverse farms can reduce vulnerability to price fluctuations in the international coffee market and can protect at-risk farming communities from climate change. In her final remarks, Perfecto said “coffee production has the potential to lift farmers out of poverty.” She suggested that this cannot be achieved in the current way the international coffee industry is operating; however, through cooperatives and diverse farming practices this may be achievable.