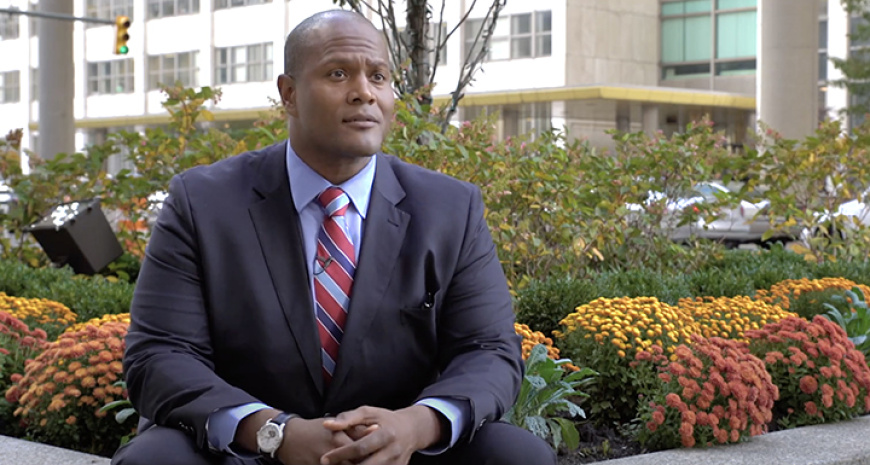 Congratulations to Rep. Joe Tate (MS/MBA '17), a University of Michigan School for Environment and Sustainability (SEAS) alumnus who made history by becoming the first Black lawmaker to lead Michigan's House of Representatives. In addition to being selected November 10 as the Michigan House's next speaker, he also became the first Black leader to oversee either of Michigan's legislative chambers.

Tate is a Democratic member of the Michigan House of Representatives from District 2, representing Detroit. He was elected in 2019.

"I am proud to serve alongside my esteemed colleagues as Speaker of the House," said Tate. "Together, we will shape sound policy that positively impacts our state and generates opportunities for all Michiganders to reach their full potential. I am confident that we are destined to do great works in the days before us."

Tate was a dual-degree student at SEAS in Environmental Policy and Planning and the Erb Institute after spending four years as an infantry officer in the United States Marine Corps. During his service in the Marine Corps, he managed several economic development projects with local farmers in Helmand Province, Afghanistan. Tate is interested in the intersection of government and business, specifically how municipal public policy implementation affects its intended stakeholders.

In 2017, Tate collaborated with fellow Erb Institute student Elana Fox to develop the Detroit Youth Impact Project, a partnership with the Erb Institute, Sustainable Brands, Detroiters Working for Environmental Justice and EcoWorks. The project brought 20 students who work with the Youth Energy Squad (YES) to the Sustainable Brands conference where they received on-site mentorship opportunities with sustainability professionals.

As an economic development professional and Marine Corps veteran, Tate ran for state representative to continue his service to community—a value that was taught to him by his father, a Detroit Fire Fighter, and his mother, a public school teacher.

Tate returned to SEAS in May 2019 to deliver inspiring words to graduates in his keynote address at commencement. Watch his commencement address below.

Adapted from a previously published profile of Joe Tate.

Watch a video of Joe Tate during his time at SEAS and the Erb Institute.