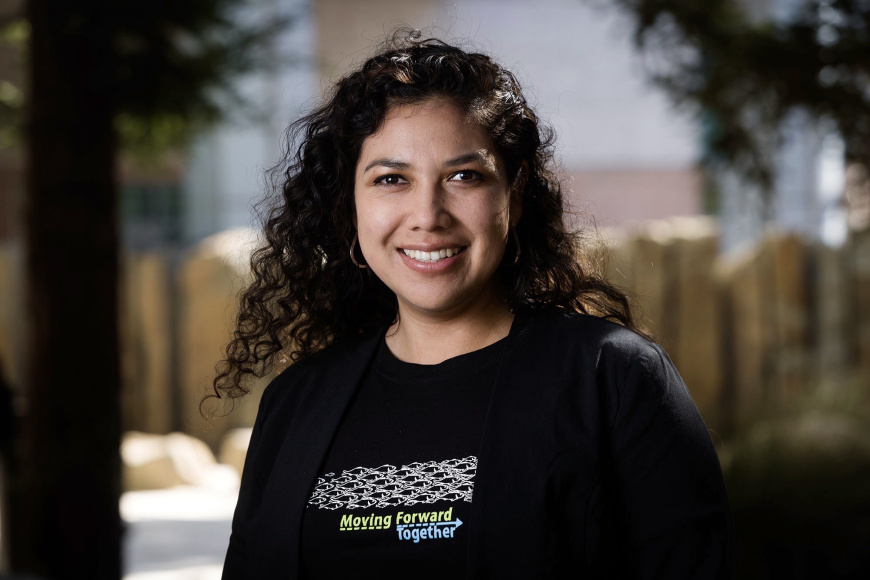 Within a month after taking a new position as project coordinator at Moving Forward Network (MFN) in Los Angeles, University of Michigan School for Environment and Sustainability (SEAS) alumna Cecilia Garibay (MS/MPP ’22) found herself in the Clean Air Caravan en route to Sacramento. There, she and 15 community members joined hundreds of others to testify at the California Air Resources Board (CARB) public hearing held in October.

“We were there to support the Advanced Clean Fleets (ACF) rule to help transition heavy duty trucks to zero emission,” said Garibay. “There were community members from Long Beach and San Bernardino, and along the way we met with community groups in Fresno, Oxnard and Oakland. It gave us a great opportunity for knowledge sharing, community building and seeing how every community essentially has the same problem. At the CARB hearing, I testified about why the ACF is needed, but mostly about why it needs to be stronger.”

Reducing emissions from the U.S. freight transportation system—and its oversized impact on communities already overburdened by pollution and social inequities—is the primary goal of MFN. Serving as a national network for over 50 organizations, MFN centers grassroot, frontline-community knowledge, expertise and engagement from communities across the U.S. that bear the negative impacts of the global freight transportation system. Their organizing approach reflects the belief that the people bearing the brunt of the negative impacts of ports and freight transportation should lead the way in shaping the fundamental conditions that affect their lives, health, and communities.

Garibay explained that her role at MFN focuses on the campaign side to achieve zero emissions from the freight transportation system—which includes, but is much broader than—truck emissions alone.

“It involves locomotives, cargo handling equipment, and marine vessels,” said Garibay. “And it also includes indirect sources that impact a lot of our communities as well. Freight not only goes from ports to the stores, to communities, but it also goes through communities.”

One of Garibay’s first projects at MFN was preparing a presentation that MFN members would present to the Environmental Protection Agency (EPA)’s Office of Inspector General (OIG), focused on the impacts and solutions to addressing pollution from oceangoing vessels.

“At this point, the EPA doesn’t really have strong regulations requiring zero emissions for marine vessels and the cargo handling equipment at the ports,” said Garibay. “So, we supported the coordination between OIG and MFN’s grassroot members. In order to create real and long-term change, we need to make sure that regulations are reflective of the voices and leadership from those who are directly impacted.”

Another major endeavor for Garibay involved a “year in review” of the EPA’s progress since MFN submitted a letter of recommendations across multiple sectors in 2021.

“In MFN’s follow-up letter in 2022—which we submitted on November 17—we acknowledged that the EPA has made some movement, particularly in the area of trucking,” said Garibay, “but compared to the massive amounts of work that needs to be done, we still have a long way to go. So, part of the intention of the letter was to remind the EPA that we are here—while recommending how to engage with communities to move forward in the best possible way.”

Looking toward the future, Garibay is creating fact sheets and a petition designed to amplify the demands that have come from MFN members around addressing the deadly impacts from freight pollution.

“There’s been a lot of money coming to the EPA through President Biden’s Inflation Reduction Act that provides resources to EPA’s programs such as the Environmental and Climate Justice Block Grants, the Greenhouse Gas Reduction Fund, and the Diesel Emissions Reduction Act,” said Garibay.  “Alongside the increased funding, there is a lot of media attention to Mr. Regan’s prioritization of addressing environmental justice (EJ) issues. We know that resources are important, but so is regulation. So, at MFN, we continue to demand that whether it be through resources or regulations, we need zero emissions now!”

The value of mentorship

At SEAS, Garibay immersed herself in the EJ specialization while simultaneously pursuing a Master of Public Policy at U-M’s Ford School of Public Policy. The dual degrees—and mentorship opportunities—prepared her well for her current role at MFN.

“My education and my time at Michigan—and particularly the mentorship I received—were really essential in helping me to get where I am,” said Garibay. “It started with Professor Rebecca Hardin. She actually had me over for tea during Visit Day. That told me that the professors here are really interested in what you’re doing and what your interests are—along with just being really personable. So, that was one of the first things that actually made my decision to go to Michigan.”

Hardin, who teaches in the EJ specialization at SEAS and is now the faculty director of justice, equity, diversity and inclusion (JEDI), served as Garibay’s academic advisor. Hardin is also the director of Michigan Sustainability Cases and oversees the open-access platform, learngala.com, where students, faculty and professionals from around the world can collaborate on creating and using multimedia cases about sustainability science.

In 2020, Garibay teamed up with her fellow dual-degree classmate Dolores Perales, who earned an MS at SEAS and a Master of Urban and Regional Planning at U-M’s Taubman College in 2022. The pair developed the Michigan Sustainability Case, “A Tale of Two (Polluted) Cities: Latinx communities and their allies face air pollution in Southwest Detroit and Southwest Los Angeles.”

Garibay, a first-generation Latina from California, and Perales, a Latina advocate from Detroit, researched the contrasts—and commonalities—of these distinct communities through an EJ lens. Their case, which focuses on air quality, asks how EJ issues affect different communities in different ways, and how Latinx members voice their concerns. Critically, the case asks how those concerns may feed into advocacy and real action.

Garibay shared a few other highlights from her time at SEAS, including her role as vice president for diversity in student government, and her involvement with the DEI Committee in her second and last year at SEAS.

She had taken a summer off from the committee, Garibay related, when she was given the opportunity to serve as Graduate Student Research Assistant on the Green 2.0 report, “The State of Diversity in Environmental Organizations” in former SEAS Professor Dorceta Taylor’s “Vision for a Sustainable Environmental Future” lab. It was Taylor who introduced Garibay to another mentor, SEAS Lecturer M’Lis Bartlett—for whom Garibay served as her GSI. In Garibay’s final semester, Bartlett also advised her on an independent study.

“I am thankful to M’Lis for providing me the opportunity to discover a love for teaching environmental justice and doing it in a way that I could highlight issues of processes and systems that lead to injustices. The whole experience was wonderful because of her support. And because she’s such a caring, wonderful human, she helped me feel like I could actually accomplish and succeed at whatever I was doing at Michigan—because I had support from her, Dr. Hardin and later on, the DEI Office team of Lauren Davis, Kris Surla and Vanesa Jackson.”

In 2022, Garibay received the DEI Champion Award—which recognizes a student who serves as a fierce advocate and ally for DEI within the SEAS community, and who actively strives to enhance the success of students in their endeavors during their time at SEAS and beyond.

“I am grateful that I had those wonderful mentors in my life,” said Garibay. “And that also, by chance, they were all women—who know what it’s like to be in this field. I'm also very grateful—and very fortunate—to have this position at MFN. It's only the beginning, and I'm really excited to see what comes next.”