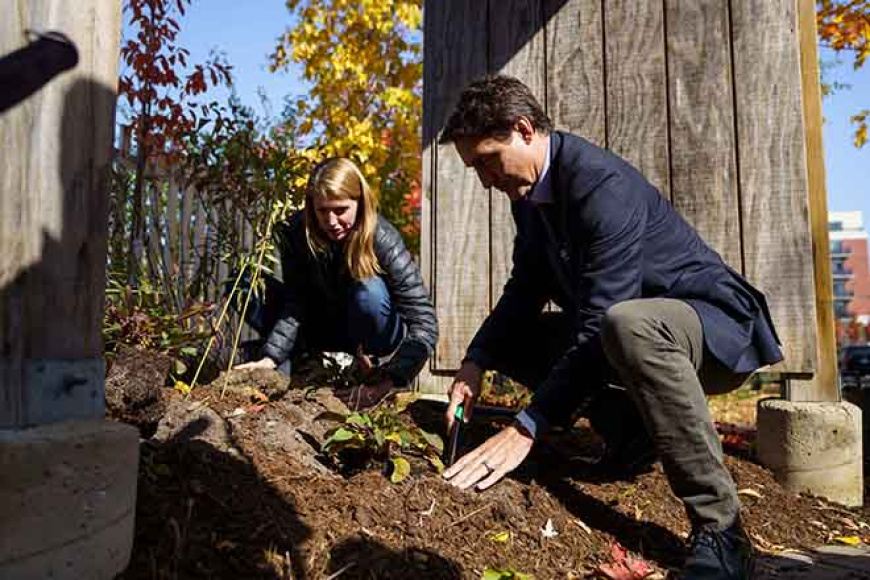 Landscape designer Becca Robinson (MLA ’09) has met with hundreds of homeowners to help them identify ways they can reduce their environmental footprint and make their homes and landscapes more sustainable. Recently, the University of Michigan School for Environment and Sustainability (SEAS) graduate and her colleagues had the opportunity to share those same tips with none other than Canadian Prime Minister Justin Trudeau.

“He’s really good at making you feel heard,” Robinson said about meeting the prime minister. “You can tell he’s really listening to what you have to say.”

Reep is an environmental charity located in Kitchener, Ontario, Canada, whose focus is teaching people how to live more sustainably. It is one of the organizations that helps administer the Greener Homes Initiative, according to Robinson, who graduated with a Master of Landscape Architecture degree from SEAS.

Trudeau toured the Reep House for Sustainable Living, a 100-year-old heritage home that has been renovated to be as energy efficient as possible and has achieved a Leadership in Energy and Environmental Design (LEED) for Homes Canada Platinum rating, the highest level of LEED certification. The demonstration home and education center features what Robinson describes as “real-life examples” of the different energy-efficient and water management technologies available to homeowners, including heat pumps, insulation options, a greywater tank for toilet flushing and a soakaway pit—the costs and benefits of which were highlighted during Trudeau’s 45-minute house tour.

Afterwards, Trudeau had the chance to explore the outside grounds, where Robinson showed off Reep’s native plant garden, green roof, solar panels and permeable driveway, which are some of the options homeowners can use to reduce stormwater runoff and make their properties more climate resilient.

“What I was excited to tell Trudeau about is that the city of Kitchener has partnered with Reep to work with private property owners on stormwater management and disaster mitigation,” Robinson said. “We provide consultations to landowners in priority subwatersheds to help them understand from a landscape architecture perspective what tools are available to reduce stormwater runoff from their property, decrease flood risk and improve water quality.”

Following the tour, Trudeau stayed an additional 45 minutes for an impromptu pizza lunch with Reep staff. “We asked if the prime minister wanted to join us for pizza, and he said he’d love to,” Robinson said. “He asked a lot of questions about the technologies in the house, and he was really interested in heat pumps and how they work. I was impressed with his level of detail in wanting to understand some of the technologies that haven’t quite crossed over into the mainstream yet.”

Though some might “freeze” in the presence of a world leader, Robinson said she wasn’t nervous talking to Trudeau. Instead, “I was excited because I love talking about sustainability practices with everybody, which probably comes from my experience at SEAS,” she said.

What did make Robinson feel uncomfortable was the “wall of media” that was there to photograph Trudeau’s visit. “There was a photo opportunity with me, the prime minister and a volunteer, and when I turned around to grab something, there were a ton of cameras I had forgotten about,” Robinson said. “So that part was pretty intimidating, though the prime minister was very good about disregarding the press scrum.”

And the biggest message Robinson wanted to share with Trudeau? “That people really want to do something to benefit the environment, but they often don’t know where to start. And there is an important role for an organization like Reep, which is to help give people tangible ideas of what they can do to mitigate or adapt to climate change that is specific to their property, budget and long-term plans.”

“I learned that for a reason at SEAS”

Robinson, who hails from North Carolina, has worked at Reep for five years. After doing consulting work in Detroit and Edinburgh, Scotland, Robinson felt the pull to work for a mission-driven organization. When her husband—fellow SEAS graduate Derek Robinson (PhD ’09)—accepted a teaching position at the University of Waterloo, Robinson discovered Reep, where she “loves using spatial information, drawings and maps to help people understand where they live in the watershed and why their actions matter.

“Many people don’t know where water goes after it falls on their house,” Robinson added. “So, it’s fun to hold a public meeting with a neighborhood association and show people where rainfall lands in a sewershed, where that pipe system carries its water and what the creek looks like when stormwater enters a natural waterway. You can see the lightbulbs going off.”

In addition to educating homeowners, Robinson shares her passion for stormwater management with students in the School of Environmental Design and Rural Development at the University of Guelph, where she co-teaches a landscape rehabilitation design studio with SEAS graduate Robert Corry (PhD ’02).

Robinson says teaching is an extension of what she learned at SEAS, which ingrained in her the role that landscape architecture can play in solving global environmental problems, especially when combined with other disciplines.

“I love the multidisciplinary approach that SEAS takes, which has served me so well in my career, especially when I meet other folks who didn’t have that in their education,” Robinson said. “The more I meet other people, the more I realize how hardwired that interdisciplinarity is at SEAS, but not always in other programs.

“I’m the only landscape architect at Reep,” she continued, “and being able to speak the same language or unify with other disciplines, such as engineers, on a common goal is helpful. I feel as though I learned that for a reason at SEAS.”