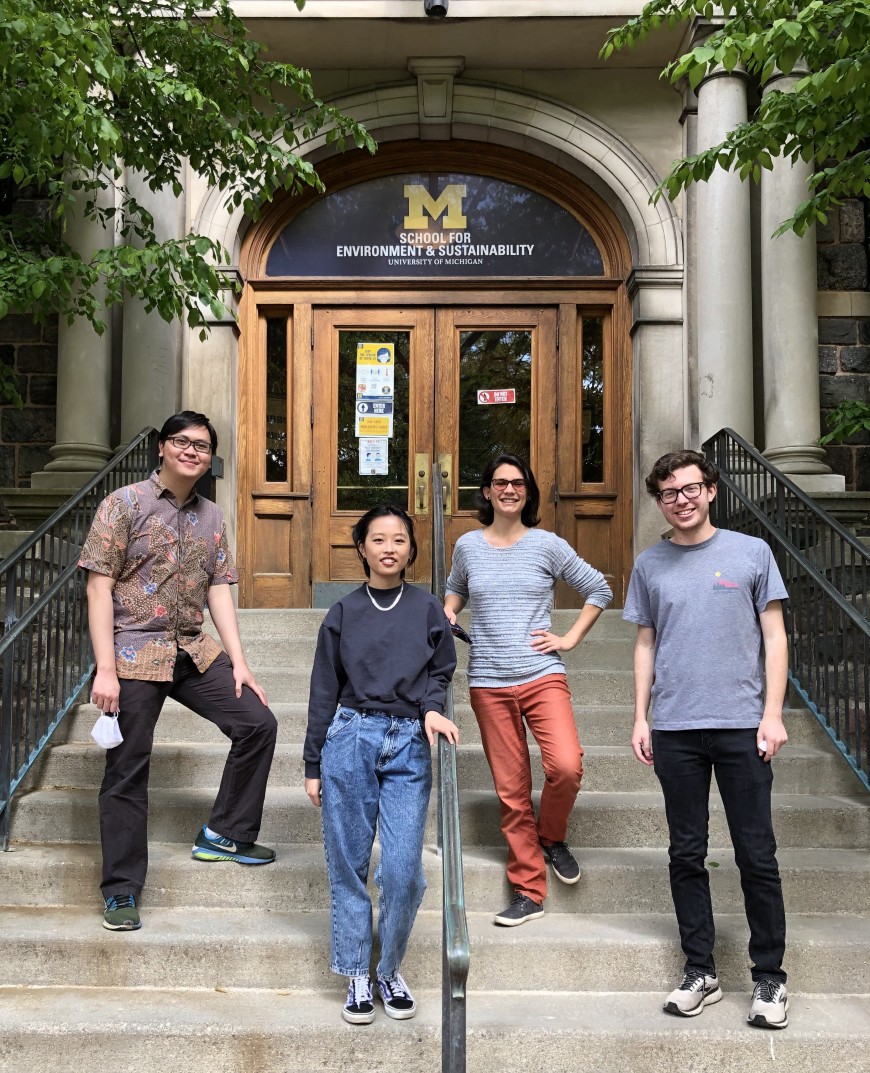 As a kid, SEAS alum Ryan Horwitz (BS ’19, MS ’21) loved spending time outdoors. One of his earliest and fondest memories is the time he spent playing and running around in the wilderness at his grandparents’ cabin. Early on, he was obsessed with rocks, and, as he grew, so did his impressive collection. Eventually, though, his interests shifted to other organisms. “Not that rocks aren’t cool, because they are! But I started to grow more interested in things that are alive and have a bit more personality,” Horwitz said of his evolving interests.

Horwitz’s love for animals eventually became a part of his career pursuits. He studied earth and environmental science, geology, and Spanish as an undergrad at U-M, then honed in on animals when he started pursuing an MS at SEAS. “It turned out that SEAS is the perfect place to learn about wildlife,” said Horwitz. In 2019, Horwitz began his studies at SEAS in Geospatial Data Sciences with a focus on wildlife. The field of geospatial data sciences prepares students to develop and use analytical and computer-intensive data-science methods to assess landscapes and natural resources to achieve sustainability. It’s at this point that Horwitz was matched with Rebecca Hardin, SEAS Associate Professor of Environmental Justice, as an advisor.

Hardin led Horwitz and three other students, the group dubbed “WILD RHINOS,” on a project that would lead Horwitz down a serendipitous career path. “The client we got to work with was Kate Brooks, a war photographer who, in 2017, released a documentary film called ‘The Last Animals.’ The film documents the consequences of the ivory trade, which shockingly continues to kill thousands of animals and rangers every year,” Horwitz said.

The film has had a significant impact, not only collecting accolades and awards as it toured the film festival circuits but eventually growing into The Last Animals Foundation. As a nonprofit organization, the foundation works to raise awareness about wildlife trafficking and the collapse of biodiversity and aims to protect animals from extinction and create a more sustainable planet. A piece of this work is to support frontline park rangers who guard critically important populations of wildlife. Hardin is one of a team of five who work on this foundation.

Through his work with Hardin and Brooks, Horwitz was introduced to Sam Wasser, a University of Washington Biology Professor. Wasser has worked for decades on understanding illegal trade patterns and also made an appearance in ‘The Last Animals’ film. Much of Wasser’s work has focused on using DNA to track the origins of ivory seizures, so when Horwitz met Wasser, he had decided to propose some ideas of things they could work on, and one of those ideas happened to align closely with what Wasser had been hoping to achieve. “The idea I proposed involved network analysis, which happened to be along the lines of what he was looking to do, and I was lucky because Kate and Rebecca gave me a lot of leeway with my time, so I ended up splitting my time between working with Sam and also working with Kate.”

Horwitz joined Wasser on a study that aimed to understand how elephant genotypes could be used to reveal the size and connectivity of transnational ivory traffickers. The resulting paper, “Elephant genotypes reveal the size and connectivity of transnational ivory traffickers,” was published in February 2022 in Nature Human Behaviour. The study found that genetic testing of tusks can be used to identify familial relationships between elephants across ivory seizures. This genetic matching of tusks in separate shipments of ivory can shed light on the structure and connectivity of the Transnational Criminal Organizations (TCOs) that drive the illicit poaching and trade of elephant ivory. The study’s findings indicate that these TCOs are large, linked to multiple shipments of ivory, and highly interconnected.

Horwitz contributed to the publication by creating all the figures to present the data and by analyzing network structures. “The visualizations were particularly important, both for us on the research team, and for readers to understand the impact that these genetic revelations can have on stopping the illegal trade of ivory,” said Horwitz.

The completion of the study and its publication is the culmination of Horwitz’s master’s project. But the good news doesn’t stop there. Since his graduation in 2021, Horwitz was hired by Wasser to work in the newly formed Center for Environmental Forensic Science at the University of Washington. In his role as Research Scientist, Horwitz is expanding on his data analysis and visualization work. “It has been so inspiring to work with people who are interested in putting a stop to a big issue, and I feel lucky to be able to continue the work that I started at SEAS,” said Horwitz.

When asked to reflect on his experience at SEAS and the impact it has had on his career path, Horwitz says that the support system was incredible. “I couldn’t have done anything without the WILD RHINOS group. We supported each other and grew together and had a great experience under Rebecca’s leadership. She is the greatest advisor you could ever have, and she introduced me to Kate and Sam and gave me this huge opportunity to be a contributing author on a big, multi-national and multi-institutional collaboration between scientists.”