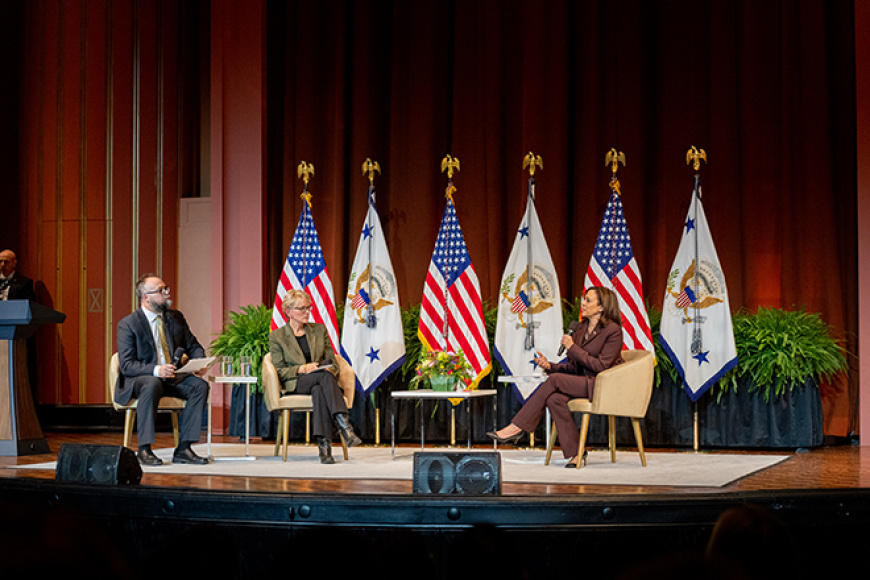 During a University of Michigan visit to promote the Biden-Harris Administration’s efforts to address climate change—which include the passage of the Inflation Reduction Act, the Bipartisan Infrastructure Law and the CHIPS and Science Act—Vice President Kamala Harris told the packed crowd that “we are modeling some of the best of what innovation looks like at this moment.

“I’m really excited about it,” she said. “We should take note of the momentum we have achieved. Our responsibility now is to lead and not waste a minute, because we don’t have a minute to spare.”

The vice president shared her thoughts on the climate crisis during a Q&A session moderated by Department of Energy Secretary Jennifer Granholm and Kyle Whyte, the George Willis Pack Professor at U-M’s School for Environment and Sustainability (SEAS) and a member of the White House Environmental Justice Advisory Council.

The invite-only event was held January 12 in Rackham Auditorium and included U-M students, faculty and staff, as well as community leaders.

Before introducing Harris and Whyte, Granholm, a former governor of Michigan, called attention to the historic investment in electric vehicle and battery manufacturing in Michigan. She cited a new study from SEAS researchers in the Center for Sustainable Systems that found that 90% of American households that switch to electric vehicles could save $600 or more annually on transportation costs. Jesse Vega-Perkins, who graduated from SEAS in 2022, is the lead author of the study and completed the research while she was a master’s student at the school.

Whyte, who specializes in environmental justice and is an enrolled member of the Citizen Potawatomi Nation, noted that he has “devoted his career to uplifting Indigenous solutions to climate change.” When he asked how Harris’ life experiences have shaped her approach to addressing climate work, she replied that her administration’s efforts have been “fueled by the importance of equity,” which differs from equality in that it “takes into account that not everybody starts out on the same base.”

Noting that climate change intersects with other areas, including public health, maternal health and education, the vice president said the work of climate adaptation and resilience must include “paying attention to the public health outcomes that disproportionately impact low-income communities and communities of color. Those intersections must always be at the center of the communities that are directly impacted.”

As vice president, Harris said she has had conversations with world leaders about the “interdependence and interconnection between nations” on climate change issues, and that the U.S. has a responsibility to ensure equitable climate outcomes beyond its borders.

When asked by Granholm which technology she is most excited about, Harris replied, “I love electric school buses.” Noting that “25 million children in America go to school on diesel-fueled buses,” whose toxic fuels also affect bus drivers, teachers and others in the educational ecosystem, Harris said electric school buses are just one example of new industries being created for our clean energy economy.

Shifting the talk toward students, Whyte inquired about some of the ways young people can get involved in climate action. “Anything you are doing now in terms of your studies or your passions connects to this issue,” Harris said. “You can do it through your studies, through activism, through talking to your friends and relatives on social media to help them get excited about all the opportunities that are going to open up in the midst of this crisis.”

In closing, the vice president told the audience that the climate movement correlates to other societal movements​​—including LGBTQ rights, the issue of bodily autonomy, and civil and voting rights.

She asked audience members “to rededicate themselves to communities and fights and movements that seemingly have nothing in common, but have everything in common.

“One of the most powerful things we can do is build coalitions to remind people that they are not alone and that we are in this together,” Harris added. “Let's seize this opportunity. It’s fun to do this work.”