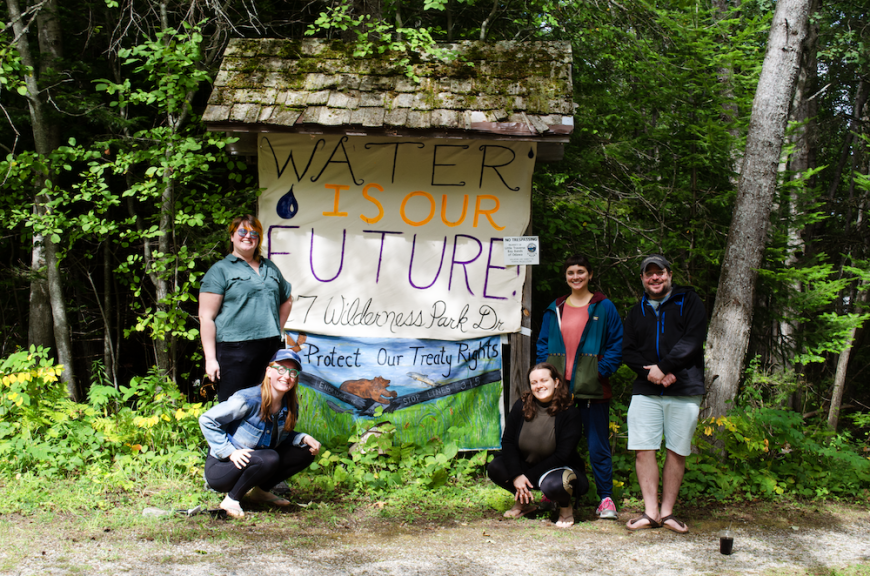 A team of students at the University of Michigan School for Environment and Sustainability (SEAS) has collaborated with the Anishinaabek Caucus to produce a video that highlights concerns regarding the Enbridge Line 5 pipeline, which moves petroleum from western to eastern Canada via the Great Lakes states. In the video, tribal leaders and Native community members share the ways that Line 5 harms Native communities and how a future with clean energy is possible and essential. This video is just one piece of the team’s capstone project, which is a requirement for SEAS graduate students that offers an opportunity to work on an external client’s real-world sustainability challenge.

To produce the video, the project team, alongside SEAS Professor and project advisor Kyle Whyte, who is also a member of the Anishinaabek Caucus, engaged with Caucus representatives to design the project and ensure that their needs and wishes were met. “Rather than coming to the Caucus with preconceived notions around what we should do for them as a student team, we entered into a series of dialogues to co-create the scope of our project. Out of that collaborative process came the idea for a multimedia representation of an alternative vision for Michigan’s energy and water future that centered the cosmology, philosophy, knowledge, and perspectives of local Indigenous and Native peoples. From there, we worked with the Caucus chair, Andrea Pierce, and videographer, Steve Gute, to make the video a reality,” says Erin Posas, who is specializing in Environmental Justice at SEAS.

The Line 5 Pipeline is notable for passing under the environmentally sensitive Straits of Mackinac, which connect Lake Michigan to Lake Huron. Since Enbridge has proposed building a replacement tunnel that would be completed in 2028 at the earliest, the Caucus is advocating for a cleaner and safer energy future. “Line 5 is a threat to Michigan and its citizens and the sovereign nations that live here,” says Pierce. “It was an honor to work with the SEAS students, who are highly intelligent and caring and brought a different view to the Line 5 issue.”

For the students, a major goal of this video was to demonstrate that Line 5 is incompatible with an Indigenous vision for the future. “The video centers Indigenous perspective and conveys a future vision as told directly by Anishinaabe leaders. In doing so, we aim to help the general public understand that Line 5 threatens Indigenous lifeways that make up their livelihoods, spirituality, culture, and well-being,” says Jessica Berger, who is also specializing in Environmental Justice at SEAS. “It was essential that this story was genuine and did not distort or misrepresent Indigenous perspectives, especially since our team is not Indigenous. To ensure authenticity, we worked with Dr. Whyte and Pierce of the Anishinaabek Caucus.”

When asked how this project and her studies at SEAS thus far have impacted her, Bree Prehn, who is specializing in Environmental Justice says, “I was lucky enough to take Kyle Whyte’s Indigenous Sustainability and Environmental Justice course my first semester at SEAS, and it frankly shifted my entire worldview. I left that class inspired to shift my career goals from more top-down policy work to grassroots, frontline activism work. M’Lis Bartlett’s Science and Practice of Social Change the same semester was also hugely inspiring. It helped me contextualize my skills from my old career in IT project management as boundary-spanning and capacity-building skills. But by far the best part of my studies so far has been building a community with my fellow students.”

Another project team member, Hans Leisman, who is specializing in Environmental Policy and Planning, adds, “Studying at SEAS has taught me a new way of thinking. At SEAS we learn to evaluate policies and problems from economic, ecological, and environmental justice perspectives. I have learned to embrace collaborating with my classmates on homework and the value of multiple brains breaking down an issue.” Sofia Da Silva, who is studying Environmental Justice, says, “I feel incredibly fortunate to have taken classes that have not only furthered my knowledge of environmental justice but have fundamentally shifted my worldview on what this work means. I have appreciated how professors and my fellow students have pushed me to think more critically and expansively.”