Student delegation weighs in on COP26 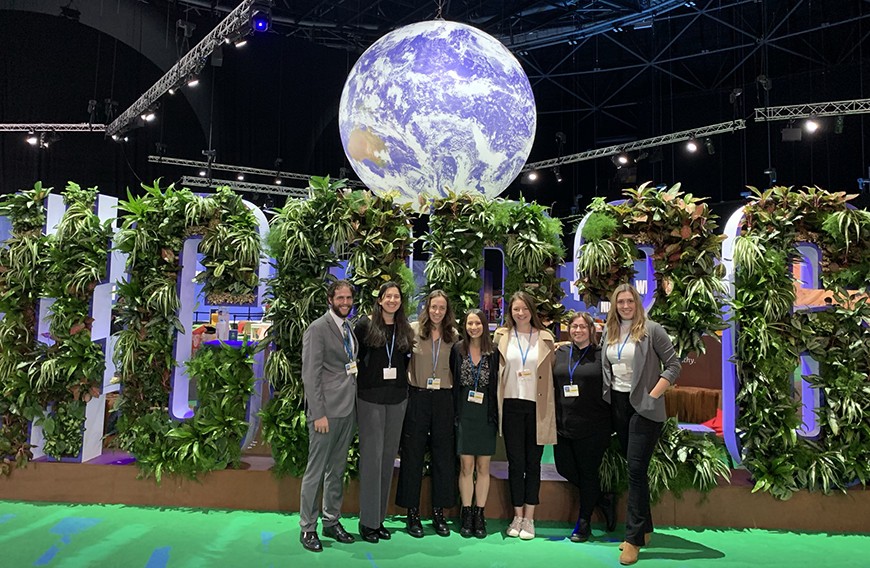 Thirteen University of Michigan graduate students and their faculty adviser, Avik Basu, attended the recent COP26 climate summit in Glasgow, Scotland. The students observed the negotiations, attended side events and interacted with various experts. Several members of the delegation share their perspectives and experiences.

Muhammad Abdullah is a 3rd year PhD student at the Mechanical Engineering Department and is enthusiastic about clean energy resources, particularly for the transportation sector. He is also earning his master's in Sustainable Systems from SEAS. At COP26, Abdullah looked forward to experiencing the dynamics of international dialogues and how global cooperation can be achieved to make the planet earth greener for existing and future generations.

"The COP26 experience was quite amazing with a lot of opportunities to connect and learn from various groups. Although the hope was to achieve a consensus on a few concrete goals, the hesitation and lack of equity in the resources for this transition to net-zero is also understandable. Even then we saw some agreements, such as stopping deforestation by 2030, cutting methane emissions by 30% by 2030, which is quite hopeful and maybe by next year, we'll see more progress. What I appreciated the most was the willingness by the international agencies to offer and provide support for building resiliency and making nations self-reliant in developing plans to curb GHG emissions."

Lauren Balotin is a dual degree graduate student pursuing an MPH in Environmental Health Promotion & Policy and an MS in Environment & Sustainability. During her time at U-M, Lauren interned with the United Nations Framework Convention on Climate Change in its Adaptation division, and she worked with the Washtenaw County Board of Commissioners on its forthcoming climate action plan. She is most interested in working with developing countries to adapt to the health impacts of climate change.

U.S. Role at COP26:
"I first attended the UN climate negotiations at COP23, just a few months after the U.S. announced that it would withdraw from the Paris Agreement. It was clear that this decision affected the trajectory of the negotiations, as other Parties reacted, and subnational U.S. leaders had to step up in the absence of a national climate commitment. As one of the biggest greenhouse gas emitters, the U.S. will need to do a lot more than simply re-joining the Paris Agreement, but it’s at least a step in the right direction. I’m hopeful for national climate action going forward, especially in light of the new agreement between the U.S. and China to cooperate on climate action."

Overall COP26 Outcomes:
"There were many disappointments at COP26: the low level of inclusivity for marginalized groups at the negotiating table, the lack of transparency for observers, and the decision to not call for a complete phase out of coal, among others. While these are frustrating, there are also reasons to feel hopeful. Parties did ultimately come to an agreement, and there were new commitments for climate action, including a bilateral partnership between the U.S. and China. For me, the real question is whether the world will follow through with these commitments going forward."

Community at COP26:
"One of my favorite parts of being at COP26 was being surrounded by others who care about climate change and learning from all the activists taking inspiring steps for climate action. While observers were somewhat detached from the actual negotiations, there was no shortage of opportunities to meet and learn from the other delegates around me. It was an opportunity to remember that while international policy decisions will frame climate action, community activists can also play a role in pressuring policymakers and engaging in local action."

Climate Change & Public Health:
"As a dual degree student in SEAS and the School of Public Health, I’m most interested in the health impacts of climate change and helping communities adapt to these impacts. I believe climate change is one of the biggest public health crises of our generation. One of my favorite events from COP26 took place at the World Health Organization (WHO) Pavilion, where local activists discussed their personal experiences with the mental health impacts of climate change. One of the findings from my UN Climate Change internship project was that mental health impacts are not being discussed nearly as often as physical health impacts, so this was an important reminder that much more needs to be done in this space going forward."

Chelsea Johnson is a second year master’s student at SEAS with dual specializations in Environmental Justice and Sustainability and Development. Her research focuses on climate adaptation, sustainable development, poverty alleviation, and food security. At COP26, Chelsea looked forward to learning and observing how climate negotiations are conducted and climate adaptation policies are implemented in lower and middle income countries.

"Attending COP26 was a very impactful experience for my master’s degree education. I was able to network and attend events on topics of interest and was surrounded by industry leaders. I had never been around that many people who were all passionate about the same things that I am.  It was really great to be able to watch US leaders make climate commitments and hear them speak in person. I watched John Kerry, the Special Envoy for Climate, announce that the US would be making its first financial contribution to international climate adaptation. I also watched Pete Buttigieg, Secretary of Transportation, announce that the US has plans to go to net zero in the aviation industry by 2050.

"However, there were some disappointments.  At the conference I was interested in attending events and negotiations that we're related to justice, poverty alleviation, food security and gender and how these were going to be placed into the core of the climate commitments. However, in my opinion there were events on this issue but they were limited. Additionally, this year NGO observers were not allowed to go to coordination meetings or negations between countries. This was disappointing because I was looking forward to observing how these negotiations took place. Observers were allowed to attend informal stocktaking where country delegates and the COP presidency announced what had taken place during the negotiations thus far. In conclusion, the agreement that was finalized does not lead to a 1.5 degree world but does signify a shift in climate negotiations with recognition of more climate adaptation finance is needed and the phasing down of fossil fuels."

Peter Siciliano is a dual-degree student at SEAS and the School of Education, focusing on environmental psychology, human learning, and judgement and decision-making in the sustainability sphere. He is most interested in how science communication is accepted and/or discounted by the general public, as well as the environmental stressors that can affect how people perceive and interpret new information.

"What impacted me most about COP26 is how close we are to reaching widespread implementation of the Paris Agreement, yet how far we seem from all being on the same page. Small island developing states face climate impacts far beyond the rest of the world, yet are doing far more to implement climate adaptation and GHG emissions goals (with far less resources) than many developed nations. Additionally, the issues inherent in climate funding (and the unwillingness of many developed nations to contribute) continue to hamper further agreements. As in the past, those that have the most to lose are doing the most to prevent climate change from continuing unabated - a common thread in climate negotiations it seems. We have certainly made progress, but there is more work to be done.

"It was extremely beneficial to attend in person and see it all happening in front of us. I attended COP15 in Copenhagen when I was in undergrad, but being so young, there was so much that I did not understand nor grasp at the time (not to mention the controversies that ended up coming out of the conference that year). This look into where we are these days is far more encouraging, yet it seems that many of the same issues are still being debated: indigenous representation, equity in climate financing, access for conference observers, and many others. COP is a very inspiring thing, and I am glad that world leaders are still gathering and negotiating about climate issues - we simply still have a long way to go. Nevertheless, I am very thankful to have attended, and am hopeful that we will arrive where we need to at some point in the near future given the continued work and advocacy of developing nations."

If you were a member of the COP26 Student Delegation and would like to share your perspectives, we're happy to add them - along with your photo - to this page. Contact sprangdm@umich.edu by November 29.