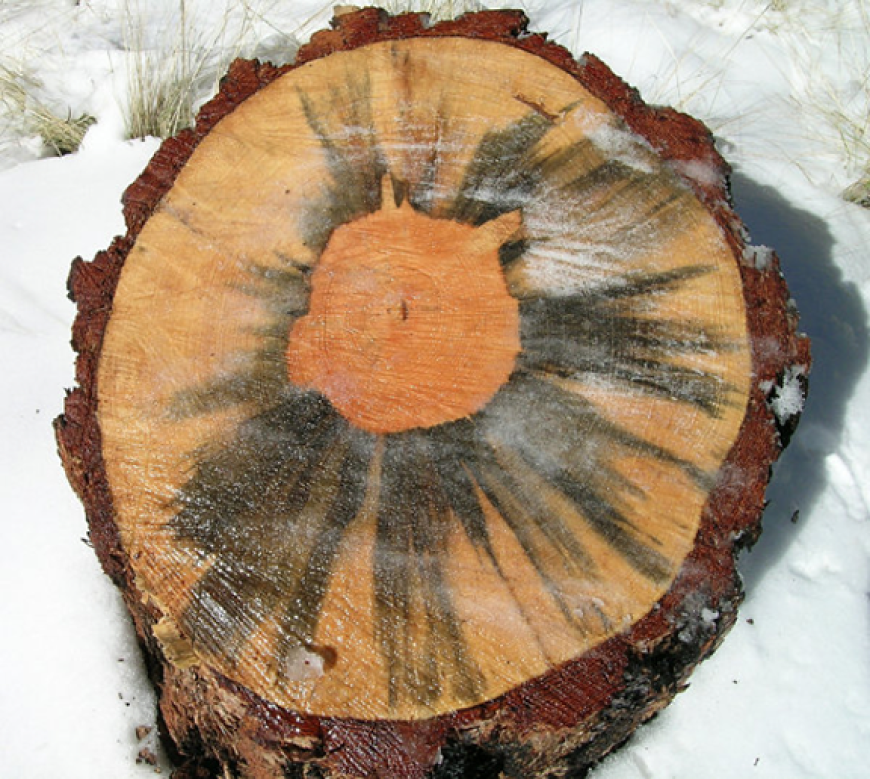 A recent paper comparing blue stain pine processed using thermal modification (TM) instead of a conventional chemical treatment method demonstrates the environmental benefits of TM by extending the life of the lumber for applications such as decking. The blue stain on pine is caused by a fungi transmitted by mountain pine beetles.

University of Michigan School for Environment and Sustainability (SEAS) researchers Geoffrey Lewis, Gregory Keoleian and Ivan Eastin co-authored the study, “Life cycle carbon accounting of thermally modified wood in the US inland northwest,” which appears in the journal ACS Sustainable Chemistry & Engineering. The research was funded by the U.S. Department of Agriculture.

Below, Keoleian, Lewis and Eastin answer four questions about the study, including how the thermal modification process differs from other wood treatment methods.

1. What causes a beetle infestation in trees, and what is its effect on pine trees?

Across the U.S. West, the number of dead trees is increasing at an unprecedented rate across a wide area. The Rocky Mountains area in western Canada and the United States has seen nearly 70,000 square miles of forest die since 2000. For the most part, this massive die-off has been caused by outbreaks of tree-killing insects ranging from the Ips beetle in the southwestern U.S. that has killed pinyon pine to the mountain pine beetle that has devastated forests in the inland Northwest. These large-scale forest die-offs from beetle infestations are likely a symptom of a larger problem: warming temperatures and increased stress due to a changing climate. A combination of a longer growing season and declining precipitation translates into drought conditions in interior western forests that stresses the trees and makes them more susceptible to beetle infestations. Fewer cold winters also reduce natural die-off of the beetles.

The mountain pine beetle is the most aggressive, persistent and destructive bark beetle in the western United States and Canada. Female beetles initially prefer large diameter trees until they are depleted from the forest.

Mountain pine beetles develop in pines, particularly ponderosa, lodgepole, Scotch and limber pine. The mountain pine beetles (and other bark beetles) transmit blue stain fungi. The beetle carries the spores of the fungus on its body and they are deposited as it chews through the bark and phloem during attack. Fungi grow within the tree and assist the beetle in killing the tree, and the fungi give a blue-gray appearance to the sapwood.

2. What research question did you set out to answer, and what methods did you use to answer it?
The goal of this project was to calculate a gate-to-gate life cycle inventory of the Thermal Modification (TM) process for the first TM facility in the western United States (in Polson, Montana).

We also explored a broader scope that includes forestry operations, lumber production, and use phase impacts, as well as a discussion of the greenhouse gas impacts of end-of-life options. A case study of TM and conventional options in siding and decking applications is included, using literature data for forestry operations, lumber production, and surface treatments.

3. What is the thermal modification (TM) process and how is it different from other wood treating methods?

The TM  process, which is different from traditional kiln drying, uses elevated temperatures and pressures to improve the physical and mechanical properties of the wood. The TM process imparts a range of advantageous properties to wood, including an attractive dark color; drastically reduced water absorption; improved dimensional stability; reduction in hemicelluloses (sugars), which provides increased durability against rot and insect attack; and the elimination of many volatile organic compounds, which may improve the fire resistance of the wood. TM wood is particularly well-suited for use in exterior applications such as decking and siding.

Lumber was previously treated with chromated copper arsenate (CCA) to resist rot, but CCA has been replaced with other preservatives due to arsenic leaching. For residential construction applications (e.g., decking and cladding), replacements include alkaline copper quaternary (ACQ), copper azole, and their derivatives but these treatments do not perform as well in ground-contact applications. The TM process is expected to outperform these treatments and also imparts a darker color to the wood and addresses a concern about the blue stain color. Blue-stained pine, while structurally sound, is discounted substantially in the marketplace, where it is widely perceived to be low quality. While this is largely due to the aesthetics of the lumber, many users shun blue-stained lumber based on the (mistaken) perception that it has lower strength.

We note also, however, that the blue stain can be very desirable to certain applications such as furniture.

4. In lay language, what are the most important findings of your paper, and how did they go beyond previous studies of this topic?

Results show that GHG emissions for the TM process (excluding carbon uptake in trees) are 0.75 kg CO2e/board foot (BF) (state average electricity grid) and 0.49 kg CO2e/BF(all-renewables electricity). For reference about 0.4 kg CO2e are emitted from one mile of driving. These TM process related emissions are in addition to the forestry and harvesting related emissions as well as other manufacturing emissions that are common with conventional lumber production. So, the TM lumber is more carbon intensive on a BF basis but there are other advantages.

The TM process has been proposed as a way to restore value to blue-stained beetle-killed pine in the inland mountain west. From a GHG perspective, the harvest of this material makes use of the carbon pulled from the atmosphere by the growing trees and stores a sizable fraction of it in durable products. This is a desirable alternative to that carbon returning to the atmosphere via forest fire or decay. The longer-lived a durable product is, the longer that carbon stays out of the atmosphere and the less frequently that product needs to be replaced (and generate another set of production emissions).  Burning a board foot of pine would release about 2.02 kg of CO2e into the atmosphere so converting the pine to TM lumber and avoiding its destruction in a wildfire can result in carbon benefit of the TM process is between 1.27 and 1.5 kg CO2e/BF (depending on the electricity source).

We developed a new framework to compare alternative lumber products across their entire life cycle from forestry and harvesting, processing, use, maintenance (e.g., painting), and end-of-life management. This framework enables the sustainability performance of products that have different service lives.  We conducted two case studies comparing TM processed blue stain pine with conventionally treated lumber for decking and siding applications. These case studies  illustrated the benefit of TM wood not requiring maintenance in use, so the impacts associated with producing paints and stains are eliminated. We did find, however, in our hypothetical scenarios that the GHG burden from the TM process was slightly greater than the burden from conventional product coatings for the chosen examples and lifetimes. If the avoided impacts from blue stain forests were included in the analysis, the blue stain products would have lower carbon footprints compared to conventional lumber products. Using cost as a metric would also likely produce a favorable total life cycle cost (in dollars) due to the significant labor involved in maintenance of the conventional products.