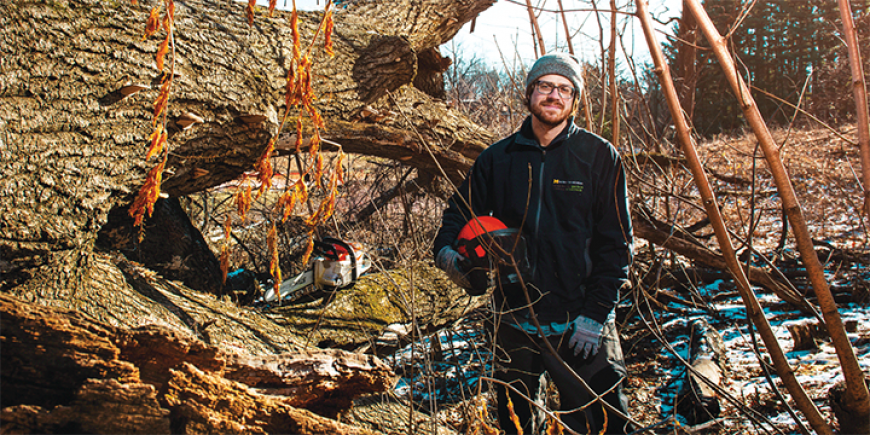 If you’re out walking through the woods on a sunny, wet afternoon, you might notice some pretty leaves or clusters of wildflowers. But when Chad Machinski (BS ’14) strolls through Nichols Arboretum, he not only knows the name of all the plants, trees, and insects he sees, but he also understands the intricate ways they are connected. “Over there is an Eastern redbud tree. There’s a pignut hickory, with the low yellow leaves. Just beyond it, that smaller green tree with big leaves is an umbrella magnolia. That’s a royal fern, and that’s black raspberry. There’s bee balm, and snake root. I could keep going,” he says with a shrug and laughs.

Machinski works as a caretaker at Nichols Arboretum, fondly known as “the Arb,” and is an alum of the University of Michigan Program in the Environment (PiTE), an undergraduate interdisciplinary program between U-M's College of Literature, Science and the Arts (LSA) and the School for Environment and Sustainability (SEAS). A current SEAS master's student, he lives in a cottage on the southern edge of the park and tends to its 123 acres 10 hours a week. He clears leaves from benches and boardwalks, shovels sidewalks in winter, facilitates volunteer workdays, removes fallen trees that block trails, and cuts down invasive species, all right outside his front door.

Machinski also cares for the Arb’s plants and trees, cultivating an environment in which they will thrive. “There’re some oak tree saplings, about 15 feet tall, that I have high hopes for. I take a lot of pride in developing a really nice tree form,” he says. “I like to believe I’ve set them up for a good future. I look at them now and think, ‘That’s going to be a good tree.’”

This is Machinski’s first year as caretaker, but his roots working with plants reach back to his LSA undergraduate days. He started working at the Matthaei Botanical Gardens in 2012, first in facilities and then in horticulture. He stayed until he graduated and then for two summers after. “I went there for the first time for an exotic plant sale and knew I had to get involved.”

Ecology classes in PiTE also got Machinski into nature—literally. “I had class in a river,” he says. “We had to make a collection of insects found in the area, which meant we had to find and identify them.” Machinski started spending evenings in the lab, where he looked at bugs under a microscope and cross-referenced them with pictures in his textbooks. “I thought it was the best thing.”

Machinski worked as an arborist for two years in California and, when he returned to Michigan, became the woody plants and trails technician at the Arb, a job that had been seasonal but became a year-round position in 2020 with the onset of COVID-19. That summer, Machinski was inspired to apply to a master’s program in SEAS, where he recently finished his second year, focusing on rare plant conservation and living collections. When he became a graduate student, he also became eligible to work as a caretaker.

Machinski has a longstanding connection to the Arb, and living there has reinforced it as well as the methods he first learned as an undergraduate. “With native plant identification, you can’t just take a class and retain information. You have to work with it. Here, I can continually practice,” he says. “You can learn about conservation, but if you don’t have your hands in the dirt touching plants, are you really learning it?”

For the Love of Plants

Ask Machinski about his favorite plant and he beams. “That’s very difficult,” he says, “and I have a lot of qualifiers. My favorite tree species is the Eastern tamarack, a needleleaf tree. In the fall, it turns a beautiful bright gold.”

His favorite herbaceous species is the boneset, found in wetland areas. “It’s got a stem that passes through the center of the leaves,” he describes. “It’s fuzzy and produces teeny white flowers that wasps go wild for in the summer.”

Machinski also loves penstemons, commonly called beardtongues. “They have a neat tubular flower. It’s so funny to watch bumblebees crawl inside and hang out.”

Machinski’s love for plants also stems from their symbiotic connection to the insects and birds that rely on them, especially given the urgent climate and biodiversity crisis. “We’re losing species. Michigan has a long list of plants of special concern, threatened, or endangered,” he says. “And it’s a really long list.”

Conservation, he says, is all about nurturing a wide variety of plants that can provide food for many different insect species. “For a lot of people, if they see a creature eating plants in their garden, they get upset. But that’s kind of the point,” he says. “Flowers and plants aren’t just valuable for their aesthetic quality. Part of their aesthetic quality is what they provide to the rest of nature.”

He’s quick to add that conservation isn’t reserved for ecologists at large-scale arboretums. “People can make differences in their own yards. Planting native plants attracts native insects, which attract birds. It adds up.”

This is why Machinski loves the Arb: It’s a beloved public space where visitors have boundless opportunities to learn and become inspired. His favorite place in the Arb is the Dow Prairie, a more than 30-acre expanse on its eastern edge that is dense with big bluestem—a species of tall grass—and a high-level of plant diversity. “I prefer it on gloomier days,” he says. “The dark sky with the colors of the grass is such a scene. I’m never just looking at the prairie,” he adds. “I’m looking at everything that makes it the prairie.”

This article originally appeared in the Summer 2022 issue of LSA Magazine.