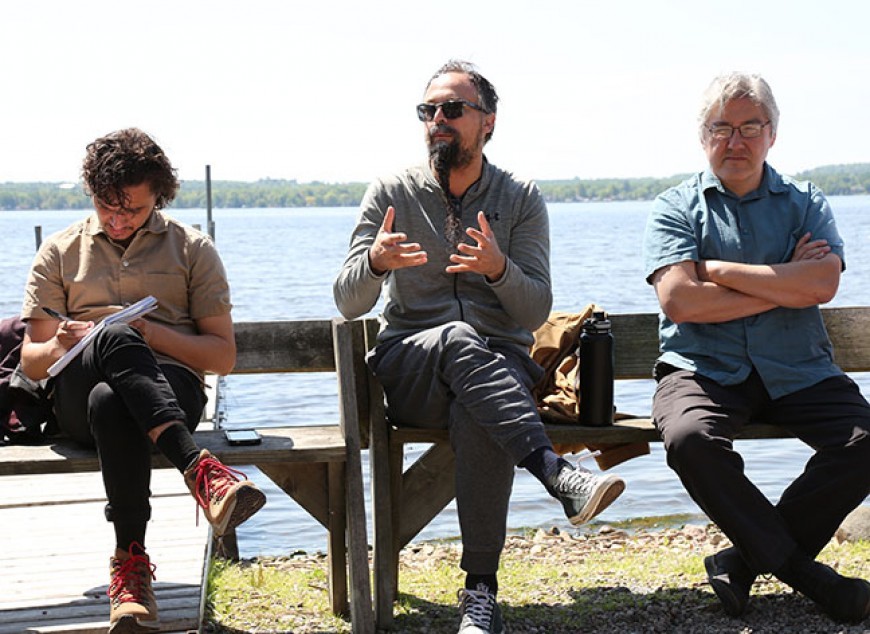 This article originally was published by U-M Federal Relations.

We are proud to feature U-M faculty who volunteer their personal time in service to the nation. These engaged scholars serve on Federal Advisory Committees (FACs), Intergovernmental Personnel Agreements (IPAs), or on National Academy committees. These faculty and staff live out U-M’s mission to serve the state, nation, and world by applying their knowledge and expertise to help shape and inform national policy.

What agency/advisory committee are you serving on? How did you get appointed to the committee, and what is your term of service?
I serve on the White House Environmental Justice Advisory Council. I received the appointment based on my perspective on environmental justice issues, given my work is on Indigenous environmental justice issues, especially relating to climate change. I have a three-year term, which started March 26, 2021.

How did you learn about this opportunity and what factors made you decide to serve?
I was contacted in March 2021 by the Council on Environmental Quality, the agency that facilitates the council.

Please explain your role and/or a specific issue that you work on.
The council was initially given three charges in terms of issues that we had to make recommendations on. The first charge was to issue new ideas for how to improve federal policy on environmental justice, especially making improvements on Executive Order 12898 from 1994 “Federal Actions to Address Environmental Justice in Minority Populations and Low-Income Populations.” The second charge was to make recommendations on one of the new programs advanced by the Biden/Harris administration in Executive Order 14008, called the Justice40 Initiative. Justice40 is a requirement of most federal agencies regarding how they implement major investments in key infrastructure areas, including clean water infrastructure, renewable energy, and climate resilient infrastructure. Agencies must ensure that at least 40% of the benefits of such investments flow directly to disadvantaged communities, which often include diverse Black, Brown, Indigenous, and low-income communities. The third charge was to make recommendations on the resource allocation tool for identifying what communities face disadvantages, and hence should be recipients of Justice40 benefits. The tool is called the Climate and Economic Justice Screening Tool. There is a working group formed for each of these charges made up to 12 council members each. Currently, there have been additional charges and working groups, including charges to make recommendations on a scorecard to evaluate federal agencies progress on improving environmental justice, on federal approaches to environmental justice and climate resilience, and federal agencies relationships with Indigenous peoples.

What is the time commitment to serving on the committee? Is your experience on the committee what you expected? Please explain.
Compared to other federal advisory committee processes I’ve been part of in the past, this is a high-intensity committee in terms of workload. Each week there are weekly meetings and the public meetings, held every several months, are two days long, and can last many hours. The charges have had tight deadlines, and require a lot of hours of research and collaborative writing. Given that our recommendations are literally attempting to change administrative culture and change how billions of dollars of federal investments are spent, there is a lot of national attention and pressure on this council. Our council is literally trying to rapidly find ways to change the direction of generations of history in which U.S. federal governments and states have left many communities behind when they have invested in infrastructure and engaged in permitted processes for major industries.

How has your research experience and expertise brought value to the committee?
I have devoted my career to understanding how Indigenous peoples face higher risks from climate change than many other populations. I have shown how Indigenous vulnerability has much more to do with issues of law, policy, government accountability, and social and cultural discrimination, than it does with Indigenous peoples simply being in the wrong place at the wrong time in terms of where climate change impacts hit hardest. I have studied Indigenous solutions to climate change, and key policy, legal, and educational changes that can make improvements for Indigenous peoples to have more control over how they make plans to respond to climate change or launch their own renewable energy programs. I have studied environmental justice, both involving Indigenous peoples and other communities, for nearly 20 years, and have designed numerous policies, educational programs, studies, conferences and workshops, and reports on issues at the intersection of climate change, environmental justice, and Indigenous peoples. I am currently the coordinator of the environmental justice M.S. specialization at U-M's School for Environment and Sustainability. The specialization is part of the legacy of emeritus Professor Bunyan Bryant, who was the first Black faculty member at the University of Michigan, and developed an inspiring curriculum and approach to environmental justice that empowered students to pursue careers as change-makers. I am also serving on another federal advisory process for the U.S. Global Change Research Program. I am a lead chapter author on the 5th National Climate Assessment for the chapter on "Tribes and Indigenous Peoples." I am also an author on the "Human Social Systems" chapter of the same report. The report is at its early stages, and I just finished hosting a public comment meeting on our chapter in January. This is the third time I have served as an author on a major U.S. Global Change Research Program report. The National Climate Assessment plays a major role in advising government and other stakeholders on what climate change risks the U.S. and Tribal nations are facing.

Would you recommend that your colleagues seek out similar opportunities? How do you think this experience will strengthen your career or ability to be successful in the future?
For Michigan colleagues who work at the intersection of research and policy, serving on federal advisory committees can lead to a lot of meaningful change. I previously served on the Department of Interior’s Advisory Committee on Climate and Natural Resource Science, I still see many of our recommendations and reports being used meaningfully in how the federal government delivers climate services. Advisory committees are an important opportunity to both meet and work with key people that we might not typically have the opportunity to work so closely with, and to learn in more detail how particular administrations are running the government. Though for advisory committees that are in the public eye, faculty do need to be ready for the pressures of being accountable to the communities most affected by the issues being considered by the advisory committee.