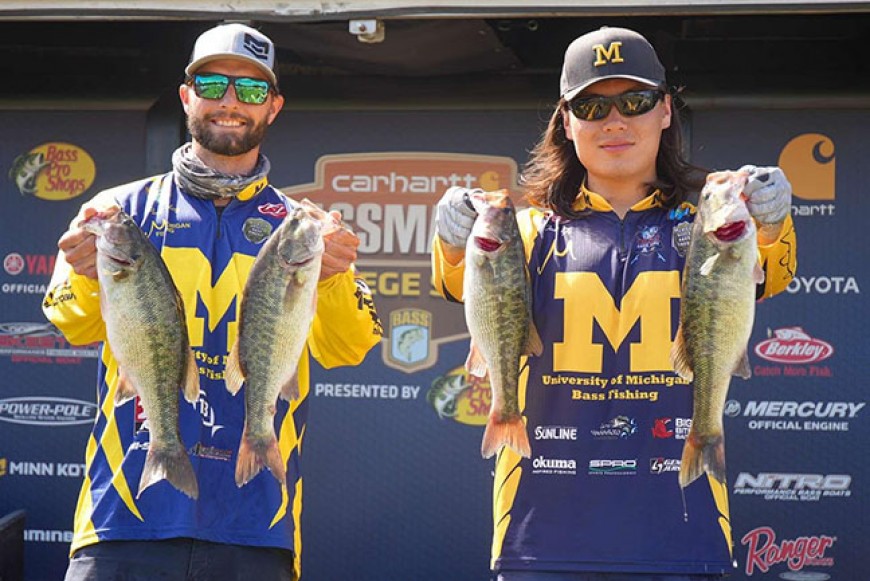 The University of Michigan Fishing Team is heading to the Bassmaster College Series National Championship, to take place later this year. Team members Paul Tabisz (U-M senior, anthropology) and James Ge (U-M junior, neuroscience), who competed on behalf of U-M during a recent collegiate tournament on Lewis Smith Lake in northern Alabama, came fifth out of almost 200 teams during the two-day competition, earning a place in the national championship.

Fishing tournaments require tremendous skill, technique, and patience. Anglers, usually in teams of two, compete based on the combined weight of five live fish of the targeted species. Only five fish are allowed to be weighed by a team each day, so the competitors must make snap decisions about which fish to keep and which to release. After the fish are weighed and judged, they are released back into the lake unharmed.

During the Alabama tournament, Tabisz and Ge targeted spotted bass during an eight-hour day over a two-day period. The first day, the team scored second place with a combined weight of 14 pounds, 8 ounces for five fish. The second day, the combined weight was 10 pounds, 4 ounces, for a two-day combined weight of 24 pounds, 12 ounces. This showing put them in the second percentile, or fifth place. Only elite teams, which must place within the 10th percentile at qualifying tournaments, are invited to the national championship.

“When fishing any lake or river, you have to find the fish and figure out how to catch them,” said Ge. “We put in a lot of work during practice to figure the fish out, but two days and over 20 hours on the water later, we settled on our pattern for the tournament.” Added Tabisz: "We were looking for something a little different from our competitors at Smith Lake. Our decision paid off with two big bags of spotted bass each day. This tournament was definitely worth the 10-hour drive to Alabama.”

Michigan Fishing, which maintains faculty support through the School for Environment and Sustainability (SEAS), is made up of men and women from academic units in the College of Literature, Science, and the Arts; Engineering; SEAS; and others. In addition to formal participation at collegiate tournaments, Michigan Fishing is engaged in conservation, education, youth angling, volunteering, and other activities to promote the outdoors. Membership is open to all students, graduate and undergraduate. For more information about Michigan Fishing, visit its website.

Marc Gaden (PhD '07) is an adjunct assistant professor at SEAS and the communications director of the Great Lakes Fishery Commission.