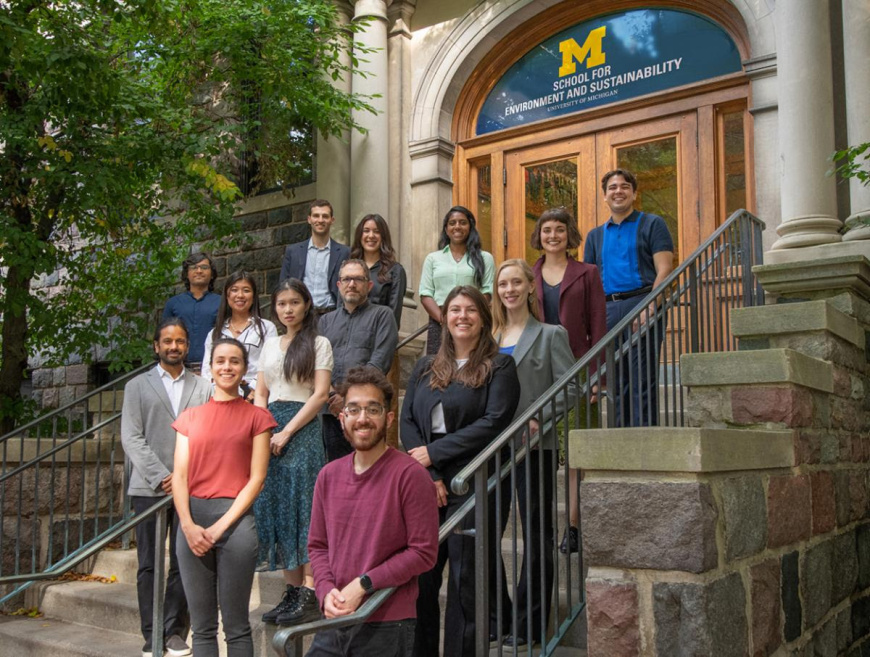 Since returning from COP27, the United Nations climate change conference, University of Michigan student delegates have been reflecting on their experiences at the two-week event, which was held Nov. 6-20 in Sharm El-Sheikh, Egypt. COP27 brought together 112 heads of state and more than 46,000 delegates, including scientists, policymakers, activists, and youth. At the conclusion of COP, the Conference of the Parties agreed to establish loss and damage funding for vulnerable communities and recommitted to keeping the 1.5°C target goal alive through a new mitigation work program.

Here, several delegates, including School for Environment and Sustainability (SEAS) students, share their thoughts about the proceedings.

“It’s easy to be a cynic about the state of international climate affairs and the role of COP27 in general. But, attending COP27 was an amazing privilege awarded to me. The energy of the venue was electric. The power of using our collective voices was so clear in a space like this, even with the clear dynamics at play. COP is a mixture of politicians, delegates, NGOs, nonprofits, researchers, activists, students, and anyone else you can think of. On the second to last day of COP27, I attended the People’s Plenary, which is essentially when civil society comes together to read out their list of demands. Imagine voices from all over the world coming together in one room. I think sometimes activism can feel so isolating because it’s so localized. But in that room, it was clear: We were all fighting together. Voices from Africa rang in solidarity from voices with Ukraine and Iran. The chant, “The people united, can never be defeated,” reverberated through the venue. It was reminder that indeed, our individual voices can matter.

“With my dual degree at SEAS and Ross, I was particularly interested in the intersection of business and environmental justice issues, which came in the form of Loss & Damage (L&D) financing conversations. L&D is essentially the idea that developed nations should be paying the most vulnerable nations for the impacts of climate change (such as the floods in Pakistan). However, countries are saying they don’t have the money to pay, and business is saying they need the support of the government. But I think the call to action is clear: The private sector needs to take accountability in thinking about implementation of these financing mechanisms. COP27 was tagged as the “implementation COP,” and business is the vehicle of implementation. I am impassioned to champion this cause for future business leaders.”

“As an urban planner, it was apparent to me that at COP27, there was a lack of conversation around cities and the built environment. Over 50% of the world lives in cities. Yet, cities were not very well represented. We need to ask more questions about how urban areas can play key roles in mitigating and adapting to climate change.

“However, at the same time, COP essentially builds itself a small city for 30,000 people with infrastructure, transportation, food, etc. It was a case study of what to do and not to do for urban sustainability. In one instance, the shuttles set up for COP were a prime example of sustainable and accessible public transportation. It wasn’t solely the COP delegates that took the shuttles, but moms with their children, tourists, and locals on their way to work. It was really encouraging to see that if easy-to-use and reliable transportation is an option, people will use it.”

“For developed countries, climate change mitigation from an energy systems perspective often takes a one-dimensional technocratic approach. I was able to observe this firsthand at an “Energy Islands” session where European leaders talked about building an offshore wind energy island at a cost north of $30 Billion. It seemed from the discussions in the room that solutions like these were the only way to strike a balance between the world’s growing energy demand and reaching ambitious climate goals.

“The next day, I attended a session where energy leaders from African and Asian countries talked about issues of energy access and energy inequity. “Energy brings opportunity, irrespective of where it comes from, and when the global north has taken advantage of that for so long why the rest of us should remain behind,” explained one of the panelists. With energy systems heavily reliant on fossil fuels and growing demands for electrification and energy access, can developing countries in the south afford to get rid of fossil-heavy plants? For some, there are moral issues and aspects surrounding these questions, and a technocratic mindset to answer these seems futile.

“Even though the UN and the COP work to align the world on climate issues, this moral and technical dichotomy that was present in two adjacent rooms laid bare the disconnect between the global north and the global south—a disconnect, which I believe, still continues to grow.”

“Attending COP27 was an immensely inspiring and frustrating experience. I focused heavily on climate justice during my time at the conference, and while frontline communities and environmental justice advocates made themselves heard in protests and side events, their perspectives were barely incorporated into negotiations. This was not surprising; accompanying the fervent energy towards finding climate solutions were constant reminders of the stubborn policy stagnation and fossil fuel obsession that have defined international environmental efforts for the past several decades. Climate progress, especially at the global scale, continues to be slow, because the wealthiest nations strategically decelerate negotiations. This was visible at COP27; wealthy nations suggested measured, methodical approaches to urgent issues like loss and damage, while poor nations advocated for swift, decisive action. This dynamic reflects the divergent interests of countries with different wealth levels and the resulting tensions that slow progress towards meaningful climate action.

“The lopsided power dynamics at COP27 were juxtaposed with amazing displays of activism, however, and I left the conference feeling muted hopefulness. It was inspiring to see climate justice advocates and representatives from poor nations pressure wealthy nations to commit to implementing equitable and proven climate solutions. I saw incremental progress in negotiations, and there seemed to be more focus on climate justice than ever before. But frankly, the enormity and severity of the climate crisis requires more than incremental progress. COP27 showed me that wealthy nations will do whatever they can to avoid their responsibilities to respond to the climate crisis. I am hopeful that they will soon change course though, as calls for their cooperation are becoming louder each year. To initiate transformative change, these countries need to provide loss and damage funding to poor nations, stop investing in and extracting fossil fuels, and partner on equal terms with developing countries to help with their mitigation and adaptation efforts. Real cooperation and leadership from wealthy nations is necessary to avoid the worst effects of climate change, and the international community continues its efforts to convince these countries to pursue legitimate climate partnerships. Calls for this at COP27 were loud and clear.

“We all need these efforts to succeed to avoid a grim future filled with flooding, droughts, fires, and mass climate displacements. Wealthy countries—the United States, in particular—need to act now, and citizens in these countries can help by advocating for decisive climate action from their governments. This is where I plan to focus after COP27, and I think it is a great place for us all to start.”

Yingxiao Zhang, a fourth-year PhD candidate in the Department of Climate and Space Sciences and Engineering (specialization in climate sciences)

“Attending COP is definitely eye-opening for me. Being selected as a delegation member gives me the opportunity to interact with people from different backgrounds and hear their thoughts about climate change and corresponding solutions. Many people I met have given me faith in solving the climate crisis, they may be students younger than me, or those in their senior careers, but they are all caring, consistent, and passionate about climate actions to make a difference.

“However, not everything was as I expected. As a climate scientist, before attending COP, I was looking forward to being exposed to international climate policy negotiations and having a better understanding of the role of scientists in this process. However, at the conference, I noticed that political and financial discussions overpowered the conversation compared to discussing the science itself. This caused a power imbalance between scientists/climate activists and politicians/entrepreneurs, and it was frustrating. This experience highlighted that scientists need to have more opportunities to engage in conversation with decision-makers.“Overall, this experience is very beneficial to me, I explored myriad career pathways and broadened my understanding of climate science. I'm grateful for this opportunity and the support from the University of Michigan and SEAS, CLaSP, and NERS departments.”