Wege Lecturer Naomi Klein: 'All of Us Need to Act on the Climate Emergency' 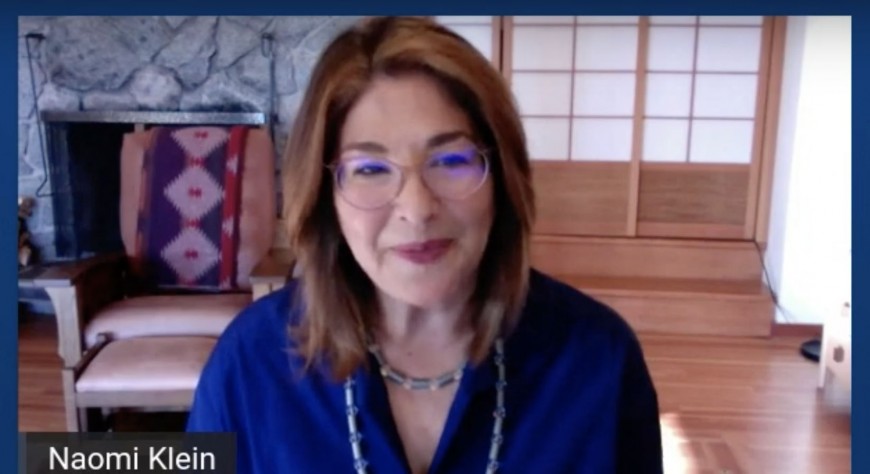 The climate justice movement has helped to shape the agenda of the Biden administration, and it’s a testament to the power of organizing, journalist, columnist, and author Naomi Klein said March 10 during the 2021 Peter M. Wege Lecture on Sustainability.

“You get what you organize for,” said Klein, senior correspondent at The Intercept and the inaugural Gloria Steinem Endowed Chair in Media, Culture, and Feminist Studies at Rutgers University. She noted that climate activists deserve credit for pushing the White House agenda on climate, and even for some of the diversity reflected in President Biden’s appointments like Secretary of Interior nominee Deb Haaland.

“I’m not sanguine,” she said. “I’m always hearing the climate clock ticking in the background, but I also feel like we’re in a better position than we’ve ever been politically, and I’m excited to see what comes next.”

More than 1,000 participants tuned in to the Wege Lecture, which is U-M’s flagship sustainability lecture series. Held virtually for the first time, it was hosted by the School for Environment and Sustainability and the Center for Sustainable Systems.

During the casual conversation, Klein was asked questions about the climate crisis that were most important to students.

A proponent of the Green New Deal, Klein said we need to be more expansive and inclusive in what we consider to be green jobs. “It’s not just a guy in a hard hat putting up a solar panel,” she said. “It’s also an immigrant woman taking care of a child being paid a living wage in her union job, having her work respected and valued as part of a low-carbon economy.”

Klein said President Biden’s proposed Civilian Climate Corps has “tremendous potential” for young people, “who are experiencing the economic crisis on the front lines” because of the loss in service jobs resulting from the pandemic.

“The idea of putting young people in the community with one another on the land and really solving the [climate] crisis is something I’m particularly excited about,” said Klein, who has written the best-selling books On Fire: The (Burning) Case for a Green New Deal, The Shock Doctrine, and This Changes Everything: Capitalism vs the Climate.

Klein is encouraged that young people from indigenous and other marginalized communities are leading advocacy efforts, citing the Dakota Access Pipeline protests and the Flint water crisis as two examples. “When people feel like they are truly fighting for their future, the quality of the fight, the tenacity of the fight, is just completely different,” she said.

Klein said it’s important to think beyond one’s nation when talking about climate change because “the unfair and unjust impacts of the climate crisis play out globally. So, it’s not just about changing the face, it’s about changing the principles that the most impacted need to lead.” Klein also said with decarbonization comes a focus on creating more affordable housing.

Reiterating that the climate crisis needs to be treated as an emergency, Klein noted that the best way to help young people overwhelmed by climate change is “for all of us to act on this emergency and not offload it onto them.” She stressed that we are all in this together.