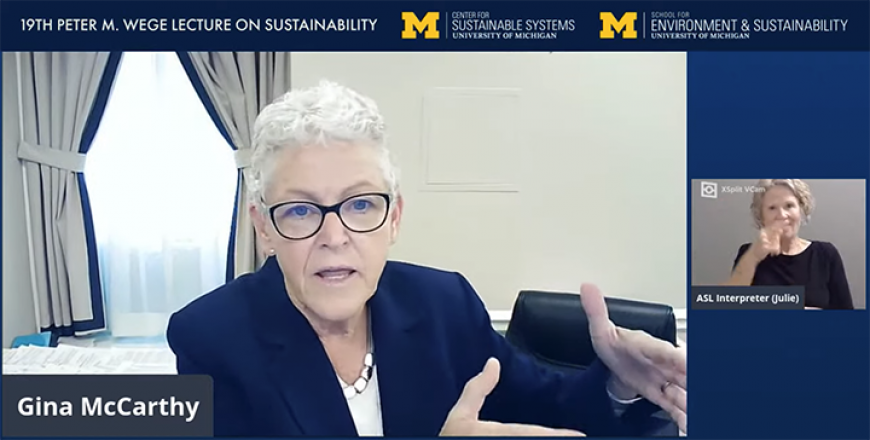 In order to motivate people to address climate change, you need to speak about it in “human terms,” said Gina McCarthy, the country’s first National Climate Advisor, during the Oct. 14 Peter M. Wege Lecture on Sustainability.

“For too long, climate change has been a planetary issue where people feel like they can’t fix it,” she said. “Let’s talk about climate change solutions as a way to advance human beings, not just their air quality. We have to convince people that their lives are going to get better.”

Nearly 800 participants tuned in virtually to the 19th annual Wege Lecture, which is U-M’s flagship sustainability lecture series. It was hosted by the School for Environment and Sustainability (SEAS) and the Center for Sustainable Systems to commemorate the center’s 30th anniversary.

The talk was moderated by Dr. Tony Reames, an Assistant Professor at SEAS, and the Senior Advisor for the Office of Economic Impact & Diversity at the U.S. Department of Energy.

She cited the need for states, and particularly cities, to collaborate with the federal government on climate change efforts.

Even though the Biden administration is “paying attention” to climate change, “it still comes down to community-level work and whether we can light a fire of hope that we can move forward together,” said McCarthy, who previously was the 13th Administrator of the Environmental Protection Agency.

“That’s where you can grab people’s imagination and let them know that it’s all about them, and that nothing we’re asking will do anything but make their lives better.”

McCarthy called out Ann Arbor for the “great job” it is doing with climate change work, noting that the city is focused on energy efficiency, waste and recycling efforts, and transportation and building solutions.

“That's why I'm excited about the university and the work you’re doing there, because the university is a big part of Ann Arbor, and you can bring juice to the table,” McCarthy added.

She said it’s important to be “intentional” in making sure that everyone, including underserved communities, benefits from climate change solutions.

“It’s not going to be good enough if we fix the planet and leave the most impacted communities to be on their own,” McCarthy said, noting that the Biden administration’s Justice40 Initiative was formed to address environmental injustice.

“We need to invest in major infrastructure like our water systems if we want to be able to respond to people’s needs today,” McCarthy said. “There are people in the United States of America who don’t have access to clean water. How dare we be in this position today?”

She added, “You cannot build this country and allow it to be on the backs of those who are poorest and who are communities of color. That will never be a sustainable future.”

The lecture was followed by a question-and-answer session about advancing environmental justice with Dr. Kyle Whyte, the George Willis Pack Professor of Environment and Sustainability at SEAS, and a member of the White House Environmental Justice Advisory Council.