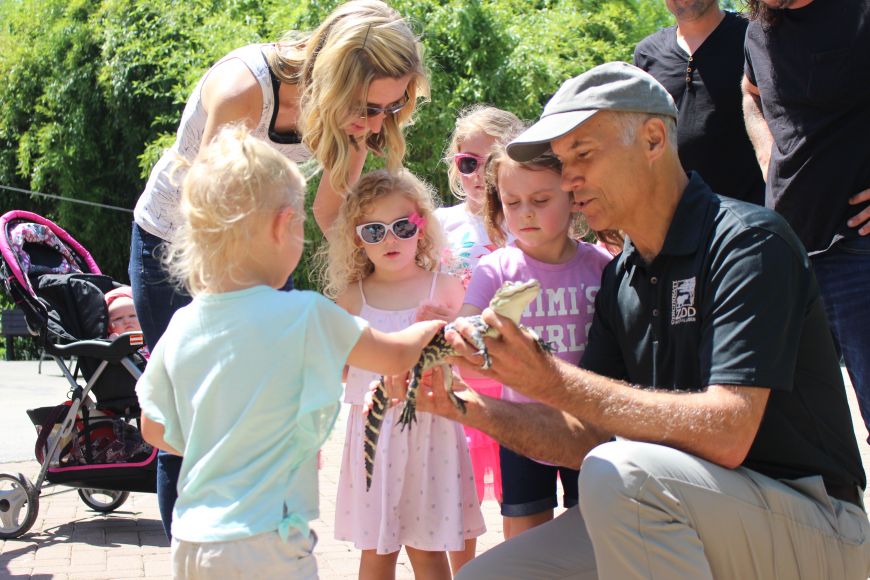 Thane Maynard believes that “zoos are the front door to conservation.” Not only do they contribute to a global animal conservation network through managed breeding and research, but they are also public education centers. As Director of the Cincinnati Zoo, Maynard has worked to ensure that this education informs the general public about how they can get involved in conservation.

According to Maynard, “huge problems like habitat loss and climate change will only be solved by hundreds of millions of better, more informed, decisions being made every day, everywhere.” Maynard finds that being surrounded by beautiful, rare, and endangered animals is the perfect place to inspire this type of global thinking and he teaches by example.

Since 2006, Maynard and the Cincinnati Zoo have worked to create more sustainable daily operations and reduce their environmental impact. In that time the zoo decreased their water usage 75%, from 220 million gallons to 90 million gallons per year, by fixing leaks in habitat pools, installing low-flow faucets, using pervious pavement to harvest rainwater and installing filtration systems to use this rainwater in habitats (like the 67,000 gallon pool in Hippo Cove)! Despite these seemingly big changes in infrastructure, Maynard holds that the most impactful change has come from the daily behaviors of the zoo staff, by reminding them to turn off faucets and unplug equipment when not in use.

In 2010, the Cincinnati Zoo was proclaimed “the Greenest Zoo in America”. But Maynard recognizes that there is always more to be done to reduce and reverse our effects on the planet. To continue breaking boundaries in the industry and serving as a model for the region, the Cincinnati Zoo & Botanical Garden has also committed to becoming a NET ZERO facility by 2025.

Maynard understands that sometimes the people of Ohio don’t feel connected to people in places across the world. But, through these habitats, the public can see sustainability in action and global impact. In 2011, Maynard and the zoo started an initiative to collect old cell phones to protect gorilla habitats in the Congo, where a mineral used to make cell phones is mined. They placed the collection bin in Gorilla World so that visitors could see the endangered species that they were helping. Since then, the zoo has recycled over 100,000 cell phones and helped many people connect their actions to global conservation efforts. Maynard continues to create similar initiatives to inspire millions of better, more informed, decisions in Ohio.