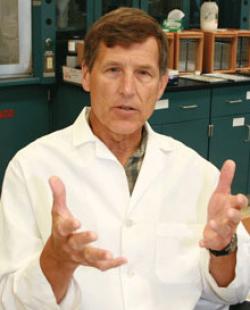 Nalepa’s research focuses on understanding changes in the structure, function, and health of lake bottom ecological communities in response to a variety of factors, including invasive species. Nalepa joins the U-M Water Center after working for 35 years at the National Oceanographic and Atmospheric Administration’s (NOAA) Great Lakes Environmental Research Laboratory (GLERL). Nalepa is probably best known for his seminal work on invasive mussels, including zebra and quagga mussels, and their effects on Great Lakes communities. This work stands out as some of the most widely cited and respected in the huge body of literature on the impacts of invasive species. It is because of his long term efforts that we have a clear picture of the invasion history, as well as the effects following the invasion, of zebra and then quagga mussels. Zebra and quagga mussels can colonize the surface of many things, causing serious harm and disruption to water supplies, recreation-based industries, and native ecosystems. Through their highly efficient filter-feeding, they decrease the food available for fish and other organisms, disrupting fisheries and harming native aquatic communities. Some of Nalepa’s recent research has focused on examining changes in lake bottom communities in Lakes Huron and Michigan. He has led efforts to determine why the shrimplike Diporeia spp. are rapidly disappearing throughout the Great Lakes. Diporeia spp. were a major food source for commercially important fish species like lake whitefish and also prey fish that species such as salmon and walleye depend upon. Nalepa’s work has greatly improved our understanding of the connections between lake bottom communities, invasive species, and fish communities in the Great Lakes.