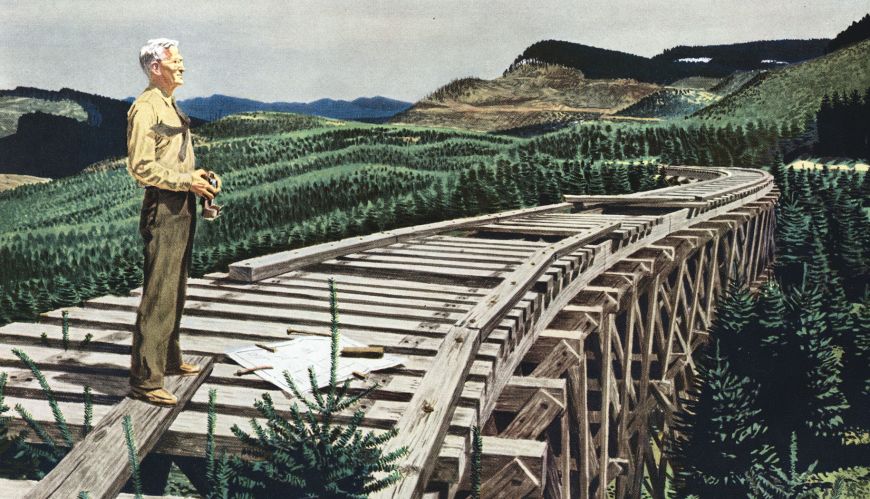 Always on the leading edge of education, the University of Michigan identified the need to broaden the curriculum in the Department of Forestry.

As plans to expand the department coalesced in the months leading up to 1927, a man named Samuel Trask Dana was offered the position of chair of the Department of Forestry. A long-time forestry specialist in the U.S. Forest Service, both before and after serving as a U.S. Army Captain in World War I, Dana held the position of forest commissioner in his home state of Maine. He accepted the U-M position, but with the condition that the department become the School of Forestry. The U-M Board of Regents approved, and made the significant addition of “conservation” to its name—making it the first school of its kind in the nation, and Dana its first dean.

The word ‘conservation’ was added to the name of the school to indicate that its interpretation of forestry is much broader than the ordinary conception, and to emphasize the fact that in addition to the training of professional foresters, one of its important functions is to teach the philosophy of conservation as the fundamental basis of permanent national prosperity.

Dana’s leadership would invigorate the new school for the next two decades—through the economic and environmental crisis of the Great Depression and the devastating upheaval of World War II.

Dana would later propose sweeping changes in the final years of his tenure, surpassing the recommendations of a committee of conservationists tasked with the school’s reorganization. Dana’s plan ushered in a new era that recognized both the value and broader scope of the nation’s natural resources. A new name for the school, along with a new mission, would soon follow.

THE GREAT DEPRESSION AND THE CIVILIAN CONSERVATION CORPS

The Great Depression was the focus of the 1930s. In 1933, in response to the rising unemployment in the country, President Franklin D. Roosevelt established the Civilian Conservation Corps (CCC). The CCC was designed to provide unskilled manual labor jobs related to the conservation and development of natural resources in rural lands owned by federal, state, and local governments. There were a number of CCC camps located in Michigan, Wisconsin, and Minnesota. Much of the cut-over and burned over land surveyed by Michigan foresters in the 1920s was restored during the CCC days from 1934 to 1942. The School of Forestry and Conservation provided much of the leadership and expertise needed to direct the men doing the CCC restoration work.

The war years from 1942 to 1945 saw an understandable reduction in students. However, the need for forest products to support the war effort resulted in the increased need for foresters to ensure that the harvesting of forests was managed on a sustainable basis. Many of the foresters called upon were Michigan graduates. In support of the war, an accelerated program was offered in 1942. This new program allowed students to register at the School of Forestry and Conservation directly from high school, and gave young men a basic training in forestry subjects that would be of direct value to them in either the military or civilian activities connected to the war. After the war, the increased demand for housing to provide homes for returning veterans resulted in a similar increase in the demand for professional foresters and other natural resource managers.