1992-2017 The School of Natural Resources and Environment 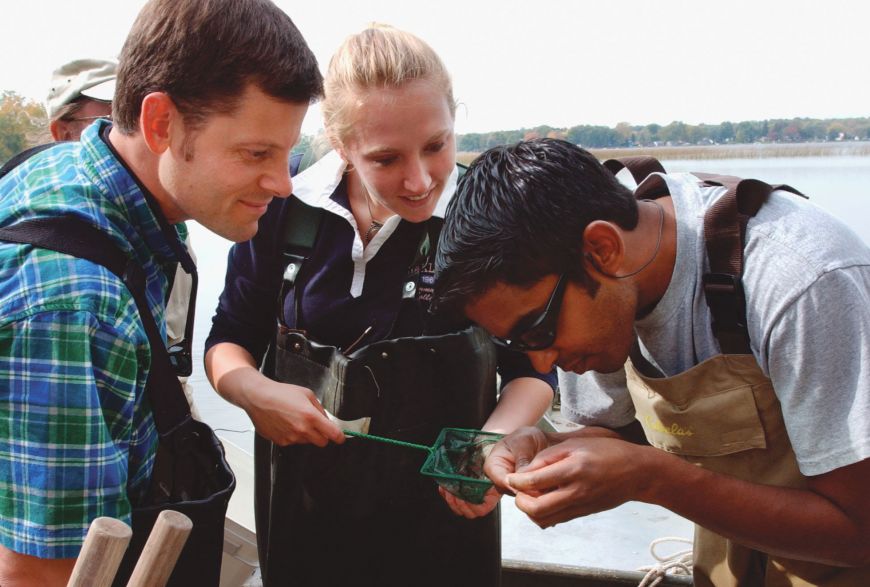 Caption
Students in the field with the institute of fisheries research, 2004

The rise of the modern environmental movement in the late 1960s had awakened public awareness in the intervening decades. Despite resistance from those opposed to government regulation, there was now a global movement concerned with the issues of increasing population, the health effects from industrial pollution—and the alarming loss of old-growth forests, clean drinking water, fertile top soil, and wildlife. New studies, including Bill McKibben’s 1989 release of his landmark book, The End of Nature, warned of yet another emerging phenomenon: climate change.

Upon this stage, the School of Natural Resources proved itself to be a leader in the U.S. educational community when, in 1992, U-M officially changed the name to the School of Natural Resources and Environment (SNRE). The new identity recognized the interconnected ecosystems of human society within the physical world—and signaled the school’s intention to pursue deeper exploration in the natural and social sciences.

The Samuel Trask Dana Building underwent a five-year green renovation and received  Gold LEED Certification from the U.S. Green Building Council. The Dana Building became the first major academic renovation to receive such a high rating in the state of Michigan, and was among the first in the country.

SNRE was the first school in the U.S. to launch an Environmental Justice program that offered undergraduate and graduate degree specializations. Established by Bunyan Bryant and Paul Mohai in the 1990s, the program would gain the expertise of Dorceta E. Taylor, professor, author, and historian, in 2002.

It was integral to Dean Samuel Dana’s original vision for the school to create well-rounded professionals by giving students a holistic and interdisciplinary education. In the 1990s, SNRE made bold strides toward achieving that vision through cross-campus environmental initiatives, grant-funded projects, and newly founded institutes.

Erb Institute (1996)
Michigan alumni Frederick and Barbara Erb gifted $5 million to launch the Erb Institute, providing students the opportunity to pursue an MS degree and MBA simultaneously. After the institute was established, the Erbs continued to support this joint venture with gifts that totaled $20 million, representing the largest known commitment to a university for interdisciplinary teaching and research in the area of global sustainability.

Center for Sustainable Systems (CSS) (1999)
CSS provided a space for life cycle design and assessment with more than 100 research projects. Supported by the Peter M. Wege Foundation, CSS is globally recognized as a leading academic institution for this research.

Sustainable Food Systems Initiative (2007)
This forward-thinking initiative was created to engage an interdisciplinary mix of students, faculty, and communities at local and global levels to learn from and build food systems that are health-promoting, economically viable, equitable, and ecologically sound.

Graham Environmental Sustainability Institute (2007)
Launched as a campus-wide organization accessible to all students and faculty, the institute’s mission was to “encourage synergy and facilitate multidisciplinary research and teaching on sustainability.”

Sustainability Without Borders (SWB) (2011)
SNRE students were leading the charge to engage with the global community. SWB, founded by Jose Alfaro (PhD ’14)—a student at the time, and now a SEAS faculty member—has partnered with communities, governments, and aid organizations to successfully develop and implement projects to address resource scarcity in the areas of water, energy, food and waste. Their work has impacted communities from Liberia to Detroit.