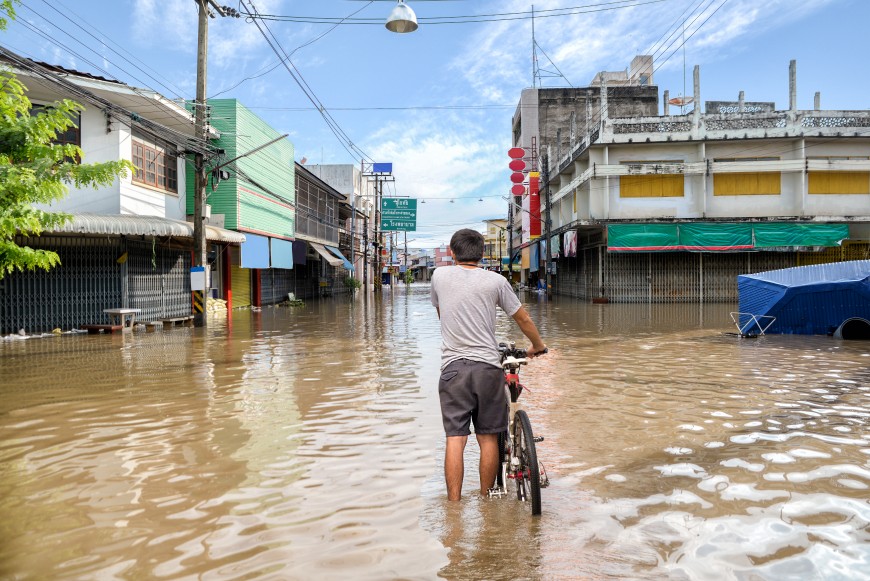 Changing the Game in Ecological Research and Management

Nearly everything humans eat, drink, and breathe is the product of a living organism that inhabits a natural or human-dominated ecosystem. Protecting biological diversity and ecosystem function through conservation and restoration is necessary to produce the goods and services that allow people to prosper. The SEAS community responds by working to protect the Earth’s biodiversity and ecosystem services.

The new U-M Institute for Global Change Biology—spearheaded by SEAS faculty Allen Burton and Inés Ibáñez, along with colleagues Allison Steiner (College of Engineering) and Knute Nadelhoffer (Department of Ecology and Evolutionary Biology)—is among the U-M projects funded in the first round of investments from President Mark Schlissel’s Biosciences Initiative.
Global change biology seeks to understand the biosphere’s responses to a variety of human activities, including climate change and shifting ecological regions, land-use conversion, release of pollutants, and species introductions. The new institute will foster research to understand and forecast the interactive effects of global change drivers on organisms and ecosystems.
“The Institute for Global Change Biology will address what may become a wicked problem of the 21st century: the growing interdisciplinary bioscience challenges associated with climate change, disease, invasive species, pollution, and a growing human population,” said SEAS Dean Jonathan Overpeck.

SEAS Professor Dr. Arun Agrawal teamed up with Johan Oldekop of the University of Manchester to conduct the largest study yet on community-based forest management. Their findings—including the statistic above—were published in Nature Sustainability.

<4% of environmental organizations reporting staff demographic data as of 2019

In 2014, when SEAS Professor Dr. Dorceta Taylor released her groundbreaking report, "The State of Diversity in Environmental Organizations," she called for more reporting on the demographic characteristics of environmental organizations.

Subsequently, Green 2.0, an initiative focused on increasing racial diversity across mainstream environmental organizations, partnered with GuideStar, a digital clearinghouse of nonprofit sector information, to make such reporting part of the profile that environmental nonprofits put on the GuideStar platform.

Taylor found that five years later, despite the efforts of Green 2.0 and GuideStar, less than 4 percent of the 1,254 nonprofits included in the study are reporting demographic data about their employees.

Taylor’s most recent study was published in the journal, Sustainability.

The berry-borer beetle could be standing between you and your next cup of coffee. Brazil alone reportedly loses $300 million annually due to beetle infestation on its coffee plantations. One of the challenges for coffee growers is the fact that colonies of the beetles spend their entire lives within the precious berries – destroying the berries while remaining protected from pesticides.

Conducting research with a team of colleagues on a coffee plantation in Chiapas, Mexico, SEAS alumnus and doctoral student Jonathan Morris (MS ’16) and Estelí Jimenez-Soto of the University of California, Santa Cruz, decided to enlist the help of the Central American ant called Azteca sericeasur, a natural predator of the berry-borer beetle. The Azteca ants, they learned, were fond of nesting in nearby Inga trees, but lacked a way to travel across the gap between their nests and the coffee plants.

Morris and Jimenez-Soto’s solution was to build the ants a bridge—or in fact, many. Their “rope bridges,” made from single lines of string connecting the Inga trees with the coffee plants, soon became a major thoroughfare for the ants.
Ultimately, the study, published in the journal Myrmecological News, revealed that the string bridges increased the overall rate of beetle removal—giving coffee growers an innovative method that may one day close the gap between their hard work, a sustainable crop, and your next cup.

"We were pleased to contribute to a growing body of research which shows that alternative management options exist in agriculture that can be mutually beneficial for both crop production and biodiversity conservation," said Morris. "Agroecological approaches like these will be increasingly necessary as society struggles to grow food more sustainably in a world threatened with climate change and other environmental challenges."

If Forestry alumni Frank and John Craighead had a crystal ball, they would have seen their influence in the work of new SEAS faculty member Dr. Neil Carter

Neil Carter, who leads a team of researchers and resource managers supported by NASA and the National Park Service, uses remote sensing and satellite imagery to understand how artificial night light and human-made noise pollution affect predator-prey relationships. The team’s work focuses on the fastest growing region in the United States—the Southwest.

The Southwest is mostly a very dark region at night, characterized from the sky by vast swaths of black. But the region’s trajectory of rapid development has scientists and state agencies observing more and more nighttime illumination. Think of the night light from Vegas alone.

Starting with satellite imagery from NASA, the team realized they had a key secondary data source: GPS-collar data on mountain lions and deer collected by multiple agencies across state lines for 20 years. Compiling all of the long-term, high-resolution data into one regional analysis, Carter and company have discovered major differences in predator-prey behavior that correlate with levels of light and noise pollution. The mountain lions seem to know that bright spots, like Salt Lake City, call for a unique style of hunting compared to more natural, dark areas like Capital Reef National Park.

"How cougars hunt their prey appears to be totally different in areas with highly elevated night light," said Carter. While cougars normally like to hunt in topographically complex landscapes like rocky mountainsides and crags, he found that in brighter areas, the cougars were hunting in flatter spaces farther away from forests. In fact, night-light levels were the strongest predictor of where cougars successfully hunted deer. "Those cougars are no different from their nature-dwelling counterparts in their attraction to food—but feeling vulnerable from the light, it appears they are more willing to wait for exactly the right (darkest) moment to pounce," he said.

Carter likes to use the words “coexistence” and “coadaptation” to describe the behavior changes he finds in animals and humans. "Cougars, deer, and people all must adapt to each others’ changing behaviors," he said. "Those changes can alter food webs in unpredictable ways: Deer and cougars might change where and when they forage, in turn affecting vegetation patterns. The behavior changes might also have impacts on human-wildlife interactions, with deer-vehicle collisions increasing or decreasing in certain areas."

"Now is the time to be doing this research," said Carter. "If we wait until regional development stabilizes, it will be too late to conserve these natural processes and achieve human-wildlife coexistence."