Fighting Wildfires is a ‘Delicate Balance’ 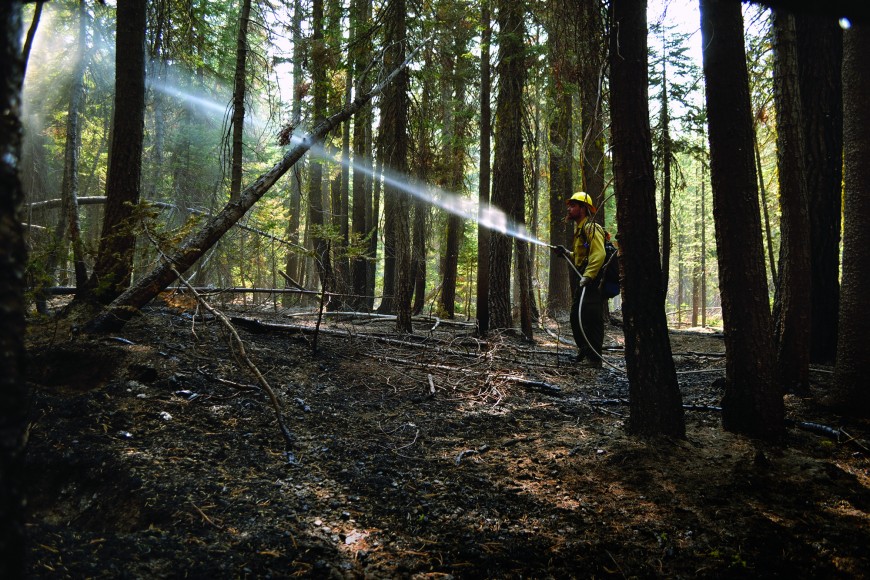 Caption
A member of the Bureau of Land Management Mojave Engine Crew reduces the heat around hot areas of the Antelope Fire in Northeast California.
By Lori Atherton | Photos by Harold Rice

Harold Rice (BS ’16, MS ’19) has tremendous respect for the wildland firefighters who put their lives at risk to contain active wildfires, particularly in the West.

For two months over the summer, Rice took on that physically demanding job as part of a helitack, or helicopter, crew that was stationed in Moab, Utah. He often worked 16-hour days suppressing fires in southeastern Utah and western Colorado.

Some fires were short—burning for one or two days—while others lasted for several weeks or longer. Rice didn’t know what type of wildfire situation he would encounter until he and his crew arrived on the scene.

“Your adrenaline rises quickly in those moments. You are excited, and somewhat concerned, to see what that smoke on the other side holds,” says Rice, who works for the U.S. Forest Service.

“Will you be suppressing a fire barreling toward someone’s home? Will you be going to a fire that is so big you can only sit back and watch until more resources arrive? Will you be getting out with only your crew to put out a few trees? The fear of the unknown is certainly there, but also the fear of knowing that getting into a helicopter over a fire is a hazard and getting out of it to fight a fire is yet another.

“The blessing in these moments is that you will work off that ever-building adrenaline and get to see the fruits of your labor in putting out that fire.” 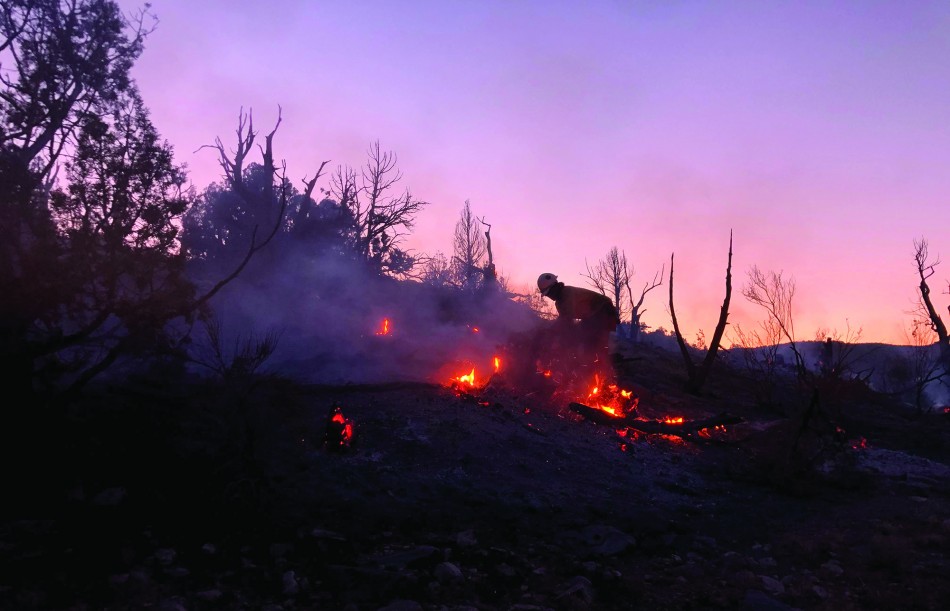 A member of the Moab Helitack Crew cuts down a burning stump during the Bushy Springs Fire near Blanding, Utah.

Putting out fires is not Rice’s primary job. As a fire technology specialist with the Forest Service, he develops new tools and technologies for fire management in the southeastern United States, or Region 8, which encompasses 13 states and Puerto Rico.

A big part of Rice’s job, though, is emergency response. He has assisted with national emergencies including hurricanes and the COVID-19 pandemic, as well as wildfires, which brought him to Utah in June.

At that time, the western United States was at preparedness level five—the highest level—for wildland fire activity, creating a dire need for responders from the Bureau of Land Management, Forest Service, National Park Service, and other land management agencies to step in and help.

“What happened this year—and what is happening almot every year now—is that the Western fire season gets so incredibly intense that there aren’t enough firefighters out West to fight the wildfires themselves,” notes Rice, who estimates that he responded to about 15 wildfires while serving on the helitack crew in Moab.

Rice describes being on a fire call in which the escape road he had planned to use became inaccessible. The fire had crossed the road and was heading toward him, so Rice’s crew had to find a safety zone—in this case, a large grassy area—where he could wait until the fire passed.

“It was a scary situation since it was my first time caught in an environment like that where the fire was all around me,” says Rice. “That’s when the more experienced firefighters had to reassure me that the safety zone would protect us.”

He also recalls what it was like being on the front lines, battling blazes with his crew. “Even when your adrenaline is pumping, the heat quickly brings you back to reality,” Rice explains. “The fire intensity can be so high that you feel the hairs on your face nearing combustion, as though you might yourself catch on fire or get a severe burn just from working the open flames.”

Along with the heat and flames, smoke is another hazard of the job, its effects exacerbated by the changing weather. “Each time the wind shifts, which occurs a lot due to fires creating their own weather, you are inundated with smoke,” Rice adds. “The thick haze fills your eyes, making it nearly impossible to see; it then quickly moves to your lungs, causing difficulty in breathing, until nature gives you the remedy with another wind shift.

“It’s a delicate balance between needing to get the fire suppressed while also making sure your body is protected enough to continue fighting hour after hour, day in and day out.” 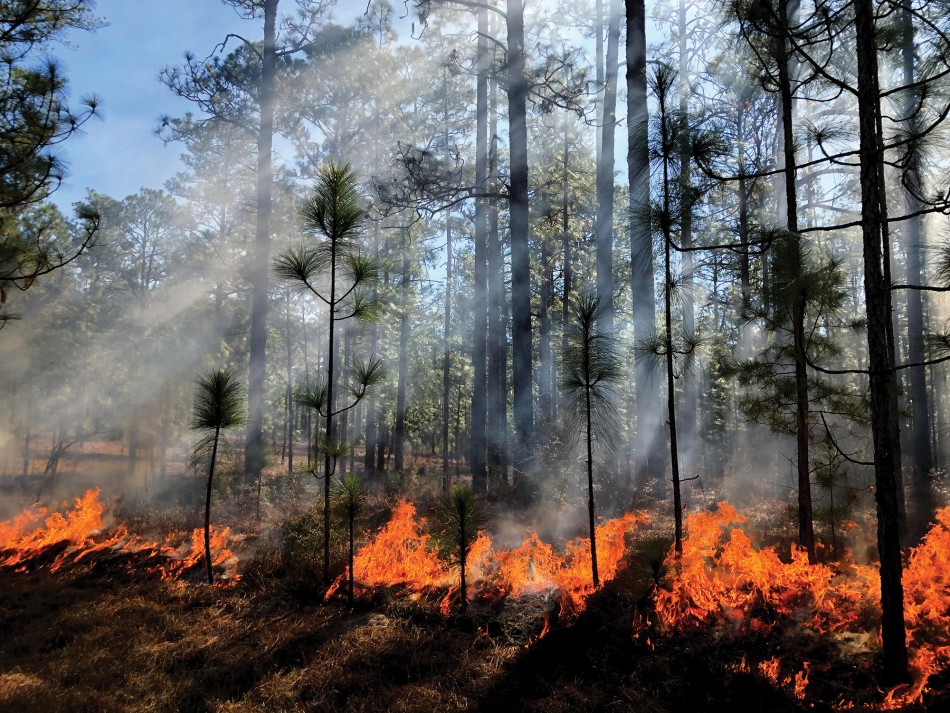 The sun shines through the smoke and fire as a prescribed burn removes the forest understory in the National Forest in Mississippi.

The Future of Wildfire Management

When Rice isn’t responding to emergencies, he’s focused on how to reduce the likelihood and/or intensity of future wildfires. The Forest Service primarily utilizes prescribed burning, a hazardous fuels reduction technique, in the southeastern region of the United States, where environmental conditions tend to be less dry than in the West.

Prescribed burns involve the controlled burning of the forest understory, such as brush or grasses, to reduce hazardous forest fuels that could ignite tree canopy and create an extreme fire.

While prescribed burning isn’t without risk, Rice notes, the benefits far outweigh the liabilities. “Burning can bring organisms back to an ecosystem while also protecting the people who live in that area and reducing the number of dangerous fuels there,” says Rice, who notes that prescribed burning originated with Indigenous cultures.

Rice sees prescribed burning as an effective tool that could be employed in the West, though overall, he views the future of wildfire management as one involving multiple approaches.

That could mean allowing fires to burn up a larger portion of land because it’s beneficial for that ecosystem, Rice says. Or it could mean reducing the amount of forest fuels as part of timber reduction projects in which trees are cut down or brush is removed using bulldozers or other machines. It could also mean using herbicides or other treatments to kill off the forest understory.

“I think it’s pretty clear that the wildfire problem isn’t going away, and it’s only getting worse,” Rice says. “These ecosystems have burned for thousands of years, and they’re not going to stop burning just because we want them to. There needs to be a balance between understanding how to manage wildfires and protect people who are living in those areas, but also trying to manage wildfires to consider the best decision for the land.

“My hope is that there will be more managing of fires for ecosystem benefits,” he adds, “but that there will continue to be suppression efforts to protect property and individuals. 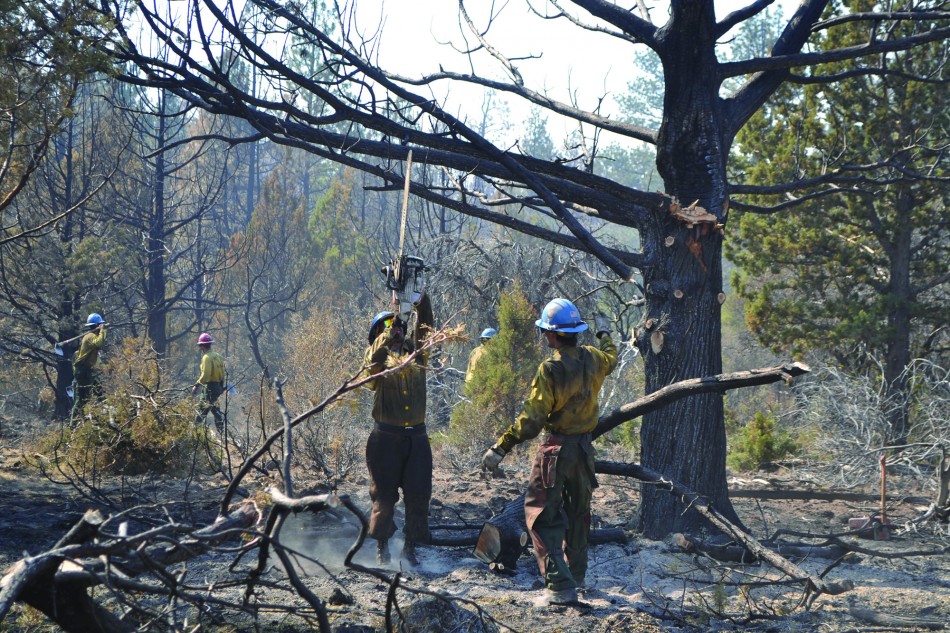 Members of the Dalton Hotshots remove unburnt tree limbs from a hot tree near the edge of the Antelope Fire in Northeast California.

Dr. Paige Fischer, an associate professor at SEAS, was working towards earning her PhD in forest resources social science at Oregon State University, researching private landowners’ behavioral motivations to conserve oak habitat, when she recalls wildfires becoming a major public policy issue for the first time. “The community of people who were involved in managing and conserving forests started realizing that it wasn’t only about protecting forests from exploitation anymore. The bigger issue was fire and the fact that forests had become unhealthy because of past management, but also because of climate change.”

Fischer pointed out that as forest fires have become a more serious issue in the U.S., those involved in the forestry sector must now consider managing for fire before all other issues. The increase in the severity and number of forest fires in past years has brought together historically adversarial parties; conservationists and the forestry industry now have a common ground.

Currently, Fischer researches human behavior in the context of environmental change, specifically in forests. She will lead the Berman Western Forest and Fire Initiative (WFFI), which recently was established at SEAS by a philanthropic gift from Steve (BS ’76) and Kathy Berman.

The initiative will involve U-M faculty, postdoctoral researchers, and students from a wide range of disciplines including behavioral sciences, ecology, engineering, and economics. They’ll work with researchers based in the western United States to better understand and manage how to maintain a healthy relationship between forests and the communities that depend on them.

Unlike other programs that focus on wildfires as a forest management or fire management problem, the WFFI is unique because it approaches western forests and communities as a complex and changing social-ecological system that involves forests, fire, climate, and communities, says Fischer. The WFFI’s goal is to develop new ways of understanding and managing this social-ecological system.—Kelsey Keeves

John Vance (BS ’59) is no stranger to the threat of wildfires. He and his wife, Marion, live in Woodland Park, Colorado, on land that is bounded on three sides by the Pike National Forest. From his home, Vance can still see the firebreak from the 2002 Hayman Fire, a 138,000-acre burn that was then the largest fire in Colorado’s history. Since then, wildfires in the state have increasingly become larger, Vance notes, with last year’s fires exceeding 200,000 acres.

Vance spent 36 years with the United States Department of Agriculture (USDA)—26 of them with the U.S. Forest Service. During his long career, Vance dealt with his share of wildfires, and noticed three major changes over the years: Fire seasons became much longer (nearly year-round in some places); large fires became more prevalent; and fires are continuing to impact more and more communities—and in more devastating ways.

“Now, there are much higher values at risk—by that, I mean life and property—than in previous decades,” Vance says. “There is an urban-wildland interface, where there is much more residential development in forest situations than there was 60 or 70 years ago. In addition, forest fuels, or flammable materials, have become dryer and more combustible over the years given the increasing droughts facing the West and other parts of the country.”

Pre-suppression efforts, such as the management of forest fuels, is one solution that could help to prevent fires before they start, says Vance, but those efforts require “wholesale” coordination at the federal, state, and local levels.

“We need to conduct intensive fire hazard reduction work throughout the West, and perhaps the country at large, where we do careful planning as to which areas we treat first based on fire behavior predictions and the values at risk,” Vance says. “It’s being done now, but on a very fragmented basis. There needs to be a wholesale campaign to not only treat Western and national forests, but also federal, state, and private lands, too. It’s going to take a lot of players, consortium building, and additional funding to create this type of forest management initiative.”

Vance, whose career also included 10 years with the USDA Extension Service, says that “seeing ‘on the ground’ results from land management and believing that I had some influence in planning and educating to benefit the nation’s natural resources,” were the rewarding parts of his job. A career highlight was serving as District Ranger in the Pagosa District of the San Juan National Forest, where, as the manager of nearly a half-million acres, “it was a ‘hands-on’ job in blending production of timber, livestock forage, quality water, wildlife habitat, and multiple recreational opportunities,” Vance says. “It is the position where, looking back, I now wish I had devoted far more of my total career.”