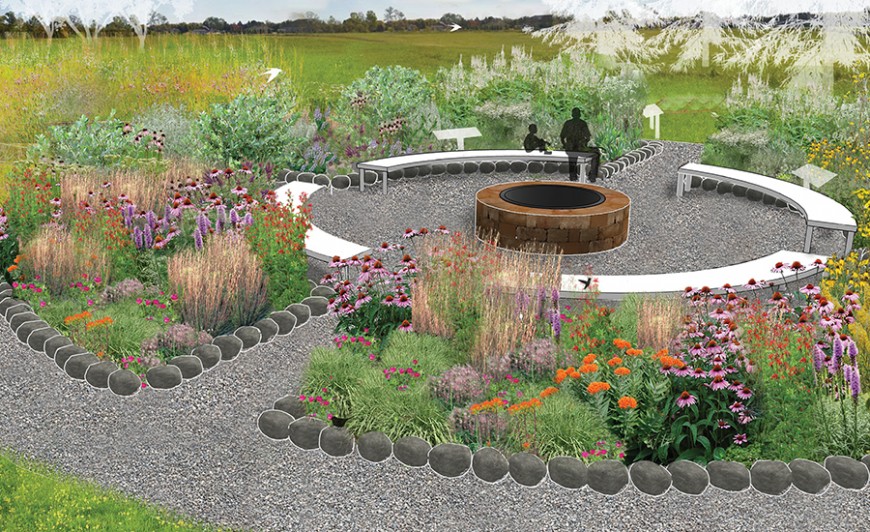 Ingrid Diran, director of GLACE, and visiting professor Margaret Noodin, an Anishinaabemowin language holder and poet, helped Roos brainstorm how her master’s practicum interests could be met: to bring Indigenous culture, aesthetics, and history into the field of landscape architecture. Noodin connected Roos with the Burt Lake Band, who were offered Roos’ landscape architecture skills to use in a way that benefited their community.

The Burt Lake Band had built an office on their 20-acre headquarters in Brutus, Michigan, and were still deciding how to better relate the landscape to the building and their needs. They also were mourning the loss of Isabel Scollon, the Band’s previous executive director, who envisioned this central gathering spot to be a “place of healing” for her people.

Tribal council members and Roos proposed a healing garden that would integrate the native plant knowledge, cultural beliefs and motifs, and traditional practices of the Anishinaabeg, a group of culturally related Indigenous people who span a variety of regions including Michigan, Minnesota, and Ontario.

The healing garden was named “Izhi-Minoging Mashkikiwan” in Anishinaabemowin or, translated to English by Noodin, “Place Where Medicines Grow Well.”

The medicine garden is the main feature of the project, but Roos also worked on the Anamikaag Gitigaaning // Welcoming Garden, Wiingashkojimaanan // Sweetgrass Canoes, Giizhikikaaning // Cedar Grove, and Enji-Baashkaabiigwaning // Flowering Meadow. There is also a short- and long-term parking/overnight camping site.

The garden was a partnership, with Roos deferring to the Band for input and guidance to ensure that careful cultural integration and collaboration took place throughout every aspect of the garden design.

“It was so important that the underlying design concepts come from members of the Band,” says Roos, who was advised by Dr. David Mitchner, curator of U-M’s Botanical Gardens and Arboretum, and Nola Parkey, executive director of the Burt Lake Band. “To me, a successful design creates an experience where members of the Band see themselves in this landscape, and they can continually rediscover that identity and their culture and learn from this place together as a community.”

A Medicine Wheel—a sacred teaching symbol in many Native American cultures—was incorporated into the healing garden. In the Anishinaabe traditions, the medicine wheel is represented as a circle with four even sections. Each section represents a different compass direction and color and is associated with other symbology. The Medicine Wheel also is apparent in the Burt Lake Band’s flag, whose colors coincide with the wheel. This cultural meaning can be seen through Roos’ integration of the 3D Medicine Wheel into the garden layout, as well as viewing each plant species as a bead that is a part of a larger design pattern.

In addition, the Band expressed a desire for Wiingashk, a sacred plant in their culture (known in English as Sweetgrass), to be a part of Izhi-Minoging Mashkikiwan. “The sandy soil at the garden drains very quickly and changes which kinds of native plants make sense here. Sweetgrass is native to Michigan, but not this particular site, because it requires a lot of water in the soil,” Roos notes. “A strategy that David Michener knew of involved sinking vessels in the ground that will trap the water and create a wetter microclimate in the contained soil. The idea of burying canoes arrived since it is an important instrument for water transport in Anishinaabeg culture.”

The garden planting was finished in Summer 2021 and was a collective effort of Burt Lake Band members as well as friends, neighbors, Saginaw Chippewa Indian Tribe members, and the UMBS community. There is still a need for funding for signs in Anishinaabemowin and English detailing different cultural aspects of the site.

“Getting to know the people from the Burt Lake Band has been the most memorable and meaningful part of this collaboration,” says Roos. “I can’t describe how rewarding it is to see this community view this project and landscape as theirs.”