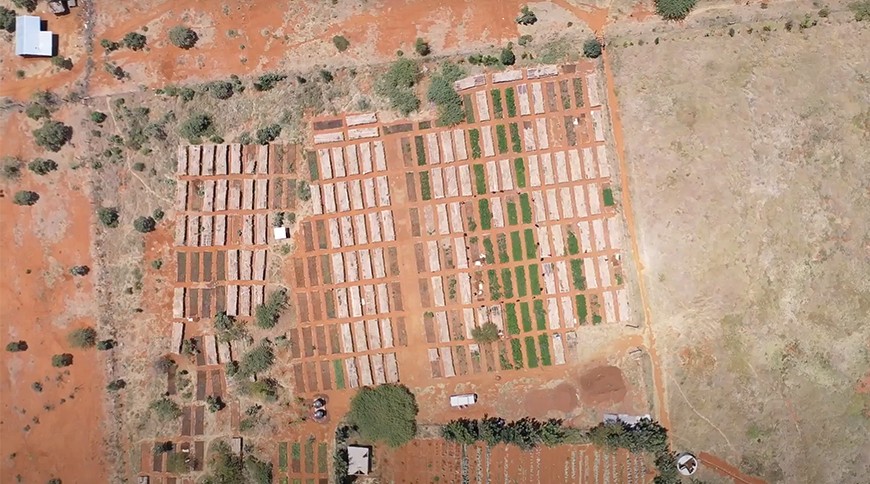 Andrew Kinzer stands in the pouring rain on a sodden hill in Kenya. He couldn’t be happier. “It’s great for the seedlings,” he says. His wife, Alex, joins him, smiling under the only shelter available—the hood of her parka. “We need trees,” she says.

And trees, millions of them, are exactly what these SEAS alumni bring.

As Africa Area Co-directors for Eden Reforestation Projects, Andrew (MS ’18) and Alex (MS/MLA ’17) Kinzer—in collaboration with a team of managers—have launched 25 project sites throughout Kenya, and have 700 staff members who have planted and maintained nearly 13 million trees in the past year and a half. The grassy slope where the Kinzers now stand will likely—in a few years’ time—be sheltered by a forest canopy once again.

Andrew and Alex have been with Eden since 2019, and are in charge of the nonprofit organization’s reforestation efforts in Kenya, Mozambique, and Ethiopia. In collaboration with its partners, Eden has planted more than 583 million trees around the world in Ethiopia, Madagascar, Nepal, Haiti, Indonesia, Mozambique, Kenya, and Central America.

“Our mission is really simple,” says Alex. “Our goal is to employ as many people as we can to plant as many trees as we can. Because we’re so focused, we’re able to be very effective.”

Alex notes that Eden is one of the few organizations that monitors the trees that they plant.

“It’s not just about plunking down the tree and walking away,” says Alex. “We create detailed planting strategies on the ground, and species selection that’s important for each site. I always tell people: Eden is the real deal. We actually do what we say.”

Andrew, who was born and raised in Kenya, and Alex, who grew up in Texas, met as undergrads in Illinois’ Wheaton College. After they married in 2012, the couple worked for a conservation organization in Kenya for two years before pursuing their master’s degrees at SEAS. They left well prepared for their current roles: Alex with a master’s of landscape architecture, along with a master’s in conservation ecology; Andrew with a master’s in environmental policy and planning.

A Matter of Scale

“When we were starting out in-country,” he says, “I asked a government forester about the amount of degraded forest under his control, and his answer was ‘roughly 4,000 hectares’ (the equivalent of nearly 10,000 acres). When he asked me how much we were interested in restoring, I told him, ‘All of it.’ And that we were ready to start the next month. Needless to say, he was a little surprised.”

These days, the Kinzers receive requests for planting projects from foresters within Kenya nearly every week. “These projects get a life of their own very quickly,” says Alex, “once people realize that we actually do what we promise.”

While the scale of Eden’s work is impressive, Andrew and Alex stress that the organization maintains its priority of putting “people first.”

“Eden’s approach to tree planting starts with the communities,” says Andrew. “We build relationships, and then work with those communities to be agents of the reforestation that’s happening on the ground.”

The work involves much more than the planting itself, Andrew explains. Local community members are hired to establish and run the nurseries, continue with the ongoing monitoring, and fulfill the follow-up enrichment plantings.

“We’re basically providing employment in quite literally some of the poorest communities—with the least access to resources—in the entire world,” says Alex. “Local people are making incredible opportunities for themselves with the income they make from Eden. It’s just amazing. Small businesses are popping up in these totally remote places, and you hear about people who have now sent their kids to university. And I admit, I’ve wondered ‘How?’ It takes days to even get here. How did they apply from here? But they found a way.” 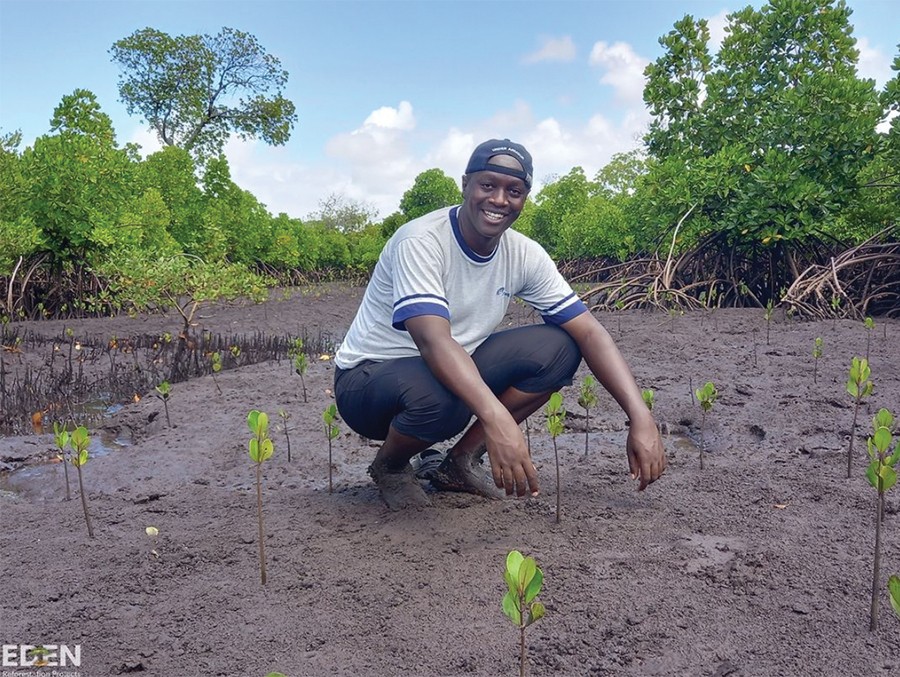 David, a native of Kenya, holds a Master’s degree in Mangrove Ecology. But when he met the Kinzers, he was stocking shelves at a sporting goods store due to a lack of job opportunities. Now, David successfully runs Eden’s mangrove program in Kenya. Andrew describes him as a “complete superstar.”

Andrew and Alex joined Eden during a period of exponential growth within the organization, and interest from business partners eager for plantings was especially high.

“It’s hard to describe to a business partner all the logistics that go into setting up a planting site,” says Andrew, “and that includes generating community engagement, establishing and building a nursery, sourcing seed, and germinating healthy seedlings. There’s a whole life cycle of a project that needs to happen before a project can actually launch.”

Alex describes what has become a typical Monday. “You wake up, and in your inbox, there is an email that says: we need a spot where we can plant a million trees within three days,” she says. “And that happens almost every week.”

“It’s hard sometimes,” says Andrew with a smile. “But it’s a good challenge to have, right?” 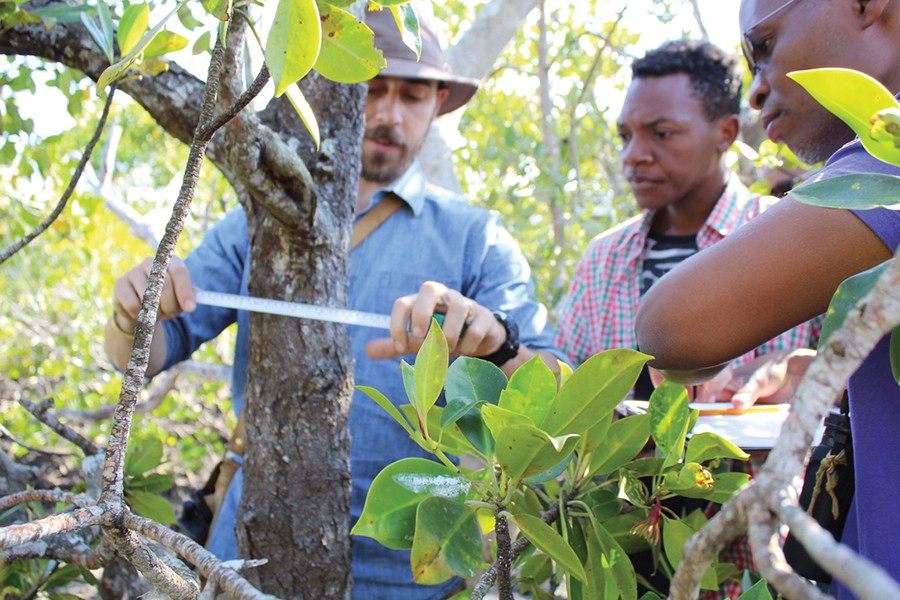 Eden’s reforestation projects in Kenya are still in their early stages, so it will be some time before former levels of biodiversity return. But in nations where Eden has been working for several years, there is much to celebrate: forest elephants grazing in previously deforested areas in Nepal; fish species, mangrove crabs, and prawns that had all but disappeared thriving again in Madagascar. And in a Kenyan forest—where a local organization, the Kijabe Forest Trust, has been working since 2013—there are reports of returning hyena, leopards, great porcupines, and a variety of forest antelopes.

Andrew notes that in addition to wildlife, the diversity of tree and plant species is also a vital component in the ecosystem.

“We’re focusing on planting species that are medicinally valuable to communities, both for human use and livestock use,” says Andrew. “We’re helping to bring back some of the functional safety net options for communities that they have relied on for millennia. Restoring that level of function and diversity is a very core part of the job.”

SEAS Experiences, Then and Now

Andrew relates that he continues to collaborate on research with SEAS faculty, and values the ongoing connections. “The faculty has remained continuously supportive even after we earned our degrees,” says Andrew. “I’m still in regular communication with a number of professors—such as Arun Agrawal, Bilal Butt, Steve Yaffee, and Julia Wondolleck. I know that they see a million students go through their classrooms, but they’re all still very much invested in and care about the people that go through their programs.”

Andrew reflects upon the value of the SEAS experience that he and Alex shared.

“The pace, the rigor of the work, the people and the professors we got to interact with—really taught us not just the hard skills of how to do a lot of these things, but also a lot of the mindsets that are needed to critically think about these problems, and determine a way to solve them that’s creative, thoughtful, and adaptable.”

“She was—and still is—a huge resource for me in terms of being a woman in leadership, and being a mom in leadership,” says Alex. “I think that people like her provide good examples to students like me who have big dreams, but who aren’t sure how to make them happen.”

Alex and Andrew have two daughters now, Liana, nearly 4, and Charlotte, just 6 months old. Alex recalls that she finished her master’s thesis at SEAS in her first trimester, and walked across the Rackham commencement stage while still carrying her daughter. “I guess that makes Liana ahead of the game academically,” she says with a smile. “She’s already graduated with me.”

At Home In Kenya

Co-directing Eden’s Africa Area projects while raising their young family in-country is, in many ways, a dream come true for the Kinzers.

“I enjoy living out here,” says Alex. “We have really wonderful colleagues, and the work is just great to be a part of. It’s what we always envisioned, and exactly what we hoped for after graduating.”

Andrew shares Alex’s satisfaction with where life—so far—has taken them.

“The fact that we have the opportunity to approach our plantings strategically—and that we have the funding to actually accomplish them—is incredible,” says Andrew. “For us, it’s like a constant process of actually doing the thing that the world urgently needs us to do.”

“It’s really empowering to do this work, and at this scale,” says Alex, “while knowing that we can always build more teams and plant more trees. So, this is the creed we live by: Do more. Plant more. Dream more.”