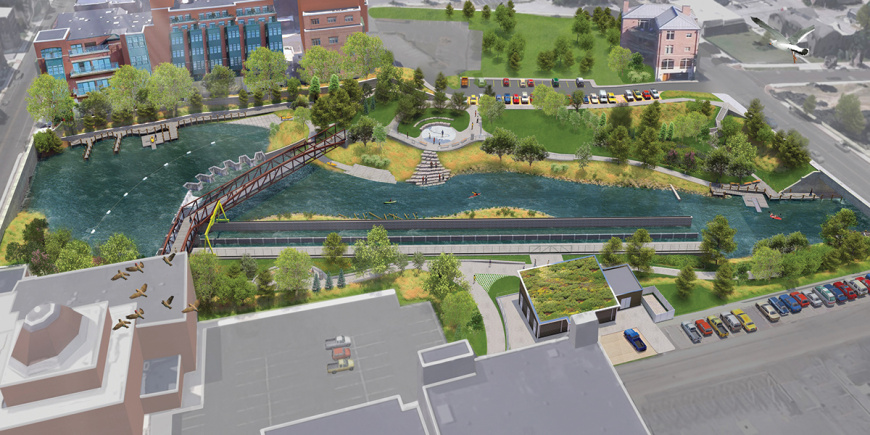 Caption
A rendering of the FishPass project, with the fish-sorting channel marked above. Image credit: AECOM

Invasive aquatic species such as sea lamprey have been wreaking havoc on the Great Lakes for at least a century. And a challenge that fishery managers continue to struggle with is how to allow desirable fish to pass through waterways to spawn while simultaneously keeping out “bad” fish. In Traverse City, a unique approach to selective fish sorting is being developed—and its inspiration comes from single-stream recycling.

Known as FishPass, it is the capstone of a 20-year project to restore the Boardman (Ottaway) River and reconnect it to Lake Michigan, according to the FishPass website.

FishPass will replace the aging Union Street Dam with a new vertical barrier that includes a fish-sorting channel that can separate fish based on their size, shape, color, swimming ability and other factors, in a similar way that single-stream recycling facilities sort glass, paper and metal according to their attributes, says Andrew Muir, science director of the Great Lakes Fishery Commission (GLFC) and a SEAS lecturer, who is also the FishPass project director.

“There’s a mixed assemblage of materials in single-stream recycling, and those materials arrive at a facility much like a group of fishes moving into a river would arrive at a barrier,” Muir says. “Those materials get sorted based on their properties, so we wondered if we could do the same thing with fishes.”

The intended result is that desirable fish will be allowed upstream, while harmful or undesirable fish like the invasive sea lamprey will be blocked from passing through the barrier.

“Our goal is to restore ecological connectivity so that native migratory fish can reach their spawning habitats in tributaries to the lakes and continue to repopulate,” Muir says, “while preventing harmful invaders from also reaching those habitats.”

If successful, FishPass—which is the first of its kind, according to Muir, and has involved collaboration from local, tribal, federal and state agencies and other organizations—could serve as a model for other tributaries elsewhere in the Great Lakes and beyond. Construction is slated to be completed in 2024.