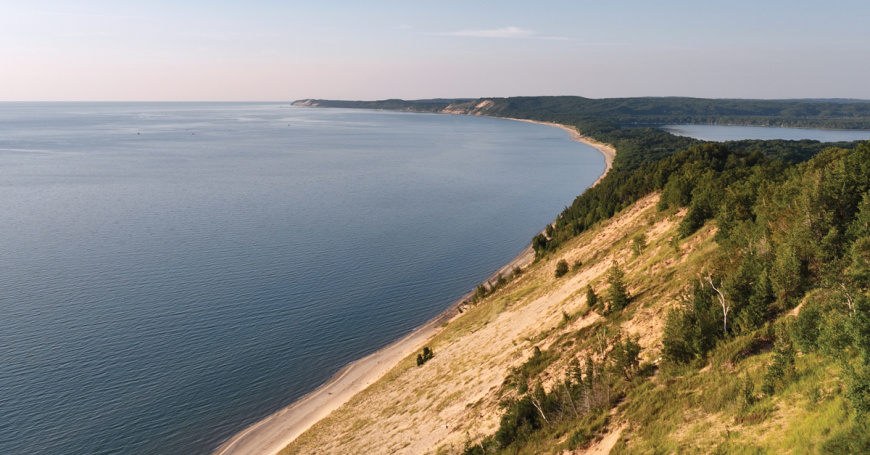 "I turned 60 last year, and sometimes I’m asked, ‘Glen, are you tired of this? Do you ever get bored?’ I tell them I’ve never been more fired up, and that I’m not going anywhere. We’ve got to finish what we started.”

Glen Chown (BS ’83, MS ’86), executive director of the Grand Traverse Regional Land Conservancy (GTRLC), has good reason to be “fired up,” and the countless Michiganders who have benefited from his advocacy throughout the decades are glad to hear that he’ll be sticking around.

Chown traces the beginning of his career to a paid internship he was awarded while completing his master’s degree. In the mid-1980s, The Nature Conservancy (TNC) Michigan chapter had a staff of only four, and Chown became its first intern.

That launch propelled him to the TNC Virginia chapter, and then on to Michigan’s Little Traverse Conservancy in 1988. Before long, Chown was approached by Rotary Charities, a nonprofit public foundation interested in establishing a conservancy to protect the Grand Traverse region from rapid overdevelopment. In 1991, GTRLC was incorporated—with Chown at the helm.

Asked what he is most proud of in his career, Chown doesn’t hesitate. “It’s the impact we’ve made,” says Chown. “We have 46,000 acres and nearly 150 miles of undeveloped shoreline protected in what is arguably one of the most beautiful places on the planet.

“I tell people I’m in the ‘forever business,’” he adds. “It’s not just for now, it’s forever. And that’s an incredible legacy.”

An achievement close to Chown’s own heart is the Coastal Campaign, launched in 2003—a multi-year effort to protect 6,300 acres of premium dune, farm and forest land along 3.5 miles of Michigan’s coast. The property owner, CMS Energy, was seeking private developers to purchase the tract.

“It was a David and Goliath story,” says Chown. “We were a small nonprofit with a staff of eight, and suddenly we needed to raise over $35 million in an incredibly short period of time. It was audacious. But we decided to give it our best effort, and leave no stone unturned.”

The first milestone—a $7.5 million challenge grant issued by the Mott Foundation—stipulated that GTRLC raise $5 million from local people in the 90 days between Memorial Day and Labor Day.

“Our third child had just been born, but my family rarely saw me that summer,” recalls Chown. “I was talking to people 24/7 about what was at stake. Amazingly, the entire community wrapped their arms around us. There were 18-year-old waitresses saving money for college at the Watervale Inn who contributed 50% of their tips. That’s one example of people making a heroic effort. We pulled it off. We realized that if you dream big, you can do big things.”

“I tell people I’m in the ‘forever business.’ It’s not just for now, it’s forever. And that’s an incredible legacy.”

In recent years, the Campaign for Generations protected more than 7,500 acres across five counties and 26 miles of undeveloped shoreline on rivers, lakes and streams. Nearly 90 projects were completed, including more than 20 new nature preserves, parks and natural areas. It also doubled its trail system, including universally accessible trails that people of all ages and abilities can enjoy.

“Ensuring that people have lifelong access to these beautiful places was the spiritual core of the campaign,” says Chown. “In the old days, we were protecting land from developers and from people. Our organization evolved to protect land for people.”

That message, says Chown, resonated deeply across communities. The campaign goal of $71.4 million was exceeded—reaching a total of over $94 million from approximately 6,000 donors.

Fired up for the Future

“We hope to welcome a dozen or more interns to the center who are interested in careers in conservation,” says Chown. “That’s one of our long-term goals at GTRLC—to help nurture the next generation of conservation leaders—and something that my alma mater and this organization could work on together.

“When I was at SEAS nearly 40 years ago, I was given a chance. And now I’d like to give that chance to the ones next in line.”