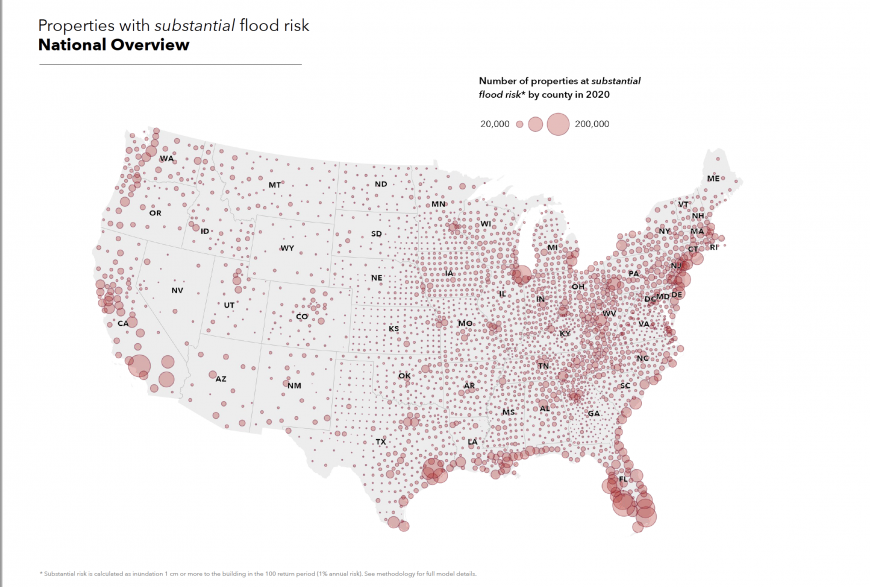 Know your home’s risk factors. That’s the premise of riskfactor.com, a free online tool developed by First Street Foundation where you can enter your home address and learn your property’s flooding or wildfire risk. Historic events, current risks, and projections about future flooding or wildfires—the comprehensive data is available for every homeowner to review, along with steps on how to act.

“Our goal is to communicate the risks of climate change to everyday Americans in an easily understandable way that’s available to everyone,” says School for Environment and Sustainability (SEAS) graduate Mike Kaminski (MLA ’14), who leads senior data solutions for First Street, a nonprofit research and technology organization. “We democratize the data so that anybody can see the environmental risks to their home and make informed decisions.”

When Kaminski joined First Street three years ago, he was brought on as an adaptation scientist to help develop the organization’s national flood model, which provides property-specific, climate-adjusted flooding data for homes in all 50 states, plus Puerto Rico.

Until recently, First Street had only provided users with flood risk data. That changed in May when the organization released data to help homeowners calculate the risk of wildfires to their properties in the lower 48 states.

“Flooding has been the costliest natural disaster tied to climate change since 1980, and wildfires are the fastest-growing natural disaster,” says Kaminski. “The reason we’re focusing on the individual property level is because we’re trying to help average Americans understand their personal risk and encourage them to take action.

“For people to care about something, you need to show them how it affects them personally—and nothing gets more personal than people’s homes, which is often their biggest financial asset.”

Wildfire risk, on the other hand, is calculated by the U.S. Forest Service, which provides its data to elected officials and fire managers for fire mitigation, but not at the local, neighborhood, or individual home level.

Data from these organizations also doesn’t factor in how climate change will affect flooding and wildfire risks in the future, which sets apart First Street’s offerings, says Kaminski, who has a graduate certificate in geographic information systems (GIS) from SEAS and led the creation of the modeling mechanisms used to incorporate “flood defense” infrastructure into First Street’s national flood model.

“Before First Street, there was no comprehensive centralized source of adaptation data,” he says. “Databases do exist (such as the Army Corps National Levee Database), but these are only narrowly focused on one flood infrastructure type. Our database incorporates many different types of infrastructure projects, all in one place.” 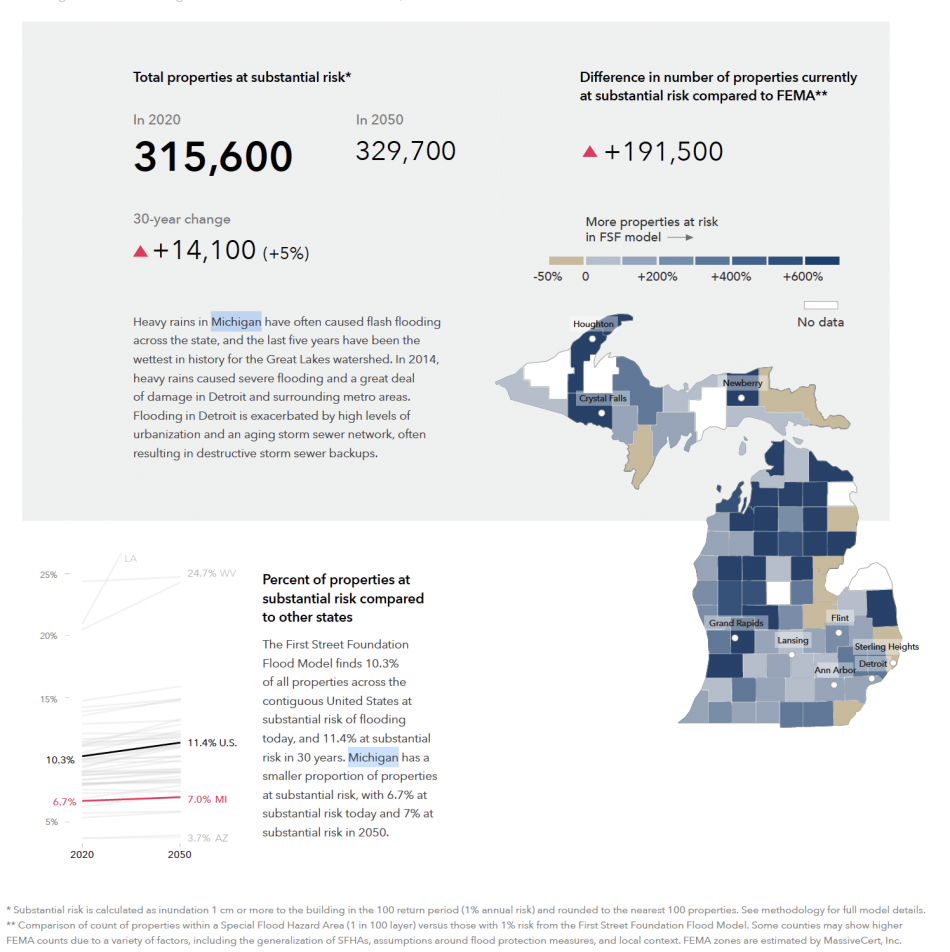 This graphic from First Street Foundation provides an overview of the State of Michigan’s flood risk. In 2020, 315,600 properties had a substantial risk of flooding. Over the next 30 years, the number of properties with this risk will increase by another 4.5%, bringing the total number of properties with substantial risk to 329,700, according to the organization. Source: First Street Foundation’s First National Flood Risk Assessment

“Our team researched more than 23,000 projects across the country that are protecting against flooding,” he added, “and we incorporated them into our flood model, which gives you a much more realistic look at what’s happening with your property now, and how flooding might affect your property 30 years into the future,” which is the typical duration of a mortgage.

Kaminski stresses that First Street’s data isn’t meant to compete with, but rather complement, data provided by FEMA and the Forest Service to arm homeowners with enough information to make decisions about climate change risks.

It’s the same rationale as to why First Street gives public-sector agencies access to its data at the ZIP code, county, and congressional-district levels: so that policy makers can use it to enact climate change measures, such as creating resilience plans or making infrastructure improvements, Kaminski says.

“For the most part, other organizations that have data like this are private and have a vested interest in not letting this data get out or only giving it to people who will pay them for it,” says Kaminski. “Our Research Lab is a unique opportunity for researchers to get their hands on this kind of data, free of charge, which has been peer-reviewed. First Street’s methodologies are completely open for anybody who wants to see how the organization is calculating its data.” 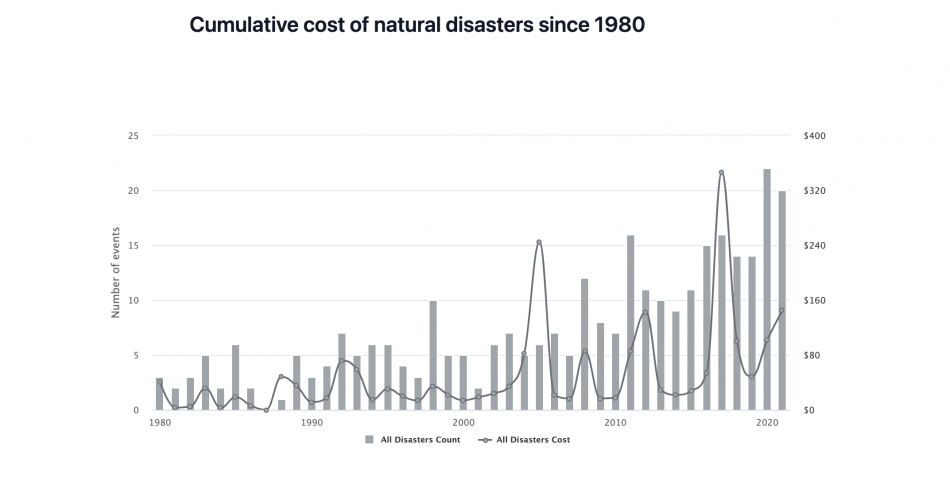 Kaminski, who had been a practicing landscape architect before joining First Street, has focused his career on finding ways to manage flooding. Some of his previous workplaces, though, including a civil engineering office, didn’t put as much emphasis on addressing the flooding problem as Kaminski would have liked. When he was hired by First Street, he knew he had found the right fit.

“I’ve always been passionate about flooding, even when I was a landscape architecture student at Michigan,” says Kaminski, who earned bachelor’s and master’s degrees from Binghamton University in New York, where he became interested in landscape architecture after doing a literature review of Nassauer’s research on maximizing ecosystem services of natural green space.

Nassauer’s work led Kaminski to the SEAS Master of Landscape Architecture program, to which he was drawn because of its emphasis on ecology. He developed an interest in flooding and stormwater management thanks to the school’s course offerings, such as Nassauer and Professor Allen Burton’s Urban Stormwater: Science, Design, and Management course, as well as Mike Wiley’s Fluvial Ecosystems course, where he learned about streams and waterways. Kaminski’s master’s project team was advised by Nassauer in a groundbreaking collaboration with the Jefferson East Business Association in Detroit. Their project used an engineering systems perspective to address green infrastructure stormwater management in floodplain locations.

“I realized flooding was a huge issue that everybody has to deal with,” Kaminksi says, “and it’s one that is constantly changing.”

Finding ways to convey detailed information in a visual manner that resonates with people is what Kaminski finds appealing about his work at First Street Foundation.

A self-described GIS enthusiast, Kaminski used his GIS skills to develop the spatial geodatabase of flood defense infrastructure projects for First Street’s flood model. After it was released, Kaminski shifted to a data solutions role, and now works with third-party entities such as ESRI’s Living Atlas of the World to get First Street’s data onto their platforms. Most recently, he’s taken on a product management role for the forthcoming Risk Factor Pro platform, where additional risk information will be available to users about their properties, including interactive maps.

“The goal is to help scale our data in a much more intuitive fashion for users. If you can take a complex scientific idea and present it in a visually compelling manner, you’re going to reach the broadest audience,” says Kaminski. “One thing First Street does well is creating tools that are very visual heavy, such as infographics and maps, where people can learn about the complex issue of flooding or wildfires in a way that’s quick hitting and they say, ‘Oh, I get that.’ GIS opens up the world of data in a spatial format that is visually easy to digest.”

Reflecting on his SEAS experience, Kaminski says the opportunity to take classes beyond landscape architecture resulted in a well-rounded education that provided numerous career advantages. “There’s so much potential with a Michigan degree,” he says, “and I really attribute it to me getting my first job and all the opportunities that I've gotten along the way. So, there is a difference.”