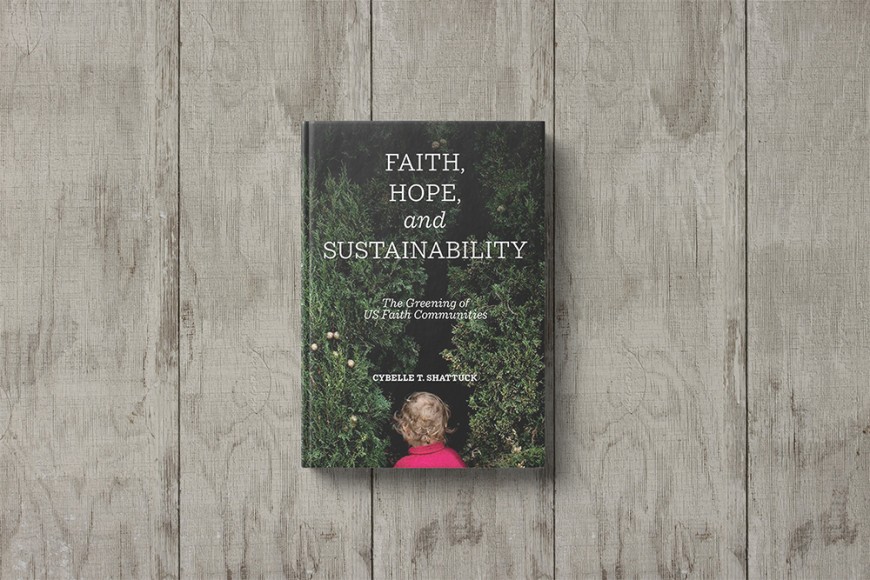 What is the role of faith communities in creating a more just and sustainable world? How do those communities transform intention into action? What makes those actions lasting?

Those are some of the questions that School for Environment and Sustainability alumna Cybelle Shattuck (MS ’11, PhD ’16) sought to answer in her most recent book, “Faith, Hope, and Sustainability: The Greening of US Faith Communities” (SUNY Press, 2021). In it, she explores the experiences of 15 faith communities striving to care for the earth and live more sustainably.

Shattuck’s extensive fieldwork research took her to nearly every region of the country. Among the communities she visited: a church in Maine partnering with fishermen to create the first community-supported fishery, enabling them to make a living without overfishing; Benedictine Sisters in Wisconsin restoring 100 acres of prairie, reviving their community in the process; Presbyterians in Virginia, dismayed by air pollution in Shenandoah National Park, advocating for improved national air pollution policies; and a Jewish congregation constructing a LEED-certified synagogue near Chicago.

Shattuck, an assistant professor at Western Michigan University, holds a joint position in the Institute of the Environment and Sustainability and the Department of Comparative Religion. Her research—which focuses on the intersection of ecology and religion—comes alive in these community stories. The book, however, goes much further and offers a framework on process that is highly useful to scholars as well as non-academic communities interested in launching sustainability programs.

Shattuck explained that the entire project—beginning with the doctoral dissertation that formed the basis of her book—was inspired by a book she read in her first semester at SEAS: “Making Collaboration Work: Lessons from Innovation in Natural Resource Management” (Island Press, 2000) by SEAS Professors Julia Wondelleck and Steve Yaffee.

“Their research was based upon the idea that to find out what works,” says Shattuck, “talk to the people who figured it out.”

Shattuck determined that she would follow a similar pattern of study with faith communities involved in ongoing sustainability projects.

“Faith communities have traditionally had an oversized influence on society, and they remain some of the most viable collective-action groups that we have,” says Shattuck. Citing the abolitionist movement, she notes that faith communities can provide moral leadership that pushes societies to change, as well as institutional training that gives people the skills to effect change. Therefore, Shattuck asserts, faith communities involved in environmental and climate action play an important role in making things happen.

“Much of the research on religious communities in relation to the environment has focused on theology,” says Shattuck. “The literature proposes that people of faith have values that should lead them to care for the Earth—whether they’re Muslim, Jewish, Hindu, Buddhist, or Christian—because their teachings evolved at a time when people were far more closely connected to nature. They had all kinds of information about how to care for trees, the soil, and their animals.”

Finding the spiritual foundations that connect to environmental issues is valuable, says Shattuck, and contributes to the durability of an initiative. But the next step, she emphasizes, is to translate those beliefs into action. Exploring how actions emerge is her primary interest.

“It's not enough to join the Sierra Club if people believe the Bible teaches about care for the environment,” says Shattuck. “People I interviewed felt that, ‘If we believe that we’re called to heal the world, to do tikkun olam in the Jewish tradition, then we must actually ‘walk that talk’ here in our synagogue, in our church.’ They made it part of their community’s mission.”

Shattuck’s case analysis indicates that implementation of initiatives was facilitated by pastors who regularly highlighted the importance of Earth care as part of their religious tradition and helped green teams figure out how to connect with various ministries for worship, education, and social programs. It also helped if the decision to engage in Earth care involved the whole congregation. Community-wide “buy-in” meant more resources—e.g. volunteers and money—to support the initiatives.

“My sense of whether we can make changes was strengthened greatly by meeting people who are doing the work, and then looking at the processes and practices that made these changes durable. I became so aware of how much community mattered in helping people to keep going, even when they felt depressed or concerned or despairing.

“One of the things, in fact, that’s so difficult with our sustainability dialogue is that so much of it is predicated on what we don’t want to happen. The beauty of faith traditions is that they hold up a vision of what the future could be: one that’s moral and just and thinks about the well-being of all the different members of a community and the environment.”

“I’ve had a couple of chances to give Earth Day sermons, and I always build them around this: It’s actually ‘faith, hope, love, and sustainability,’ because I think it’s love that motivates us to take action. We may be angry, scared, or overwhelmed, but we will work to protect the people and the things we love.

“I grew up in Redwood Canyon. The thought that those trees that predate our nation by many hundreds of years may cease to exist because of what we’re doing to the climate—makes me feel like I would become homeless—because the place that I know as home would cease to exist.

“So, I'm motivated to save those trees because I love them, and just as love motivates action, faith sustains the action. Whether secular or sacred, our communities give us the sense that if we live our values—even if we’re not sure we can accomplish the goal that we’re striving for—we still must try. Because otherwise we’re not being the people we want to be in this world.

“Hope is a part of it, too. People I interviewed said: ‘Faith teachings tell us that if we do our best, there will be a good outcome that will take us to something better. That gives us reason for hope.’”