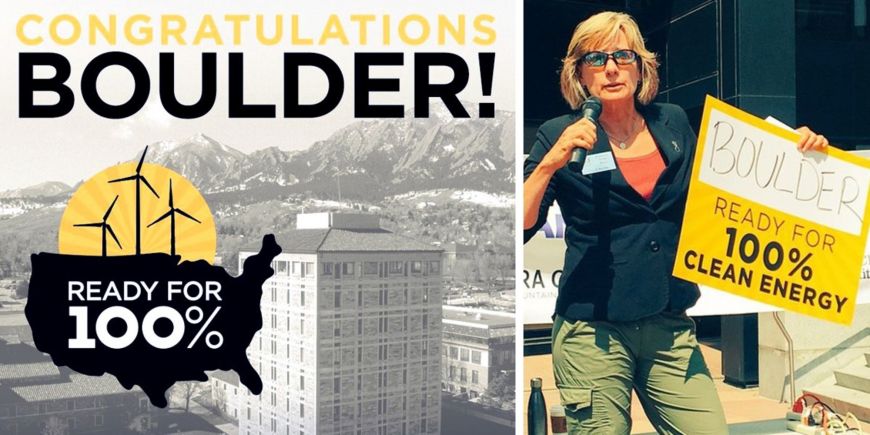 Suzanne “Zan” Jones grew up in a blue-collar neighborhood in Kansas City, but her family spent their summers hiking Colorado’s high peaks and swimming her whitewater rivers. The combination of childhood experiences in the inner city and the western wild catalyzed her desire to pursue a career that couples environmental advocacy with public service.

After nearly 20 years with the National Wildlife Federation and the Wilderness Society, Jones decided to run for office. She first earned a seat on the Boulder City Council, and then was elected mayor. “My primary motivation to run for local elected office was a realization that, because of a lack of national leadership, it was up to cities to craft and push for solutions to address climate change,” Jones says.

Throughout her career, Jones has helped craft, adopt, or put on the ballot some of the most progressive local policies and programs in the country, including: the nation’s first carbon tax on energy usage, an aggressive climate action plan aimed at reducing greenhouse gas emissions 80% by 2050, innovative multi-modal transportation solutions, a universal Zero Waste ordinance requiring recycling and composting by all residences, businesses, and institutions in Boulder, and more — all while wrestling with important social issues such as housing affordability, livable wages, homelessness, and inclusiveness.

Her mayorship provides only a nominal per-meeting stipend; for her day job, she runs Eco-Cycle, a community nonprofit that promotes and implements recycling, composting, and other Zero Waste solutions. “While most climate efforts are focused on smokestacks and tailpipes (i.e., energy and transportation), what goes into our trash cans (i.e., consumption) is the third leg of the climate stool,” comments Jones. “How we make, transport, and dispose of our food and ‘stuff’ creates 42% of our greenhouse gasses.”