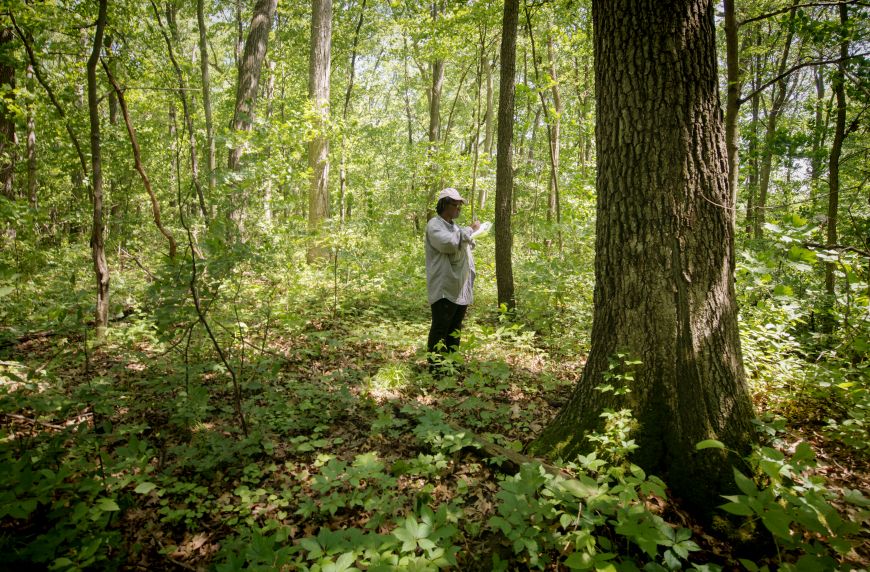 SEAS Associate Professor Inés Ibáñez was a member of the research group that produced the paper, “Adjusting the lens of invasion biology to focus on the impacts of climate-driven range shifts,” published in the journal, Nature Climate Change, on April 30.

AMHERST, Mass. – For many years, the conservation community has embraced the idea that improving connectivity, that is, creating corridors so species can follow their preferred climate, will benefit biodiversity, says Toni Lyn Morelli at the University of Massachusetts Amherst’s Climate Adaptation Science Center.

In a new perspective paper with co-first author Piper Wallingford at the University of California, Irvine, Morelli and other colleagues address that disconnect. Writing in Nature Climate Change, they propose that reconciling these differing views will allow for better management of species that are shifting their ranges because of changing climates.

Morelli says, “This is us saying let’s be thoughtful about this, let’s have a dialogue. We’re going against two decades of established wisdom and we expect some pushback, but really any discussion will be helpful. We’re not saying that no species should move around. In fact, most species will have to move to avoid extinctions from climate change. But let’s look at what that means.”

To that end, Morelli, Wallingford and colleagues suggest using a tool like the Environmental Impact Classification of Alien Taxa (EICAT) – developed by the International Union for Conservation of Nature – to assess risk and develop management priorities. They write, “By adapting existing invasion risk assessment frameworks, we can identify characteristics shared with high-impact introductions and thus predict potential impacts.” Further, “Ecological impacts of range-shifting species could be predicted by leveraging knowledge of invasion ecology and existing risk assessments.”

The authors also point out that “with the exception of some problematic species, few studies have assessed the community and ecosystem impacts of species tracking their climate into new areas. The lack of studies on range shift impacts is surprising given that the introduction and spread of new species is often viewed by ecologists through the lens of invasion biology, where the primary concern is the potential for negative impacts on the recipient community.”

They recommend considering the ecological costs and benefits to recipient communities and ecosystem processes. Morelli adds, “If species that would have massive impacts are expected to move, we could know ahead and potentially take steps to stop or slow that.”

Wallingford adds, “Our point of view is that more information is better. We can weigh the risks for both range-shifting species and the communities they’re moving to and then use those assessments to develop a strategy. In some cases, we may want to limit the extent of a range shift, but other range shifts may need to be helped along – with endangered species, for example.”

The authors point out that as species from many taxonomic groups and ecosystems are redistributing towards higher latitudes and elevations in response to climate change, range shifts can no longer be seen as overwhelmingly beneficial to biodiversity conservation.

They urge more attention to “the importance of considering the ecological impacts of range-shifting species in terms of both the benefits, particularly to their persistence, as well as the potential costs to recipient communities and ecosystem processes."