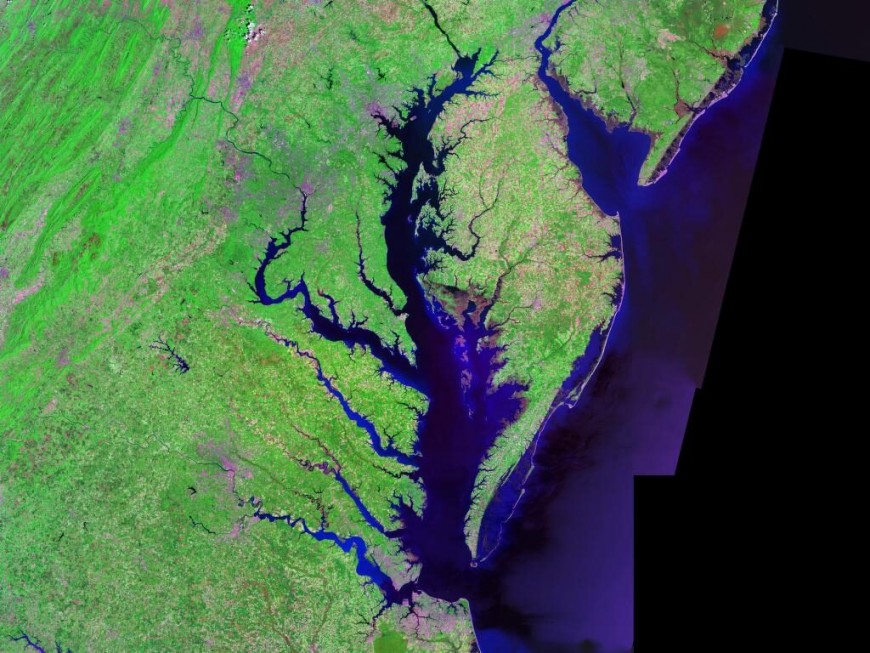 The Chesapeake Bay Program and its partners, including the University of Michigan, released information today on the state of the 2021 Chesapeake Bay “dead zone.” While last year’s dead zone was the second smallest observed since 1985, this year’s assessment paints a more complex picture of the bay’s health.

This year’s assessment confirms the earlier forecast of a slightly smaller than average dead zone, due to reduced spring rainfall and less nutrient-rich runoff flowing into the Chesapeake from the watershed.

Among these institutions, the Maryland Department of Natural Resources, Virginia Department of Environmental Quality and Old Dominion University conduct nine cruises between May and October to track summer hypoxia in the bay. Results from each monitoring cruise can be accessed through the Eyes on the Bay website for the Maryland portion of the bay and the VECOS website for the Virginia portion.

Scientists at the Virginia Institute of Marine Science, in collaboration with Anchor QEA, use computer models combined with local weather information, to produce daily real-time estimates of dead zone size throughout the summer. Based on the nine monitoring cruises conducted between May and October 2021, the Maryland Department of Natural Resources assessed that the dead zone was only slightly below average in 2021.

On the other hand, the model simulations provided by the Virginia Institute of Marine Science and Anchor QEA indicated that the dead zone was slightly more extensive than average, largely due to the duration of the dead zone in 2021. However, both estimates suggest a near-average size dead zone for this year.

“Monitoring of hypoxia and other Chesapeake Bay water quality and habitat conditions provide valuable data to assess and improve the health of the bay,” said Mark Trice, chief of the Water Quality Informatics Branch at the Maryland Department of Natural Resources.

“Maryland and its Chesapeake Bay Program partners are working towards achieving nutrient and sediment pollution reduction goals that will provide improved habitat for iconic species such as crabs, oysters and rockfish, while fostering a robust economy that those bay resources support.”

Since 2007, a model developed by the University of Michigan has been used to forecast the volume of summer hypoxia for the main stem of the Chesapeake based on the amount of nitrogen pollution flowing into the bay from the Susquehanna River from the previous January through May. The model is informed by data provided by the Chesapeake Bay Program, Maryland Department of Natural Resources, Virginia Department of Environmental Quality and U.S. Geological Survey.

“The general agreement between the multiple methods used to assess the size of this summer’s dead zone is reassuring,” said Marjy Friedrichs, a research professor at the Virginia Institute of Marine Science. “The relatively average dead zone size, despite warming summer temperatures, is a testament to the success of management actions that have reduced nutrients entering the bay.”

Weather conditions play a large role in the size and duration of the annual dead zone. Below average river flows, due to less springtime rainfall bringing nutrients and sediment into the bay, is believed to have played a role in the smaller than average dead zone noted during monitoring cruises conducted from May through July.

However, due to calm winds, increased precipitation and warm temperatures throughout late summer 2021, conditions were perfect for the dead zone to grow larger than it had during this time than in previous years. For example, temperatures in August and September were recorded as the fifth hottest on record for those months in Maryland, according to the National Oceanic and Atmospheric Administration.

Despite the short-lived high winds and cool temperatures associated with the passage of Hurricane Ida remnants, the September dead zone remained above average in size throughout the month and well into October. Overall, the 2021 dead zone lasted longer than 89% of those recorded over the past 36 years.

“While this year’s complex seasonal dynamics led to a smaller than predicted July dead zone, the summer average and total annual forecasts were quite accurate, underscoring the value of tracking and predicting longer-term conditions,” said U-M’s Scavia, a professor emeritus at the U-M School for Environment and Sustainability.

The primary way nutrients can enter the bay is through its tributaries in the watershed. Higher river flows bring increased amounts of nutrient pollution into the bay. Despite lower flows in spring 2021, the U.S. Geological Survey reported that the average for the water year (measured from Oct. 1, 2020, through Sept. 30, 2021) was higher than normal, with flows entering the bay at an average of 84,880 cubic feet per second, which is above the long-term average of 79,000 cubic feet per second. Estimates of river flow and nutrients entering the bay can be accessed on the U.S. Geological Survey’s website.

The dead zone is an area of little to no oxygen that forms in deep bay waters when excess nutrients, including both nitrogen and phosphorus, enter the water through polluted runoff and feed naturally occurring algae. This drives the growth of algae blooms, which eventually die and decompose, removing oxygen from the surrounding waters faster than it can be replenished. This creates low-oxygen—or hypoxic—conditions at the bottom of the bay. Plant and animal life are often unable to survive in this environment, which is why the area is referred to as a “dead zone.”

“This year’s estimate of the Chesapeake’s dead zone illustrates the challenge between Chesapeake Bay Program management actions and climate change that brings increased rainfall volume and river flows,” said Michelle Price-Fay, acting director of the Environmental Protection Agency’s Chesapeake Bay Program Office. “While the long-term trend is toward a reduction in hypoxia due to management actions taken throughout the watershed and airshed, warming from climate change is a headwind that may increase hypoxia’s duration and extent.”