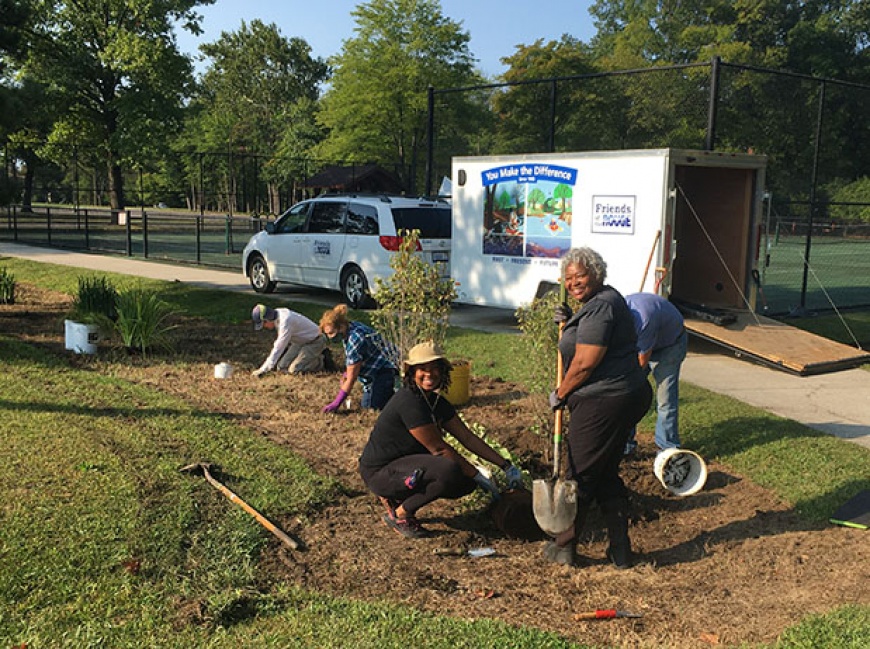 Growing up in Tucson, Arizona, may have been an unlikely start for a leading rain garden designer. But perhaps that’s what inspired Matthew Bertrand (MLA ’17) to devote his career to the care and management of water.

Bertrand, a graduate of the Master of Landscape Architecture program at the U-M School for Environment and Sustainability (SEAS), has called Michigan home for more than a decade now, and currently serves as Senior Restoration Coordinator at Friends of the Rouge (FOTR), a nonprofit organization that works to restore, protect, and enhance Metro Detroit’s Rouge River.

He has designed and/or built over 100 rain gardens—a landscape feature that captures stormwater run-off and puts it to good use. Instead of contributing to floods or adding pollution to rivers, the filtered water recharges the groundwater below while nurturing a lush garden of perennial native plants above.

To encourage widespread adoption, FOTR partners with Washtenaw County Water Resources to offer the Master Rain Gardener Training Program—a set of courses that teach residents how to install and maintain successful rain gardens on their own property.

“These neighborhood rain gardens don’t prevent floods by themselves,” said Bertrand, “but a neighborhood network of rain gardens can make a real difference. It's also about engaging a community in the solution by building knowledge. People are now showing up at community meetings and volunteering to maintain public rain gardens. They have become ambassadors for stormwater, and as a result, they are ambassadors for tackling climate change and making their communities more sustainable.”

A project that Bertrand is especially proud of is located at the Plymouth Arts and Recreation Complex (PARC). The PARC project, funded by a Michigan Department of Environment, Great Lakes, and Energy (EGLE) grant of roughly $400,000, features 23 rain gardens spanning the facility’s 20,000 square-foot reconstructed parking lot, and is one of the largest bioretention sites in Michigan.

Along with a few partners, Bertrand envisioned the concept for the project, and was involved every step of the way—from the grant process to the design and implementation—which included directing 600 volunteers. The offices of FOTR are now located at the PARC and serve as the epicenter of its restoration activities.

Throughout his five years at FOTR, Bertrand has been passionate about the health and history of the Rouge River.

“It flows right through the heart of metro Detroit,” said Bertrand. “It's the river on which the automobile was birthed and that supported the arsenal of democracy through World War II. It’s the river that caught fire—along with the Cuyahoga River—which helped to trigger the Clean Water Act as well as some of Michigan's major environmental legislation. Rouge communities are also among the most racially segregated in the country, combining largely wealthy upstream suburbs with downstream communities experiencing both a legacy of and ongoing environmental injustice.”

Bertrand believes that despite its difficult history, the Rouge—though still heavily polluted—has come a long way, as evidenced by its new 27-mile water trail.

“It's gotten healthy enough that we're working with communities along the Lower Rouge, predominantly low-income and minority, to embrace the river,” said Bertrand. “We’re building canoe and kayak launches throughout that area so people can get on the river, and we’re holding guided paddles and land-based pop-up events to help people to see themselves as potential paddlers and to take their first steps.”

The Rouge is one of the most urbanized rivers in the U.S. and it’s also one of the most accessible. The water trail travels through a variety of environments—passing the Ford industrial complex as well as natural areas.

“There are about 1.3 million people that live near that river, so it's one that people have a lot of relationship with,” said Bertrand. “In my role at FOTR, my job is to work towards improving it, and we've got a watershed management plan that guides my efforts.”

Offshoots of that plan now extend beyond the 467 square-mile Rouge River watershed.

“Most people relate to community geographies, not watershed geographies,” said Bertrand. “That means I’m often contacted by people from outside the watershed interested in getting services, so we’ve been trying to think more broadly.”

That approach has resulted in collaborative relationships with adjacent watershed groups such as the Huron River Watershed Council—that has partnered with FOTR on green stormwater infrastructure, joint grants, and a diversity, equity, and inclusion audit.

“We've been envisioning the notion of creating collaborative services and branding, rather than each organization doing their own marketing plan,” said Bertrand. “How do we communicate about green infrastructure? We'll do it together—with a shared set of messaging.”

To support that messaging and build more opportunities for collaboration, FOTR will soon roll out an ArcGIS-based online platform designed to encourage residential engagement. The site features a map that indicates the goals and progress of neighborhood projects across seven counties—with the option to submit ideas.

“The map provides a way to visualize what’s happening in communities across southeast Michigan,” said Bertrand, “and will help people to understand the relationships between different watersheds. It's also goal oriented—and invites people to join in the process of working towards those goals while serving as a tool to track and measure the results. I think it’s going to become a national model.”

Among other FOTR initiatives, the “Rain Gardens to the Rescue'' program provides financial investment in residential rain gardens in the City of Detroit. And in 2020, Bertrand spearheaded the FOTR web store that sells rain barrels and native plants—along with consulting services to help residents think more comprehensively about their landscapes. Now just beginning its third season, the store has already generated over $100,000 in revenue.

Bertrand, who has recently begun working on a project with SEAS landscape architecture professor Runzi Wang, shared a few thoughts about his SEAS experience: “The professors—experts in their field—presented us with challenging work that forced me to think multidimensionally. And I'm grateful for the time that I had with my fellow students as we learned from each other about different ways to approach these challenging scenarios. There couldn’t have been a better preparation for the kind of community work that I'm doing now.”